After Hours: At Gyu-Kaku you cook your meal yourself 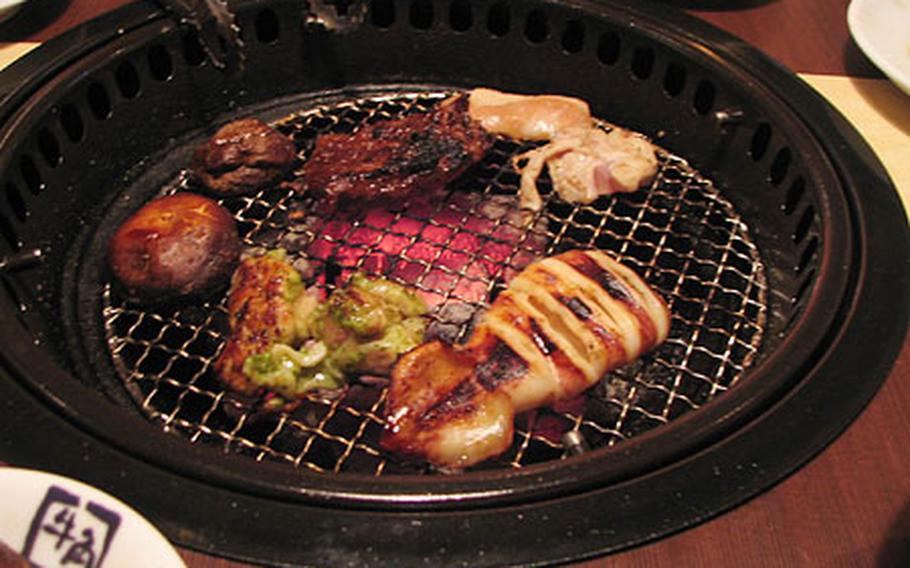 What are you hungry for? Shiitake mushrooms? Beef short ribs? Chicken in a basil pesto sauce? Squid? They have it all at Gyu-Kaku. Cook it your way. (David Allen / S&S)

That&#8217;s what I like about yakiniku restaurants. Let&#8217;s just cut out the middle man. Bring me the meat and veggies and I&#8217;ll barbecue them to my own liking right at my table.

In other parts of the world, this would be known as a Korean barbecue. I just call it good eats.

Gyu-Kaku&#8217;s Awase location &#8212; it&#8217;s a chain found throughout Japan &#8212; is one of the newest yakiniku on Okinawa and is a bit upscale. Charcoal logs placed in the pit in the middle of your table provide the heat. And the servers will change the grill when it gets too caked with greasy charred chicken bits.

The meat is also well prepared. Instead of plain chunks of chicken, my plate came with chicken marinated in a delicious basil pesto sauce. And there was decidedly less fat than the fare at some of the all-you-can-eat, help-yourself style yakiniku.

It was all good. So good, in fact that I suffered brain fog several times, my chopsticks poised over several selections, unable to decide what I wanted to eat next.

With soft drinks, the tab was a meager 5,100 yen. Not bad for an evening meal for two.

A word of warning, however: The serving staff spoke very little English, so it might be a good idea to bring along a Japanese friend. However, there is a picture menu in English, so more adventurous diners should be fine.

To see previous After Hours reviews, go to legacy.stripes.com/afterhours

Specialty: Raw meat, technically. But seasoned and ready for the grill at your table. Also, be sure to try the &#8220;Bibinba&#8221; rice!

English menu: In the form of a picture menu.

Clientele: Mix of Okinawans and Americans.