After hours: A bar with history 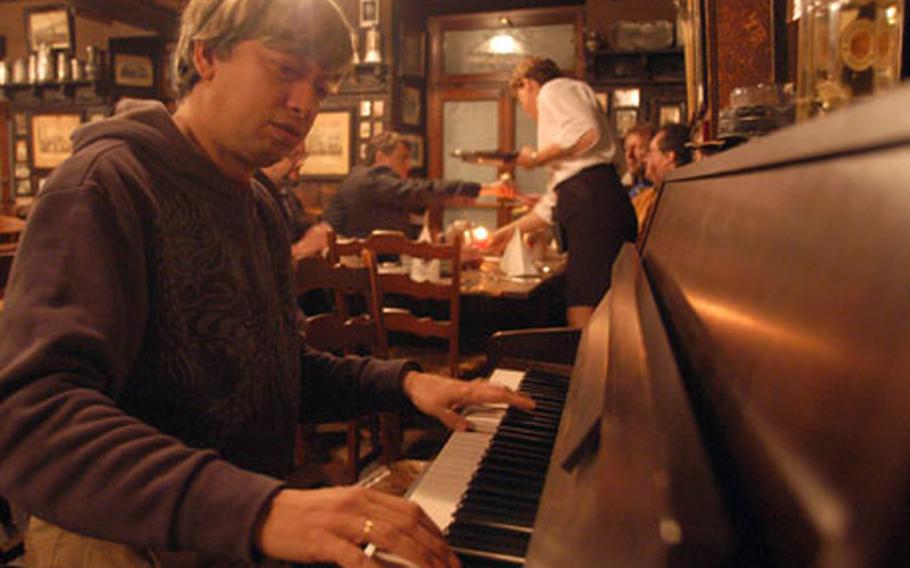 Rudi Scheffler, piano man at the Zum Roten Ochsen, taps out a tune at dinner time Feb. 28. Scheffler has played piano at the Ochsen - a student pub - for the past 13 years and was there for the building&#39;s 300th anniversary in 2003. (Matt Millham / S&S)

Sure, these are all great, but if I had to pick my favorite thing about the Zum Roten Ochsen, it&#8217;d probably be the autographed photograph of Mark Twain hanging on the wall. I&#8217;ve been told by my waitress, whose credibility I&#8217;ve been given no reason to impugn, that the photo and its ancient blue ink script are the real deal. She didn&#8217;t use those words, but that&#8217;s what she meant.

The Zum Roten Ochsen &#8212; that&#8217;s Red Ox Inn to you English-only speakers &#8212; is best known as a student pub, though there are few, if any, students in the joint on weekdays. It&#8217;s on the weekend they crowd the place. When I show up on a Wednesday evening it&#8217;s just me, the piano man, a table of Japanese businessmen and a German couple for the first hour or so.

This was a perfect situation in which to study the Red Ox. The walls, ceilings, tables and chairs are covered in more than a century&#8217;s worth of graffiti in more than a dozen languages.

The Red Ox&#8217;s piano man is a zany fellow with an early Beatles haircut and a penchant for oldies. He&#8217;s also, dare I say, awesome. In between heartfelt renditions, the piano man, Rudi Scheffler, takes time out to talk to himself and his audience.

But I&#8217;m upset with myself that I waited until now to try the Ox. If I&#8217;d shown up a month or so earlier, I could have taken part in the meat extravaganza known around here as &#8220;Slaughterfest Week,&#8221; during which they feature a plethora of regional and German sausages and meats. I prefer to think of it as Sin City with a side of beef.

To see previous After Hours reviews, go to: legacy.stripes.com/afterhours