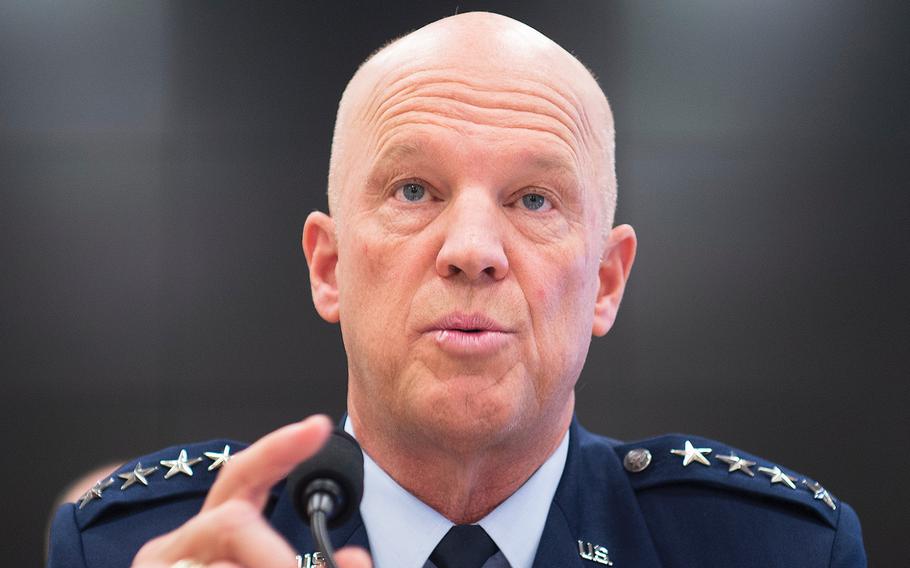 WASHINGTON — Space Force leaders on Wednesday insisted to some skeptical House legislators that they would keep the new service branch small and hyper-focused on operating and defending the U.S. military’s critical space assets long into the future.

In a pair of hearings on Capitol Hill, top leaders of Space Force testified the sixth military service would build up slowly and carefully during the next several years as it absorbs existing space service members and units from other services. Air Force Lt. Gen. David Thompson, who is assigned as the Space Force’s No. 2 general, told the House Appropriations Committee’s defense subpanel that space leaders were going to great lengths to avoid unnecessary buildup of the service, which is expected to grow to as many as 16,000 troops in the coming years.

“There’s been tremendous pressure and tremendous drive from our leadership to hold down the bureaucracy of this force,” he told the subcommittee during Wednesday’s first hearing focused on the Space Force, which was established in December. “We are going through a number of initiatives to ensure we are agile, we are lean and we are mission-focused.”

One of those initiatives is establishing how existing space troops from the other services will be incorporated into the Space Force. The Space Force intends to start with Air Force space operators, likely with the first batch moving into the new service in September, said Air Force Maj. Gen. Clinton Crosier, the director of Space Force planning.

While space operators will largely be expected to move into the Space Force, the service will seek volunteers to transition to the new branch for many of the other specialties, officials have said.

Crosier said he does not expect space operators now serving in the Army, Navy and Marine Corps to transfer into the Space Force until 2022.

For now, the Space Force remains a one-person military service. Gen. Jay Raymond, the chief of space operations, is the only official member of the service. The general is expected to be joined in the Space Force later this month by its first senior enlisted leader, Roger Towberman, who is an Air Force chief master sergeant and the senior enlisted leader for U.S. Space Command at Peterson Air Force Base in Colorado.

The Space Force generals in the two hearings Wednesday faced questions about the potential size of the service and about its plans for reserve components.

Lawmakers said they worried the service could balloon in size, comparing it to the establishment of the Director of National Intelligence’s office, which has grown from about 100 individuals in 2005 to more than 1,200.

Among the concerns raised by Rep. Peter Visclosky, D-Ind., was planning that would include two four-star generals and at least three three-star generals within the Space Force, which he said could make the small service “top heavy.”

Thompson said he understood the concern, but defended the planning because an equal military branch requires a certain level of brass to ensure its standing within the Pentagon.

Ultimately, Thompson and Raymond said, separately, the Space Force would build up as planned over the coming years and then adjust as dictated by its mission set.

But there are many questions that remain about the service, ranging from what its dress uniforms will look like to whether it will have a National Guard or Reserve element.

Thompson defended the Pentagon’s delay on making a decision about a Space reserves component, as a task force considers whether a Reserve is needed and how it could be built different from Guard and reserves components of the other services. National Guard officials, including top generals in charge of states with space units, have lobbied in recent weeks for the creation of a Space Guard.

Among several lawmakers to vocally support the immediate buildup of a Space National Guard, Rep. Steve Womack, R-Ark., said he was “skeptical” about an ongoing study of the issue.

“By not doing it now does it make it easier just to never do it?” he asked. “It just makes sense that the Space Guard idea should have been part and parcel of the process from the beginning, and it should have been incorporated.”

Thompson argued the study was necessary, telling Womack it would be even harder to “uncreate a [Space] Guard.”

“What we don’t want to do is put blinders on,” the general said. “We want to allow ourselves full flexibility.”