USS Ford heads out to sea amid tension between Navy, Congress over delays, costs 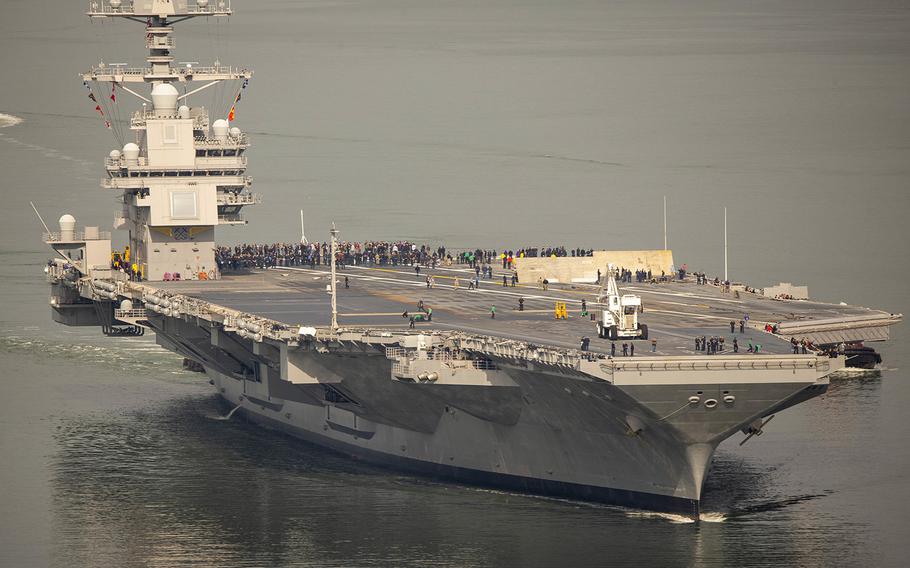 WASHINGTON — The USS Gerald R. Ford headed out to sea Friday after completing 15 months of maintenance and upgrades and two days after Rep. Elaine Luria and Navy Secretary Richard Spencer sparred over ongoing delays to the service’s newest aircraft carrier.

The Navy said Friday that $13 billion Ford departed from Newport News Shipbuilding in Virginia for further at-sea testing in the Atlantic Ocean.

For years, the Ford has faced setbacks, delays and cost overruns largely related to new its technology. The ship’s 11 weapons elevators, which are needed to load ordnance on planes, have been an ongoing problem. The Navy commissioned the ship in July 2017 without any working elevators. The ship’s electromagnetic catapult system for launching aircraft has also faced issues.

The Ford’s sea trials come amid tensions about the ship between Congress and the Navy.

On Wednesday, Spencer took issue with criticism from Luria, D-Va., who called the ship “a nuclear-powered floating berthing barge” during a House Armed Services Committee subpanel on readiness hearing. Luria raised concerns about the Ford’s costs and delays, including the ship’s troubled elevators.

“I look at her and other leadership on [Capitol] Hill who continually disparaged the Ford as a program, and I get a little upset,” Spencer said during a discussion at the Brookings Institution, a Washington, D.C., think tank. “You could not ask for a better disinformation program for our competitors. And I truly mean that.”

Luria responded, saying it is her role to question Navy leadership about the ship.

“I find it disappointing that the secretary finds congressional oversight disparaging,” she said in the prepared statement. “I have yet to see a detailed plan to fix the multitude of problems with these new technologies. The Navy accepted the design of these systems and accepted the ship in an incomplete state.”

“The Navy has diligently tackled issues associated with this first-in-class ship and will continue to do so,” Spencer said in a prepared statement. “All are eager to demonstrate Ford’s capacity to deliver combat power.”

At sea, the ship’s crew and engineers will test and validate several of the ship’s systems and equipment that had been part of the 15-month repairs. As of Friday, four of the 11 weapons elevators are operational.

Once the sea trials are completed, the Ford will return to Naval Station Norfolk in Virginia and “enter a post-delivery test and trials period to certify fuel systems, conduct aircraft compatibility testing, certify the flight deck, and test the combat systems installed aboard the ship,” according to the Navy.