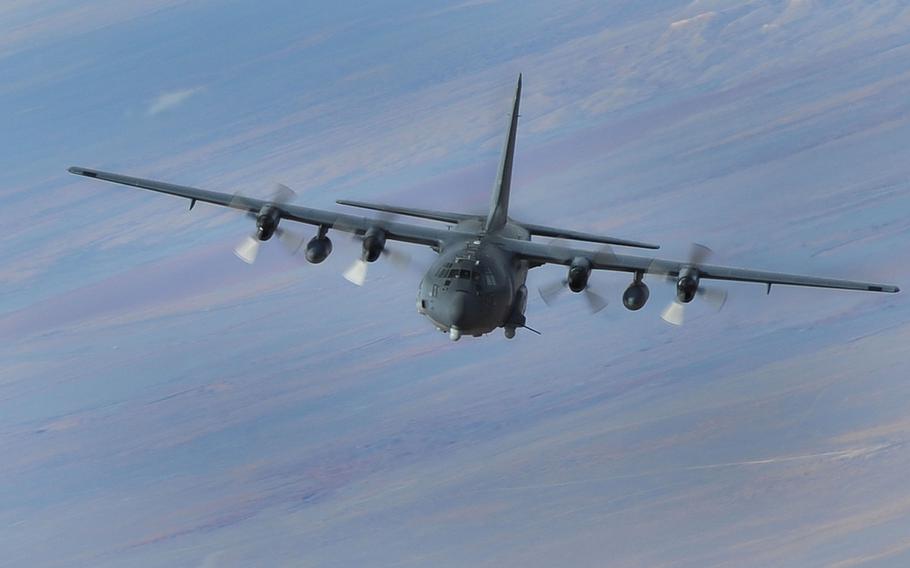 An AC-130W Stinger II gunship as shown on the Air Force's website. The same type of special operations aircraft joined the Navy in maritime operations in the Persian Gulf for the first time recently. (U.S. Air Force)

A special operations gunship directly supported maritime operations in the Persian Gulf for the first time during a joint exercise with Navy ships and a patrol aircraft last week, the U.S. military said.

The live-fire exercise came days before coalition deaths in Iraq renewed concerns about Iranian threats in the region.

The AC-130 Stinger II from Special Operations Command Central operated with Cyclone-class coastal patrol ships and P-8A Poseidon aircraft from the Navy’s 5th Fleet in a bid to improve U.S. capabilities to respond to surface threats.

Incorporating the gunship “significantly enhances our ability to detect, track, engage and defeat surface threats in order to control water space in the Arabian Gulf,” said Capt. Peter Mirisola, commander of Destroyer Squadron 50 and Combined Task Force 55 based out of Manama, Bahrain.

The AC-130W is outfitted with 30 mm, 105 mm and precision-guided munitions to provide close air support to troops on the ground and carry out air interdiction missions.

While the exercise on March 8 and 9 marked the first time that particular airframe has been integrated into maritime operations in the Persian Gulf, Navy officials cited joint operations during the “Tanker War” of the late 1980s as a precursor.

Special operations MH-6M Little Bird helicopters were similarly incorporated into Operation Earnest Will from 1987 to 1988, when U.S. Navy ships escorted Kuwaiti tankers to protect them from Iranian attacks during the Iran-Iraq War, the statement said.

A series of attacks on tankers in the Persian Gulf last summer raised concerns of a renewed tanker war, as the Trump administration imposed sanctions on Iran after withdrawing from the nuclear deal negotiated under the Obama administration and Iran threatened to block the Strait of Hormuz.

The waterway, a thoroughfare for much of the world’s oil, is one of three strategic choke points in the 5th Fleet’s 2.5-million-square-mile area of operations, which also includes the Arabian Sea, Gulf of Oman, Red Sea and parts of the Indian Ocean.

Since last summer, the U.S. and its allies have stepped up maritime patrols, and the Pentagon has deployed more troops, aircraft and air defense capabilities to the region. The U.S. has also accused Tehran or its proxies of attacking Saudi Arabian oil facilities, smuggling arms to Houthi rebels in Yemen and striking Iraqi installations housing U.S. and coalition forces.

The latest fatal rocket strike in Iraq last week killed two American troops and a British soldier at Camp Taji, north of Baghdad, leading the U.S. to respond with airstrikes on the Iran-backed Kataeb Hezbollah militia.

The exchange of fire was similar to a series of attacks in January that culminated with an Iranian ballistic missile strike on a U.S.-occupied base in western Iraq.

“U.S. Central Command is well-postured to defend our forces around the region, and respond to any further aggression against our forces,” he said. “We have the flexibility, the capability, and the will to respond to any threat.”