The stateroom of the USS Fitzgerald's stateroom as seen from the exterior of the ship after its collision on June 21, 2017. (U.S. Navy)

The stateroom of the USS Fitzgerald's stateroom as seen from the exterior of the ship after its collision on June 21, 2017. (U.S. Navy) 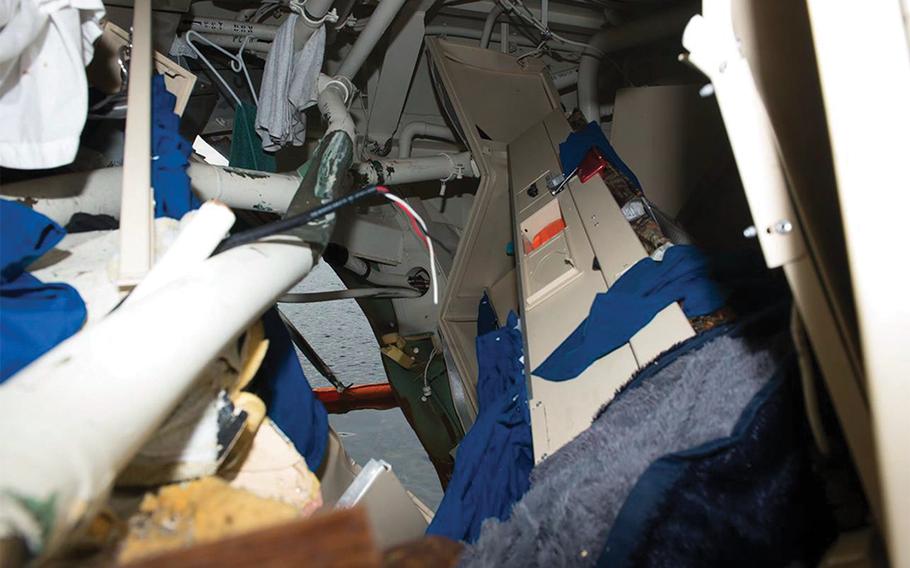 Internal view through Berthing 3 of the USS John S. McCain as seen after its collision with the merchant vessel Alnic MC while underway east of the Straits of Malacca and Singapore on Aug. 21, 2017. (U.S. Navy) 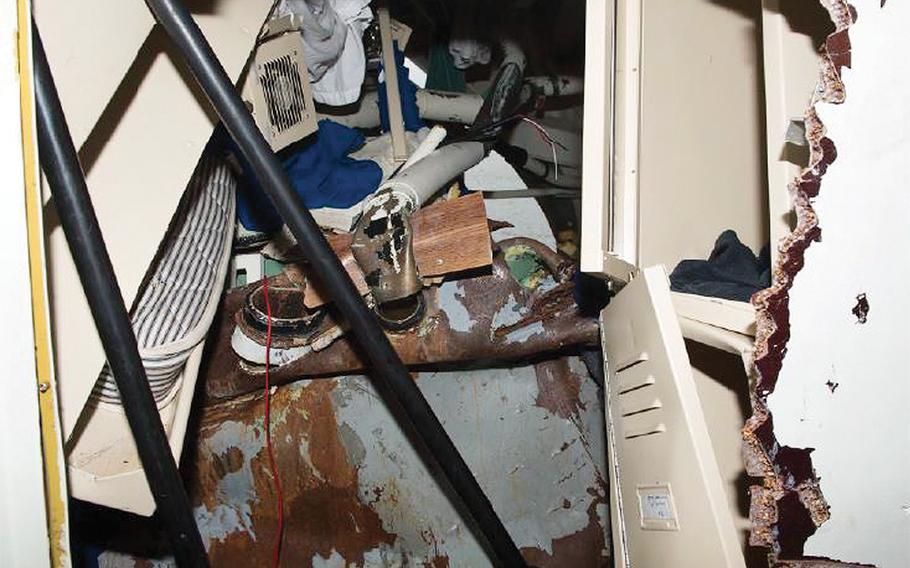 The view through a hole cut into the bulkhead of the USS John S. McCain as seen after its collision with the merchant vessel Alnic MC while underway east of the Straits of Malacca and Singapore on Aug. 21, 2017. (U.S. Navy) 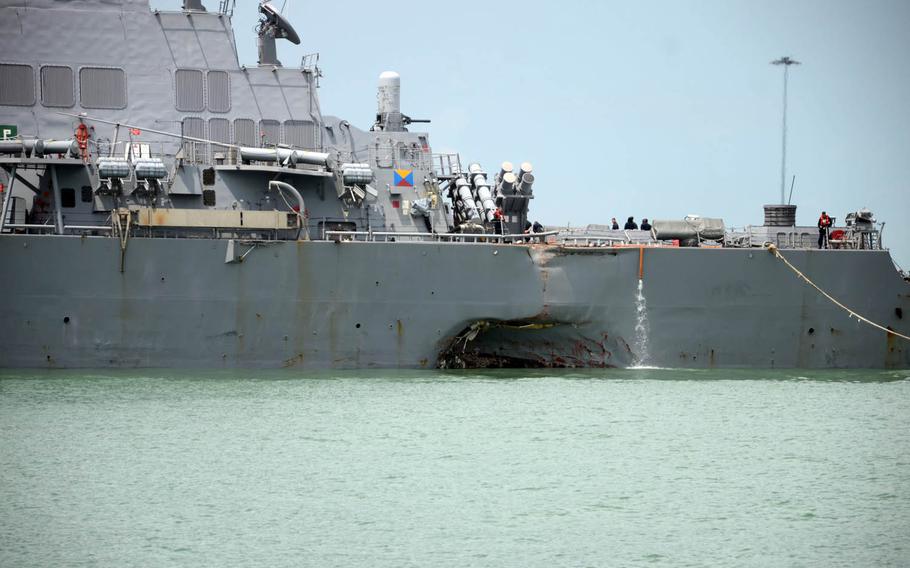 Tugboats assist the guided-missile destroyer USS John S. McCain as it steers toward Changi Naval Base, Singapore, following a collision with the merchant vessel Alnic MC while underway east of the Straits of Malacca and Singapore on Aug. 21, 2017. (Madailein Abbott/U.S. Navy photo)

The two collisions that killed a combined 17 sailors aboard the destroyers USS Fitzgerald and USS John S. McCain resulted from sailors not following procedures and lack of communication between officers and the rest of the ship, a Navy report released Wednesday concluded.

Watch-standers aboard USS Fitzgerald were not paying attention to the right-hand side of the ship prior to its collision with the tanker ACX Crystal on June 17 in waters near Tokyo Bay in Japan, according to the 71-page investigation report on both collisions.

Meanwhile, sailors in Fitzgerald’s combat information center — charged with providing the most complete picture of traffic in the area — weren’t watching considerable ship activity in the area.

Additionally, Fitzgerald’s officer of the deck failed to contact the tanker, take evasive action or warn the commanding officer and crew of the hazardous situation, according to the report.

On the John S. McCain, confusion led to five steering configuration changes in roughly three minutes before the ship collided with the tanker Alnic MC in the Straits of Singapore on Aug. 21, according to the report.

The collisions have led the Navy to review its training, manning and operational guidelines throughout the fleet. Congressional testimony revealed what many in the Navy and the Japan-based 7th Fleet for years had come to accept: some deployed sailors were working up to 100-hour weeks aboard ships that often weren’t properly manned.

Meanwhile, necessary training gave way to operational demands amid tensions with North Korea, China and others in the Asia-Pacific region.

“Numerous failures occurred on the part of leadership and watchstanders” aboard the Fitzgerald before its early-morning collision, according to the report. They included failures to plan for safety, navigate, execute basic watch standing practices and respond appropriately during a crisis.

At 1 a.m. on June 17, Fitzgerald approached three merchant vessels from its right side within a traffic separation scheme, which is a common setup throughout the world for ships approaching busy channels. According to international rules taught to navies and pleasure craft alike, Fitzgerald was in a crossing situation, which obligated the ship to remain clear of the others. If it did not, Crystal should have taken “early and appropriate action,” according to the Navy’s account.

“In the 30 minutes leading up to the collision, neither Fitzgerald nor Crystal took such action to reduce the risk of collision until approximately one minute prior to the collision,” the report stated.

Fitzgerald commanding officer Cmdr. Bryce Benson was asleep at the time, leaving control to the officer of the deck. That officer failed to sound a danger signal or notify Benson of a hazardous situation, both of which are standard Navy procedure. The officer also did not attempt to contact the Crystal on bridge-to-bridge radio prior to the collision.

Meanwhile, teams responsible for watching the immediate area on and below decks failed to notify the officer on deck of the danger, the report stated.

The resulting errors led Crystal to strike Fitzgerald on the right side, just forward of the middle of the ship. The bow struck an entry space that opens in to a crew berthing through a non-watertight door. Water quickly flooded one berthing and then flowed into a second berthing.

Meanwhile, the impact knocked Benson out of his berthing entirely.

“The rescue team tied themselves together with a belt in order to create a makeshift harness as they retrieved [Benson], who was hanging from the side of the ship,” the report stated.

Benson was airlifted to U.S. Naval Hospital Yokosuka for treatment and later released. Benson, who had been in command for about one month prior to being the ship’s executive officer, was relieved of duty during the accident investigation.

McCain’s ‘loss’ of steeringUnlike aboard the Fitzgerald, McCain skipper Cmdr. Alfredo Sanchez had been on the bridge for about four hours when his ship collided with the Alnic at 5:24 a.m. in August.

Sanchez and his executive offer were relieved of duty last month for their roles in the collision, The Navy concluded that the accident was due largely to lack of awareness and training.

“Watchstanders operating the John S. McCain’s steering and propulsion systems had insufficient proficiency and knowledge of the systems,” the report stated.

McCain entered a high-traffic area of the Singapore Strait at 5:20 a.m., 40 minutes before the ship’s Sea and Anchor detail was scheduled to begin.

The detail means more sailors on duty, including those tasked with navigation and ship handling. The ship’s executive officer, navigator and operations officer had recommended the detail begin earlier, but were overruled by Sanchez, who wanted to give his crew a little more rest.

Meanwhile, McCain was operating as a “darkened ship,” with only its navigation lights on before sunrise, in accordance with Navy policy that some have questioned since the collision.

Prior to the accident, Sanchez noticed a junior sailor at the helm having trouble. He let that sailor keep control of the rudder while ordering speed control transferred to a sailor sitting next to the helmsman.

Instead, both functions were transferred, leaving the helmsman to believe the ship had completely lost steering control.

With no one steering or aware that they could do so, the ship veered off course. Sanchez ordered speed reduced to about 6 mph, but the sailor reduced speed only on the left-side shaft, leaving the ship to continue at 23 mph.

The crew regained control just before McCain crossed in front of Alnic’s bow and collided.

Neither ship sounded the five, short whistle blasts required to signal danger, nor did they attempt to contact each other, the report stated.

All 10 sailors who died were in Berthing 5, a 15-foot-wide space compressed by the impact to only five feet wide.

“Based on the size of the hole, and the fact that Berthing 5 is below the waterline, the space likely fully flooded in less than a minute after the collision,” the report stated.