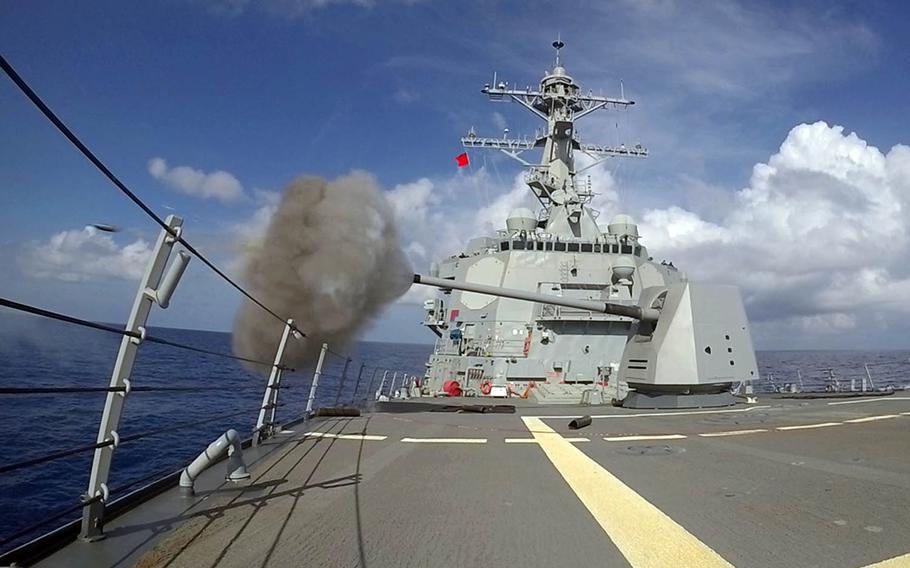 The guided-missile destroyers USS Spruance and USS Preble passed “within 12 nautical miles” of the Spratly Islands while conducting “freedom of navigation operations (FONOPS),” U.S. Pacific Fleet said in a statement.

The operations came as the U.S. and China were set to begin trade negotiations Tuesday in Beijing.

The FONOPS were conducted “in order to challenge excessive maritime claims and preserve access to the waterways as governed by international law,” the statement said.

The South China Sea is a major shipping route, with an estimated $3 trillion worth of goods passing over the waters each year.

“All operations are designed in accordance with international law and demonstrate that the United States will fly, sail and operate wherever international law allows,” the Navy said. “That is true in the South China Sea as in other places around the globe.”

The Navy did not specifically identify what features the destroyers sailed past, but Reuters reported the ships had steamed near Mischief Reef, which is the largest artificial island created by China in the archipelago.

Before China built the island by dredging sand from the sea floor, Mischief Reef was a feature completely underwater and thus regarded by international law as part of the continental shelf of the nearby Philippines.

The U.S. has not taken sides in these sovereignty disputes but has been unwavering in its assertions that international maritime law allows ships to sail near these sites.

Chinese Foreign Ministry spokeswoman Hua Chunying told reporters Monday in Beijing that China’s navy had “warned off” the Spruance and Preble, according to a Bloomberg report.

“We firmly oppose any action to jeopardize the sovereignty and security of countries under the pretext of freedom of navigation,” she said.

Asked by a reporter whether the latest FONOP would affect trade talks, Hua offered an oblique assessment about “a series of tricks by the U.S. side.”

“I believe you all see through these small tricks by the U.S. side,” she said.