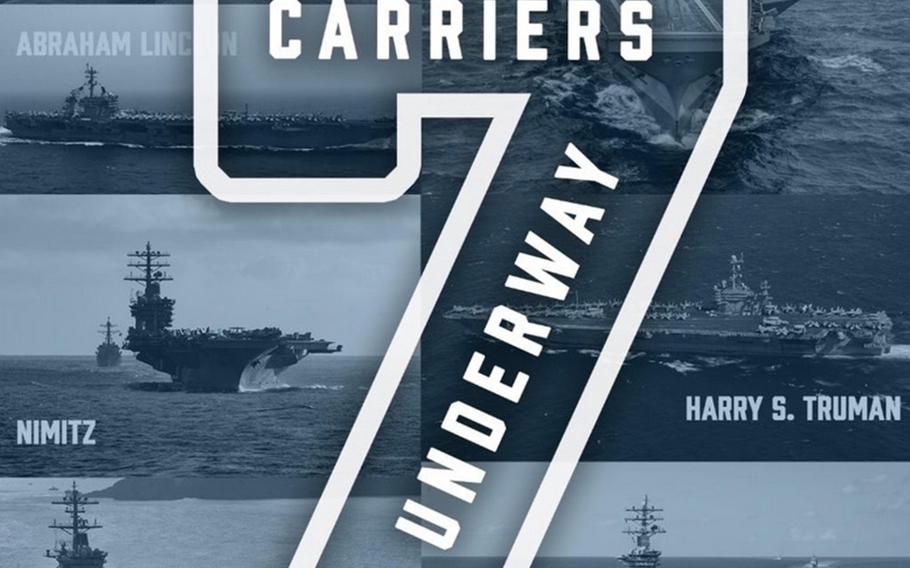 The Navy trumpeted on social media Friday, May 22, 2020, that seven of its 11 aircraft carriers are now underway. (U.S. Navy)

The Navy on Friday touted the fact that seven of its 11 aircraft carriers are now underway after coronavirus and maintenance issues had beset the fleet in recent months.

“Around the world, we are underway and ready,” the service said in a Facebook post featuring a graphic with a large “7” plastered over the photos of carriers Ronald Reagan, Gerald R. Ford, Abraham Lincoln, Nimitz, Harry S. Truman, Theodore Roosevelt and Dwight D. Eisenhower.

Aircraft carriers are perhaps America’s most visible manifestation of global military might, each operating with its own strike group and able to project power into hotspots.

The USS Theodore Roosevelt was sidelined for almost two months in Guam dealing with a coronavirus outbreak that infected more than 1,100 sailors and killing one. It finally set sail Thursday but only with essential crew members aboard.

Two other carriers got underway earlier this month.

The Ronald Reagan headed to sea after six months of routine maintenance at its homeport in Yokosuka Naval Base near Tokyo. Seeking to avoid the type of widespread contagion experienced by the crew of the Roosevelt, the Navy placed Reagan sailors into phased sequestrations of up to 21 days as they transferred to the carrier.

The Abraham Lincoln departed its homeport of San Diego May 7, less than four months after completing a record-breaking 295 days at sea during its previous deployment. Nimitz got underway from San Diego a day later.

With an eye toward China, the Navy has stepped up publicity over its operations in the South China Sea in the wake of the coronavirus crisis.

China took advantage of the diminished presence of U.S. Navy carriers in the Pacific by twice in April sailing its own carrier, the Liaoning, between two islands of Japan’s Okinawa prefecture.

During its second pass through on April 28, the Liaoning was accompanied by two guided-missile destroyers, two multirole warships and a combat-support supply ship.

China also appeared to step up its operations in the South China Sea by carrying out surveys within the waters of Malaysia’s exclusive economic zone.

In early April, a Vietnamese fishing boat sank during a skirmish with a Chinese coast guard ship in a disputed area. Vietnam officials claim that the Chinese boat intentionally rammed the fishing boat, while China says the fishermen were to blame for the sinking.

The Navy has been challenged to keep carriers at sea in recent years.

An analysis published by USNI News in September 2018 concluded that during the previous 15 months the Navy had the lowest number of carrier strike groups underway in 25 years.

In December, the Navy announced that seven carriers were finally underway after half the carrier fleet had spent the fall in a non-deployable state, but three months later the virus waylaid the Theodore Roosevelt.

Among the carriers that had been sidelined last year, the USS George Washington was in the shipyard for an overhaul, while the USS John C. Stennis was awaiting one. The USS George H.W. Bush and USS Carl Vinson were undergoing maintenance, while the Harry S. Truman had to delay departure to sea because of an electrical malfunction.