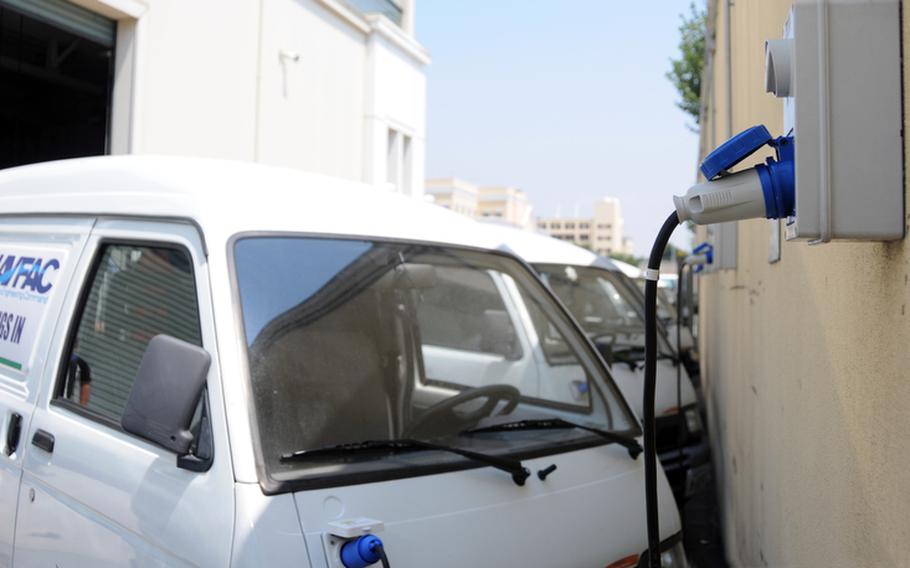 Some of the Micro-Vett Edyone electric vehicles assigned to Naval Support Activity Naples, Italy, are plugged in to charge outside of the public works department at the Capodichino Navy base. (Sandra Jontz/Stars and Stripes)

The Navy has announced a pilot program that will bring electric vehicle charging stations to Navy Exchanges in Maryland and California over the next two years.

The first store will be NEX Bethesda, Md., at 48 cents per kilowatt hour, a Navy statement said Tuesday. Stations will be added at NEX San Diego and NEX North Island this year and NEX Annapolis, Md., in 2014.

Pricing may differ but will be competitive with stations in the surrounding area, the release said. The locations were chosen due to a high concentration of electric vehicles.

"We are piloting this program to meet the needs of our customers who own electric vehicles," said Robert Bianchi, chief executive officer of the Navy Exchange Service Command. "Electric vehicle charging stations are a win for our customers, for the Navy and for the environment."

Customers will be able to pay with either radio frequency identification credit or a ChargePoint keycard, which acts like a debit card, the statement said.

Charging stations have been added at fewer than 50 installations for these government vehicles, officials have said. Officials are pondering other locations and how to fund them.

Off-base charging stations have also sprung up near installations in Hawaii and along the West Coast.