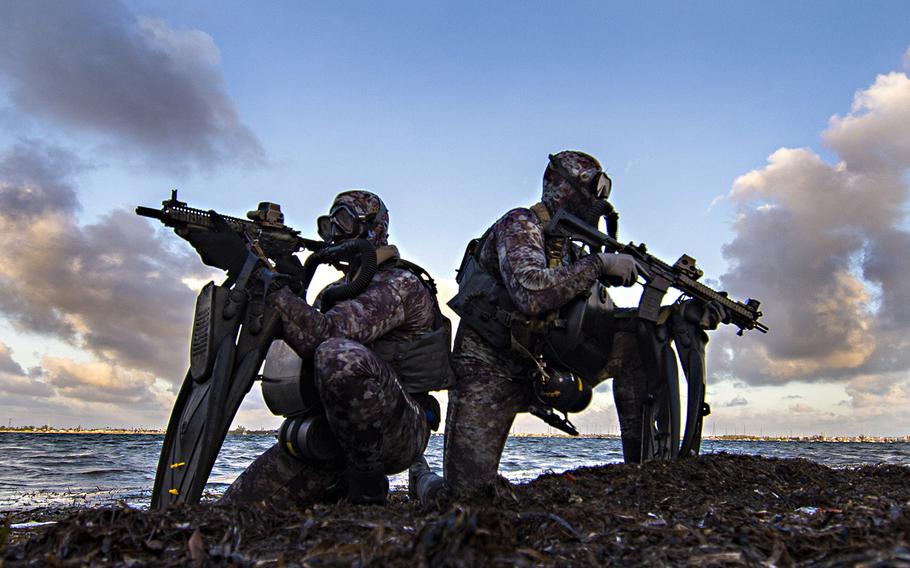 Members of Naval Special Warfare Group 2 conduct military dive operations of the East Coast of the United States. The elite group is under scrutiny because of problems in the ranks that have ranged in recent years from allegations of war crimes committed against detained enemies and civilians and drug use to complaints of sexual assault, child pornography and molestation. (Jayme Pastoric/U.S. Navy)

WASHINGTON — The Navy’s top SEAL wrote in a message to the Naval Special Warfare Command that he has ordered an ethics review of the elite force, telling them that “we have a problem” within the SEALs, which have been plagued by allegations of crimes and other misconduct.

“Some of our subordinate formations have failed to maintain good order and discipline and as a result and for good reason, our [Naval Special Warfare] culture is being questioned," Rear Adm. Collin Green, the commander of Naval Special Warfare Command, wrote in a letter to his force dated July 25. “I don’t know yet if we have a culture problem, I do know that we have a good order and discipline problem that must be addressed immediately.”

Green gave commanders throughout his force until Wednesday to report all outstanding problems within their units to him and provide recommendations on how to fix the issues within the ranks. He also ordered his entire command to read the first two chapters of former SEAL Dick Couch’s book, “A Tactical Ethic,” which addresses problems in the SEAL community during operations in Iraq and Afghanistan.

Problems in the SEALs ranks have ranged in recent years from allegations of war crimes committed against detained enemies and civilians and drug use to complaints of sexual assault, child pornography and molestation. One SEAL, Senior Chief Petty Officer Adam Matthews, a former member of the Naval Special Warfare Development Group, or SEAL Team 6, was convicted this year in the 2017 strangling death of Green Beret Staff Sgt. Logan Melgar in Mali. Another member of the SEALs, Senior Chief Petty Officer Tony DeDolph, faces charges, including murder, in that case.

Green cautioned that continued headline-grabbing problems within the SEALs could cause irreparable damage to the public’s image of the elite force as moral and disciplined warriors.

“The trust placed in Naval Special Warfare by our military and civilian leaders … and ultimately the American people must never be taken for granted,” the admiral wrote. “The responsibility for ethical and professional behavior must be taken seriously — by everyone, at every level of our organization.”

The letter came immediately following reports of a Navy SEAL team being suddenly sent home late last month to San Diego from Iraq over accusations of drinking alcohol during an Independence Day celebration, in which an alleged sexual assault on a female servicemember working with the team occurred.

An unnamed defense official with knowledge of the Iraq incident told the New York Times last month that the rest of the platoon refused to cooperate after the woman reported the crime. Rear Adm. Collin P. Green, shown delivering remarks in Washington on July 30, 2019, has called for an ethics review of the Special Warfare Command. “I don’t know yet if we have a culture problem, I do know that we have a good order and discipline problem that must be addressed immediately,” Geeen wrote in a message to the force. (Laura Lakeway/U.S. Navy)

This week, the Navy tossed out its case against Gallagher's platoon leader for holding the decorated SEAL's reenlistment ceremony next to the body of the dead ISIS teen.

Meanwhile, in Norfolk, Va., a former petty officer was sentenced to 60 years in prison for repeatedly molesting his young daughter while he was serving on SEAL Team 1 in San Diego. Former Petty Officer 1st Class Gregory Kyle Seerden had previously pleaded guilty to the charges and was already serving 27 years for creating child pornography.

The misconduct cases have raised questions about the root of the discipline problems within the SEAL teams and the larger special operations community. In December, prompted by such cases, then-commander of U.S. Special Operations Command, Gen. Tony Thomas, ordered a 90-day internal review within the command.

In a memorandum sent to the Special Operations Command, Thomas warned of "an eroded values system," which he said threatened to erode trust between SOCOM troops, senior military leaders and the American people.

Green's memo called on Navy special operations leaders to take a "proactive approach" to prevent further breaches, rather than trying to manage the consequences of ethics and behavioral violations.

The next chief of naval operations, Vice Adm. Michael Gilday, was confronted this week by members of the Senate Armed Services Committee about the “troubling trend” within the Naval Special Warfare Command.

Gilday, who was confirmed by the Senate on Thursday to become the Navy’s top officer later in the summer, said he was eager to determine the root causes of the issues.

“I commit to getting a better understanding of those issues, to holding people accountable if and where they need to be held accountable,” he said. “[And] to getting after the root causes and ensure if there is a problem with culture of the community that that is addressed very quickly and very firmly.”