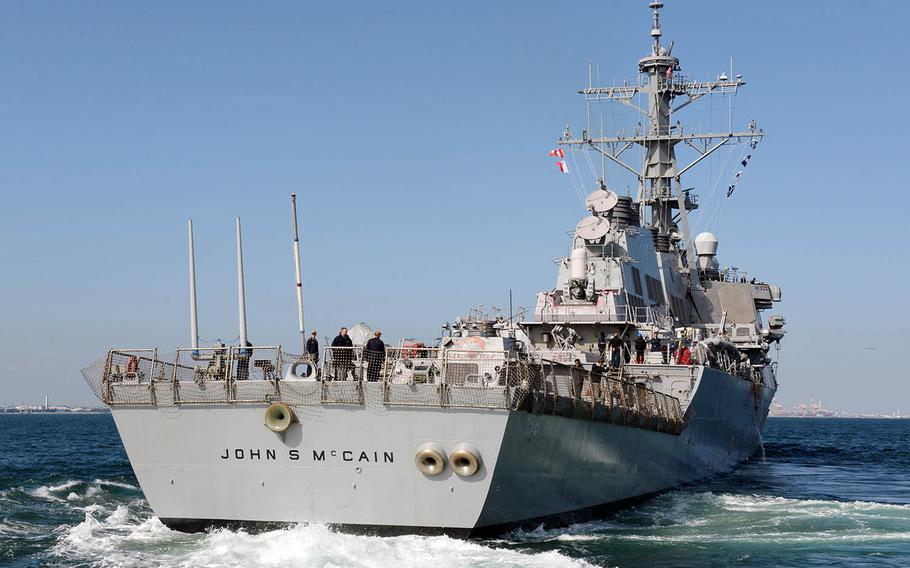 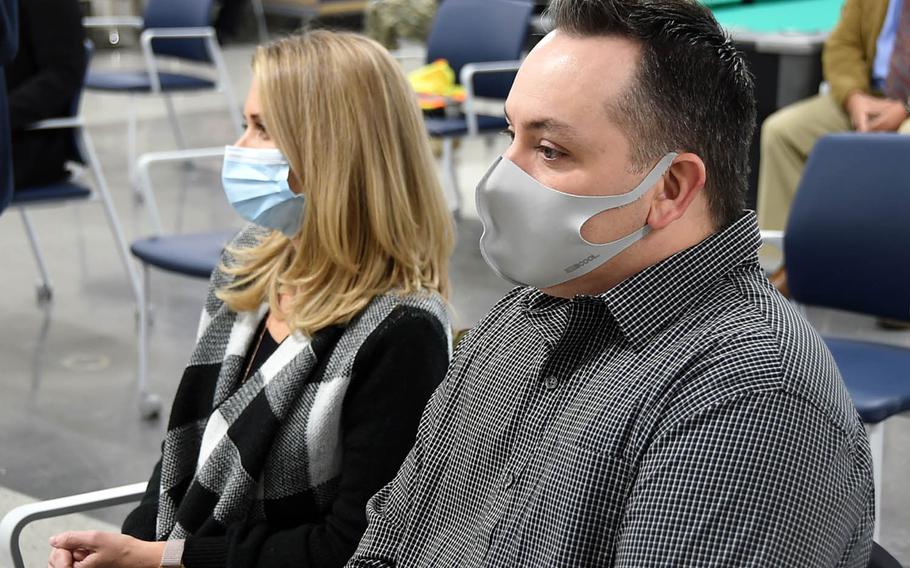 Amy and Jonathan Winters, the sister and brother-in-law of Chief Petty Officer Charles Findley, attend a ceremony naming a new barracks building after the USS John S. McCain at Naval Station Great Lakes, Ill., Oct. 27, 2020. Findley was among 10 sailors killed when the McCain collided with a commercial vessel near Singapore in 2017. (Nick Scott/U.S. Navy)

The Navy has named the newest barracks at Naval Station Great Lakes after one of two guided-missile destroyers involved in fatal collisions in 2017.

The USS John S. McCain barracks opened Tuesday and will house junior sailors learning at technical schools at the base near Chicago, according to a Navy statement Tuesday. All barracks at Great Lakes are named after warships. Others include the USS Reuben James, USS Mason and USS Farragut.

“By treating each barracks as a ship, recruits and students learn the fundamentals of watch-standing,” the statement said. “The students who occupy the new barracks will, on average, be around the same age as those who served aboard the ship McCain” and died in the collision.

All the fallen sailors started their Navy careers in boot camp at Great Lakes, and eight of them received their follow-on training there afterward, said Great Lakes’ commander, Capt. Raymond Leung, according to a recording of the ceremony.

Ten McCain sailors died, and several were injured on Aug. 21, 2017, when the ship collided with a Liberian-flagged tanker, the Alnic MC, in the Strait of Malacca near Singapore. The impact crumpled a berthing area and caused heavy flooding.

Confusion among watch standers had led to a loss of steering control, and the destroyer crossed into the tanker’s path, according to post-collision reports. The ship underwent more than two years of repairs before returning to sea in June.

The barracks designation honors the McCain sailors who died, as well as the three men for whom the destroyer is named: the late senator from Arizona, and his father and grandfather, both Navy admirals.

Some of the fallen sailors’ family members attended the barracks’ ribbon-cutting ceremony on Tuesday.

Theresa Palmer said her son, Petty Officer 2nd Class Logan Palmer, an interior communications electrician, had been on the ship less than three months before he died in the collision, according to the statement. After the accident, she joined a Navy and Marine Corps prayer group where she encourages service members’ parents and spouses “to continue to pray for their sailors.”

“It’s been a long haul,” she said, according to the Navy.

Leung said he hoped “students are inspired by the crew’s seamanship and heroism, and use the lessons learned from the incident as motivation to study hard, be ready to save a ship at a moment’s notice and be ready for duty in the Fleet,” according to the statement.

“Promoting professional development and quality of life are the two goals driving the opening of these barracks,” Leung said in the statement. “It was brave men and women — United States Navy Sailors — who saved the ship.”

The McCain collision was the second involving a 7th Fleet warship that year. Seven sailors died aboard the USS Fitzgerald on June 17, 2017, when it collided with a Philippine-flagged container ship, ACX Crystal, about 80 miles southwest of Tokyo.

Reports on the collisions’ causes led to service-wide changes, including to training, watch-standing and certification processes.