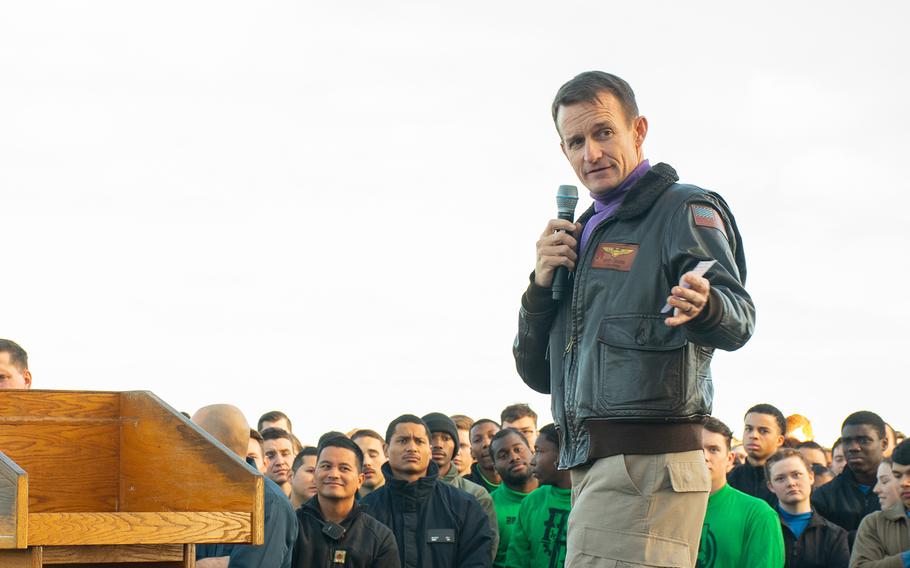 Capt. Brett Crozier, then-commanding officer of the aircraft carrier USS Theodore Roosevelt (CVN 71), speaks to the crew on the ship's flight deck on Dec. 15, 2019, while operating in the Pacific Ocean. Navy leaders on Friday, April 24, 2020, recommended that Crozier be reinstated following their investigation into his letter warning of a severe coronavirus outbreak on the carrier. (Alexander Williams/U.S. Navy)

WASHINGTON — Navy leaders have recommended Capt. Brett Crozier, the former commander of the USS Theodore Roosevelt, be reinstated following their investigation into his letter warning of a severe coronavirus outbreak among his crew, according to a news report.

The Navy initiated an investigation into the outbreak aboard the Roosevelt and the conduct of Crozier after the nuclear-powered aircraft carrier arrived in Guam on March 27 as the virus spread among the ship’s crew of more than 4,800 sailors.

Defense Secretary Mark Esper was briefed on the Navy’s recommendations Friday afternoon, according to Jonathan Hoffman, the chief spokesman for the Pentagon.

“Secretary Esper received a verbal update from the acting Secretary of the Navy [James McPherson] and the Chief of Naval Operations [Adm. Michael Gilday] on the Navy’s preliminary inquiry into the [coronavirus] outbreak on the USS Theodore Roosevelt,” Hoffman said later in a statement. “After the secretary receives a written copy of the completed inquiry, he intends to thoroughly review the report and will meet again with Navy leadership to discuss next steps.”

The Navy’s investigation concerns more than Crozier and it examined communications between naval officers as well as the service’s response efforts spanning multiple time zones and commands, said a senior defense official, who spoke on the condition of anonymity because the official was not authorized to speak about the matter.

Esper wants to read the full report to make certain it is “thorough and can stand up under the rightful scrutiny of Congress, the media, the families and crew of the Theodore Roosevelt, and the American people,” the official said.

The New York Times reported the briefing from McPherson and Gilday called for Crozier to be reinstated as commander of the Roosevelt. However, Esper requested more time to consider whether to approve the captain regaining command of the carrier, according to The Times.

Crozier was relieved of his command April 2 after a letter he wrote requesting that the crew be evacuated from the ship was leaked to the media.

Crozier, who also contracted the coronavirus, warned in his letter that the outbreak could kill some sailors, and “if we do not act now, we are failing to properly take care of our most trusted asset — our sailors.”

A top lawmaker on defense issues called for Crozier’s immediate reinstatement at the helm of the Roosevelt.

Rep. Adam Smith, D-Wash., the chairman of the House Armed Services Committee, said Friday that former acting Navy Secretary Thomas Modly’s decision to remove the aircraft carrier’s commander was “completely wrong,” likening it to the former Navy leader’s decision to fly to Guam and deliver his ill-advised address that ultimately cost him his job.

“While Captain Crozier’s actions at the outset of the health crisis aboard the TR were drastic and imperfect, it is clear he only took such steps to protect his crew,” Smith said in a statement. “Not only did Captain Crozier have the full support of his crew, he also attempted to work within his chain of command. During this time of crisis, Captain Crozier is exactly what our sailors need: a leader who inspires confidence.”

When Modly announced he had fired Crozier during a Pentagon news conference, he said the dismissal was due to loss of confidence and for not using his chain of command to make Navy leaders aware of his concerns about the coronavirus outbreak on the ship.

The night that Crozier officially left the Roosevelt, a massive crowd of sailors cheering for the captain as he made his way ashore, according to videos later posted online of his departure.

Just days after firing Crozier, Modly flew to Guam to speak to the crew of the Roosevelt. His disparaging remarks about the former commander were leaked online.

In a recording of Modly’s speech, the former Navy secretary is heard saying if the captain did not believe his letter requesting help for the virus outbreak would be leaked to the media after sending it to more than 20 people, then he was “too naïve or too stupid to be the commanding officer of a ship like this.”

After mounting scrutiny about his remarks and an apology, Modly resigned and acting Army Undersecretary James McPherson was appointed as the acting Navy secretary.

While the Navy grapples with the continued fallout from the outbreak among the Roosevelt crew, the service reported Friday its second coronavirus outbreak on a deployed warship, announcing 18 sailors had tested positive for the virus aboard the destroyer USS Kidd. The disclosure came after a sailor developed symptoms on the ship Thursday and tested positive after being evacuated to a medical facility in San Antonio.

The ship was supporting counter-drug operations in waters under U.S. Southern Command’s responsibility and the Navy has diverted it to an undisclosed port. There, as the service did with the Roosevelt’s crew, the Navy plans to remove most of its about 330 crew members, test them for the virus and isolate them for at least two weeks, officials said Friday.