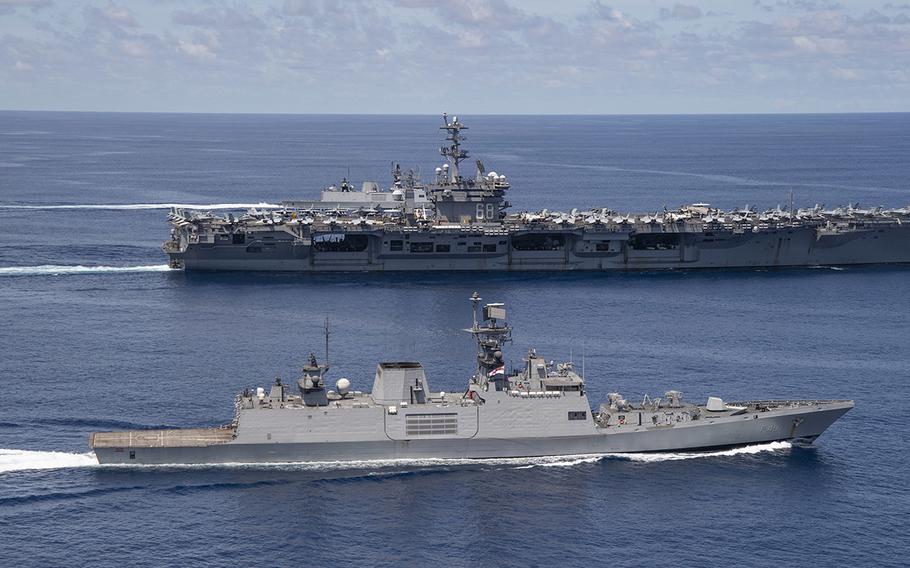 The aircraft carrier USS Nimitz steams beside a ship from the Indian navy in the Indian Ocean on Monday, July 20, 2020. (Donald White/U.S. Navy)

Navy ships continued their search on Monday morning for a sailor who was reported missing in the North Arabian Sea on Sunday.

The aircraft carrier USS Nimitz and the guided-missile cruiser USS Princeton were both conducting search-and-rescue operations, the 5th Fleet said in a brief statement. A “man overboard” alert was sounded at 6:47 p.m. on Sunday after the crew searched extensively and was unable to find the sailor aboard the Nimitz, a spokeswoman for the U.S. Navy's Bahrain-based 5th Fleet told the Associated Press.

The missing sailor was listed as duty status whereabouts unknown, or DUSTWUN, onboard the carrier, the Bahrain-based command said.

The sailor’s name was withheld, the command said, citing policy.