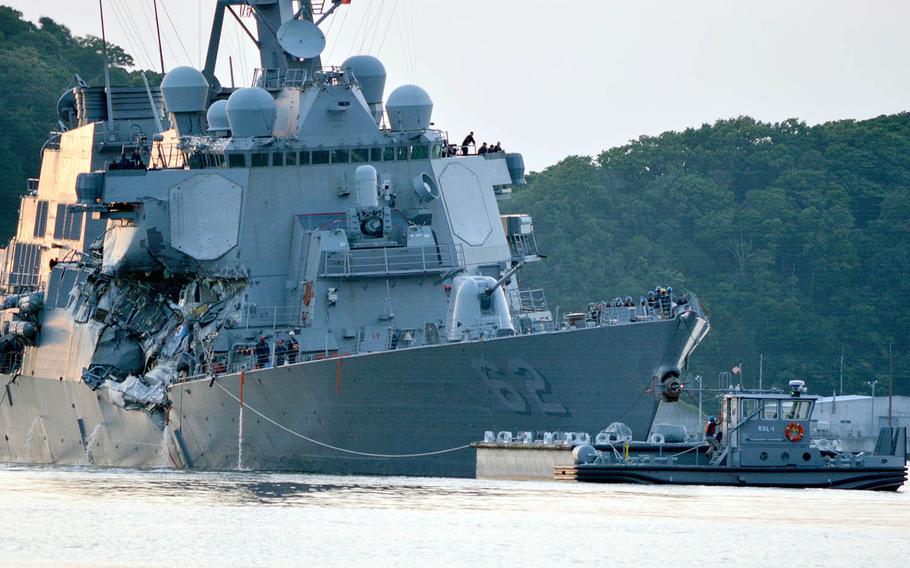 The guided-missile destroyer USS Fitzgerald returns to Yokosuka Naval Base, Japan, following a collision with a merchant vessel on June 17, 2017. (Peter Burghart/U.S. Navy)

YOKOSUKA NAVAL BASE, Japan — More than three years after the USS Fitzgerald collision that killed seven sailors, the U.S. federal agency investigating the cause has released its findings, which echo the Navy’s conclusions from months after the 2017 accident.

The report said “[the] Fitzgerald’s bridge team’s failure to take early and substantial action to avoid collision as the give-way vessel in a crossing situation” was the probable cause of the collision.

The Navy censured the Fitzgerald’s then-commander and a tactical action officer after the accident. Neither were punished and both were allowed to retire.

The Fitzgerald was about 60 nautical miles southwest of Yokosuka, where it was homeported, when the collision happened. As the vessel approached the ACX Crystal, neither radioed the other, according to the NTSB report.

By the time watch officers identified the danger and tried to turn the ship to avoid collision, it was too late, according to the report. Seven sailors died, three were seriously injured and the Fitzgerald sustained $300 million worth of damage.

Contributing factors included “ineffective communication and cooperation among the Fitzgerald crew on the bridge and in the combat information center, and the Fitzgerald commanding officer’s insufficient planning for the hazards of the vessel’s intended transit,” according to the report.

The findings mirror those of the Navy’s 2017 post-collision report that called the accident preventable. That report identified the bridge team’s failure to “plan for safety,” “adhere to sound navigation practices,” “properly use available navigation tools” and “respond deliberately and effectively” as contributing factors in the collision.

Though the NTSB report identified the Navy failings as the probable cause of the collision, the agency “does not assign fault or blame for an accident or incident.”

The report also noted the ACX Crystal’s failure to detect the Fitzgerald early and “insufficient actions to avoid collision.”

“Assignment of fault or legal liability is not relevant to the NTSB’s statutory mission to improve transportation safety by investigating accidents and incidents and issuing safety recommendations,” the board said in its report.

The transportation board’s findings are also similar to those in a Japan Transport Safety Board report released last year. The Japanese government ordered that investigation, which also did not assign blame, because the incident took place in Japanese waters.

The U.S. transportation board’s report recommended revising “fleetwide training and qualification requirements for officers of the deck” and improving communication between the bridge and combat information center teams.

Previously, the Navy said it has already made such revisions and has implemented 107 of 111 recommendations in its own post-collision report, including tightened surface warfare officer qualifications, improved training and certification standards and changed sleep schedule policy to better complement circadian rhythm. The remaining four recommendations are expected to be implemented by the end of December.

The Fitzgerald returned to sea in February, after about 2½ years of repair work.

The Fitzgerald crash was the first of two deadly collisions that the Navy suffered in 2017. The USS McCain collided with another civilian ship in August, claiming the lives of 10 sailors. The McCain returned to sea in October 2019.