For first time, the Navy has recommended a woman to command an aircraft carrier 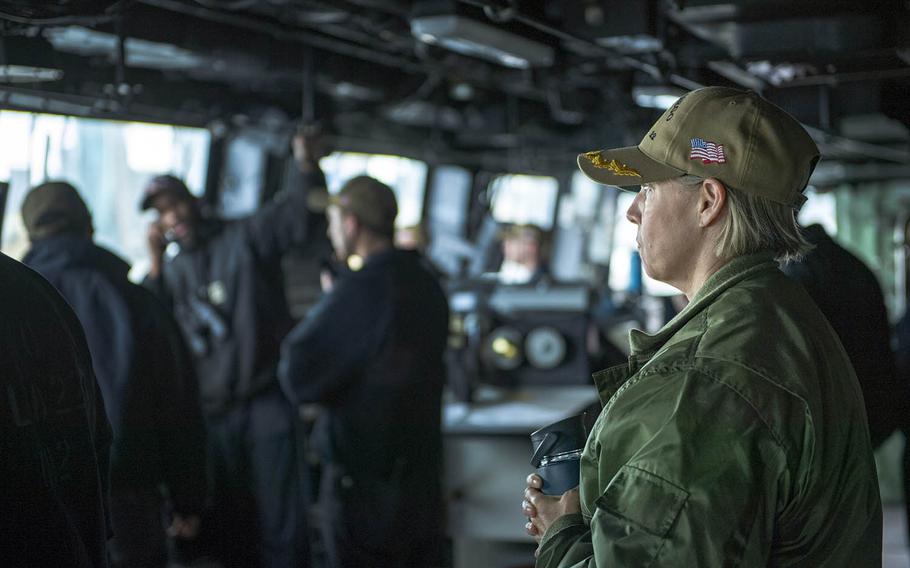 The Navy for the first time has recommended a woman for command of a U.S. aircraft carrier, Naval Air Forces spokesman Cmdr. Zachary Harrell said Wednesday.

Capt. Amy Bauernschmidt, a former Navy helicopter pilot and commander of an amphibious transport dock, is one of six Navy captains recommended for carrier command by the Aviation Major Command Board on Nov. 21. The others are Colin Day, Gavin Duff, Brent Gaut, David Pollard and Craig Sicola.

The Navy has not yet assigned Bauernschmidt or her colleagues to a carrier, Harrell said. They will be eligible for command in fiscal year 2022.

The board was directed to consider officers' “breadth of experience to include major staff and joint duty assignments” in selecting those they wished to recommend, according to the Nov. 9 Navy order convening the screening board.

The Navy has 11 aircraft carriers, all nuclear powered and the largest warships afloat, according to Navy.mil. Including their air wings, each carries a crew of about 5,000 and 60-75 aircraft.

Bauernschmidt in August 2016 became the first female executive officer of an aircraft carrier, the USS Abraham Lincoln. Most recently, she commanded the amphibious transport dock USS San Diego from November 2019 until October.

A 1994 Naval Academy graduate, Bauernschmidt was commissioned about two months after the first women ever to serve aboard combat ships received their orders, according to her Navy biography. Congress lifted the ban on women serving in such roles the year before.

"That law absolutely changed my life," Bauernschmidt told CBS News on Nov. 12, 2018. "We were the first class that graduated knowing and feeling honored with the privilege to be able to go serve along the rest of our comrades in combat."

A native of Milwaukee, Wis., she became a naval aviator in 1996 and spent her early career deployed in the Northern Arabian Gulf with Helicopter Anti-Submarine Squadron Light 45 aboard the destroyer USS John Young, according to her biography.

She later served as an instructor pilot, department head and executive officer of several helicopter squadrons. She has more than 3,000 flight hours.

Bauernschmidt in 2013 also served as senior military adviser to the State Department Office of Global Women’s Issues, “enhancing women’s peace and security through worldwide initiatives,” according to her biography.