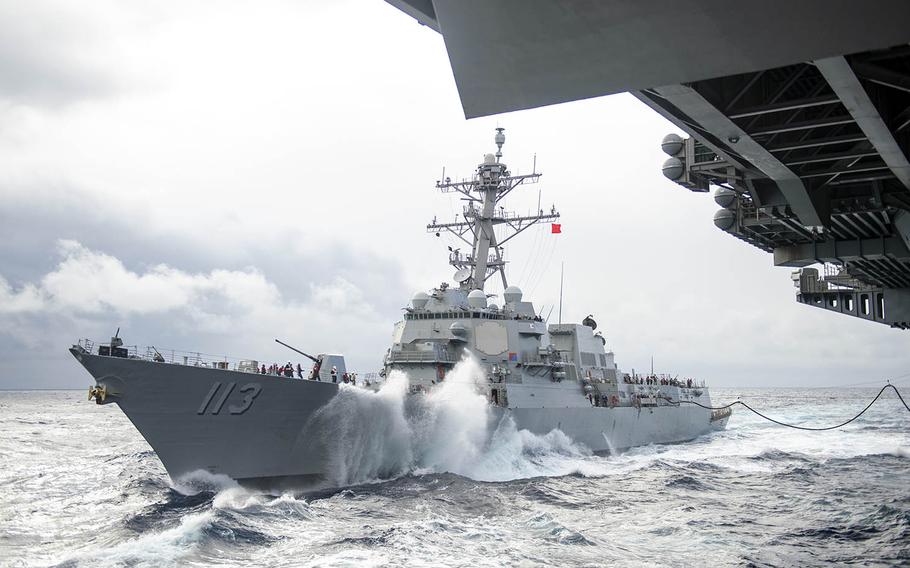 The guided-missile destroyer USS John Finn has returned to San Diego, its homeport, after a busy four months in the Indo-Pacific region on its first overseas deployment, according to the Navy.

The John Finn, an Arleigh Burke-class destroyer, arrived home Friday after finishing its work with both the Theodore Roosevelt Carrier Strike Group and the 7th Fleet.

During its Indo-Pacific tour, the John Finn took part in a two-carrier exercise in the South China Sea and transited the Taiwan Strait, exercises that constitute a U.S. response to a growing Chinese military presence in the region.

"John Finn provided presence and maintained the freedom of the seas while deployed," the ship’s skipper, Cmdr. Bralyn Cathey, said in a Navy statement. "My crew and ship were proud to show the flag abroad while executing myriad missions and exercises during our maiden deployment."

The John Finn on March 10 became the third U.S. warship in just over a month to transit the 110-mile-wide Taiwan Strait. The destroyer and its strike group partners also joined the Nimitz Carrier Strike Group for exercises in the South China Sea on Feb. 19.

Before steaming for the Western Pacific, the John Finn made history in November by becoming the first Navy warship to shoot down an intercontinental ballistic missile with a SM-3 Block IIA interceptor missile. The test demonstrated one of several layers of homeland defense against ICBMs, according to the Defense Department Missile Defense Agency.

The John Finn, standing off Kauai, Hawaii, brought down the ICBM launched Nov. 17 from Kwajalein Atoll in a simulated strike on Hawaii. It was the first successful use of an SM-3 against an ICBM, according to the agency.