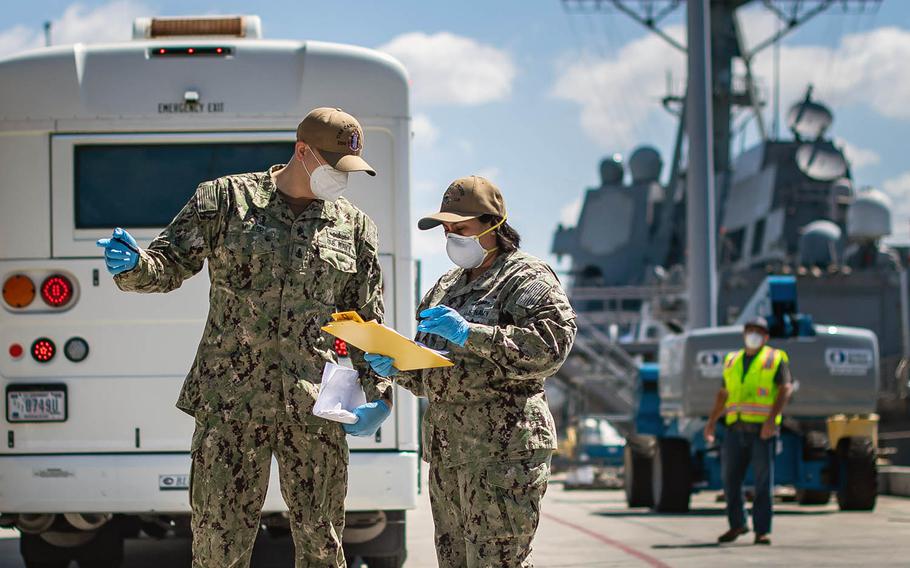 Sailors check muster sheets May 18, 2020, during a crew swap for the USS Kidd, docked in San Diego, in the next phase of the Navy's plan to eradicate the coronavirus from the ship and crew. (Alex Corona/U.S. Navy)

The Navy on Monday swapped out the caretaker crew aboard the USS Kidd with about 90 sailors confirmed to be free of the coronavirus.

The guided-missile destroyer has been at Naval Base San Diego since April 28 dealing with an outbreak of COVID-19, the disease caused by the virus, that occurred while the ship was at sea, the Navy said in a news release Monday.

The ship underwent disinfection after arriving at port, and a group of a sailors remained on board to operate essential services, the Navy said.

Other crew members and anyone testing positive for the virus were removed from the ship and placed in either isolation or quarantine, the Navy said.

The news release did not indicate the number of Kidd sailors testing positive.

The Associated Press reported earlier this month that 78 sailors of the crew of 330 had been infected.

The Roosevelt has been sidelined in Guam since late March dealing with an outbreak that has infected more than 1,000 sailors and left one dead.

The carrier is expected to set sail later this week with a crew of roughly 3,000, leaving behind about 1,800 crew members still in quarantine.

The Navy described the Monday crew swap as “the next phase of its aggressive response” to the outbreak on the Kidd and getting the ship back to deployment at sea.

The entire crew of the Kidd was retested before the transfer, and the results of those tests “informed decisions about who to transfer and who should remain in quarantine or isolation,” the Navy said.

Cleaning of the ship and medical oversight and care of the crew is expected to continue for about two more weeks, the Navy said.

All crew members will be retested before getting underway for deployment, the Navy said.