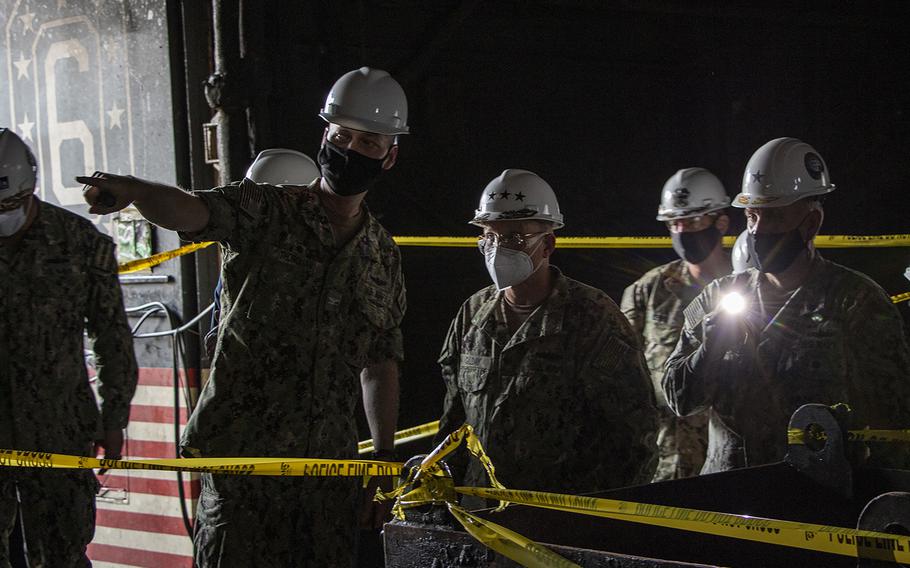 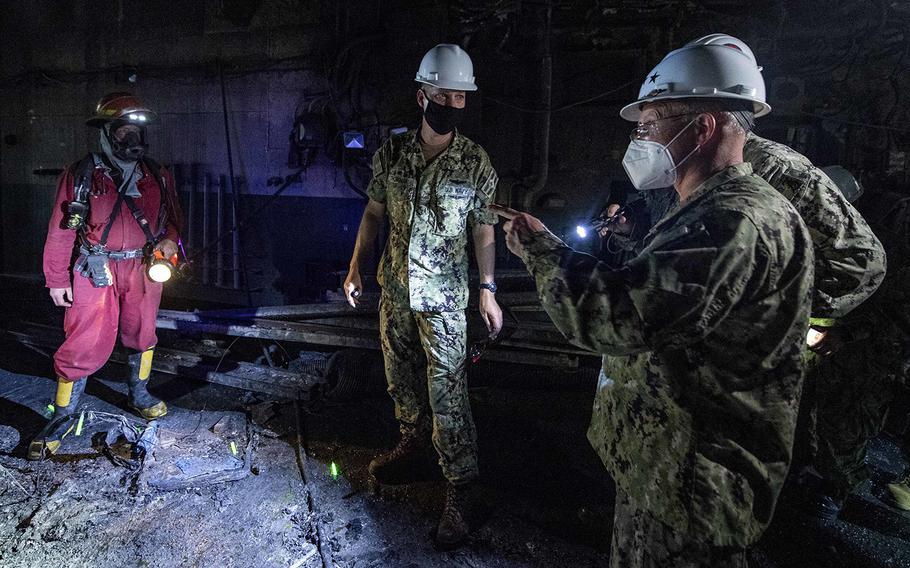 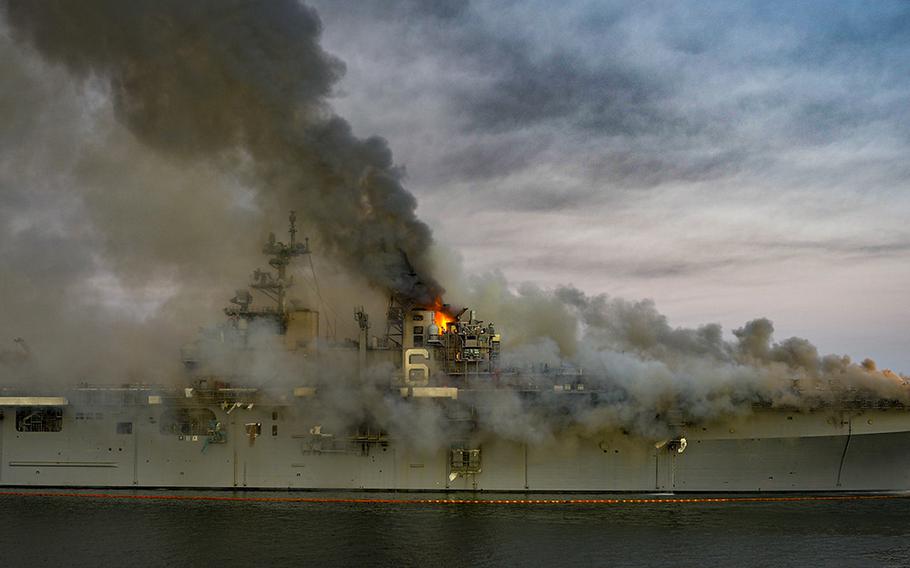 WASHINGTON— Firefighters combating the blaze aboard the USS Bonhomme Richard faced zero visibility and the threat of explosions as the fire spread through nearly all of the ship’s decks, Adm. Mike Gilday, the chief of naval operations, described in an email to senior naval leaders.

The fire, which began July 12 and burned for four days, caused extensive damage to the amphibious assault ship now based at Naval Base San Diego where it was nearing the end of a maintenance period.

Gilday visited the ship Friday and described his observations and discussions with firefighters in an email Wednesday addressed to admirals and master chiefs and obtained by Stars and Stripes.

The ship has sustained fire and water damage on 11 of its 14 decks, Gilday wrote. He was able to walk throughout sections of the ship five decks below the flight deck and examine the superstructure, where the bridge is located. The superstructure “is nearly gutted,” he wrote, as are sections of some of the decks below. He also wrote the Naval Sea Systems Command’s assessment of the damage is still ongoing.

“Sections of the flight deck are warped/bulging,” Gilday wrote. “The fire started in the lower vehicle storage area — six decks below the flight deck and near the middle of the ship — spreading aft, forward and up.”

Gilday also repeated his public statements from Friday that wind and explosions allowed the fire to spread and become intense. Wind fueled the fire “as the vehicle storage area leads to the well deck, which opens to the air at the stern gate,” he wrote.

The intensity and uncertainty of the explosions made it difficult to get the fire under control sooner. The fire was able to spread “quickly up elevator shafts, engine exhaust stacks, and through berthing and other compartments where combustible material was present,” Gilday wrote.

It took more than 400 sailors from 12 nearby ships and thousands of water bucket drops from helicopters to put out the blaze. During the effort to extinguish the multiple fires, 40 sailors and 23 civilians were treated for minor injuries.

Gilday praised the work of sailors, some of whom went aboard the ship eight times to fight the fire.

“They had experienced the intense, inferno-like heat, the dark smoke that obscured view of teammates by their side, and the explosions — the latter had to be like a mine field … unknown when and where, and how severe, those blasts might be. Some had been knocked down by these blasts — some, more than once — but they got up, refocused and reattacked.”

Gilday’s letter did not address the cases of the coronavirus that stemmed from the fire.

On Friday, two sailors who supported the firefighting efforts tested positive for the coronavirus after having symptoms, Lt. Cmdr. Nicole Schwegman, a Navy spokeswoman, said in a statement Thursday. The Navy then conducted contact tracing and put 27 sailors on restriction of movement due to their close contact with the infected sailors. No additional sailors who supported the firefighting effort have tested positive as of Thursday, according to Schwegman.

But Gilday did write about his discussions with federal firefighters who described the conditions they faced fighting the blaze throughout the ship.

The Navy’s effort to teach sailors to be resilient and competent starting at basic training was evident in how they meet the challenge of the fire, Gilday wrote.

“As described by those federal firefighters, the competency, fearlessness, resiliency and confidence displayed by those sailors most definitely exhibits our Navy culture. It was tested on Bonhomme Richard. My gut tells me our sailors met that challenge head-on,” he wrote.

The Navy is conducting three investigations to determine how the fire started, the response to fight it and lessons learned, Gilday said Friday. The Navy is also assessing the ship’s future and whether it will return to sea.

Gilday wrote the Navy is committed to “thoroughly look into and learn from the fire.”