A 355-ship fleet remains the goal, but readiness must be the priority, Navy’s top admiral says 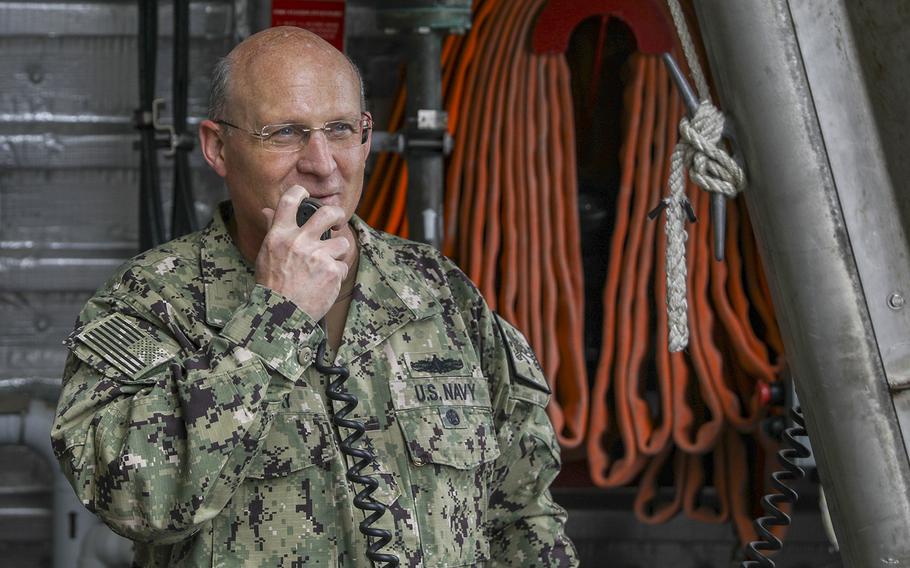 Chief of Naval Operations Adm. Mike Gilday addresses the crew aboard the Freedom-class littoral combat ship USS Billings on March 3, 3031. In a webinar Tuesday, April 27, 2021, with the Center for Strategic and Budgetary Assessments, a Washington think tank, Gilday said a 355-ship fleet remains the goal for the Navy. (Austin Collins/U.S. Navy)

Gilday said he won’t sacrifice capability and readiness in exchange for a larger fleet.

“I think that we need a fleet that's more ready, more capable and more lethal more than we need a bigger fleet that's less ready and less capable and less lethal,” the admiral said during a webinar with the Center for Strategic and Budgetary Assessments, a Washington think tank.

Speaking a day after the USS Firebolt fired warning shots at three Iranian Revolutionary Guard ships that came within 68 yards of the Navy patrol boat and a Coast Guard patrol boat, Gilday said investments in service members and “new training frameworks” must be a priority as strategic threats grow.

“I truly feel that if we do get in a scrap with an adversary that our fleet and its commanders are likely not to meet all of our expectations but will certainly fall to the level to which we have trained and prepared them for the fight,” Gilday said ahead of the service’s 2022 budget hearing before the House Appropriations Committee on Thursday.

Still, the Navy’s top officer said shipbuilding remains a priority for the service, which has publicly sought a 355-ship fleet since 2016. The Navy now has 296 manned ships, according to an April 22 Congressional Research Service report.

“Every single assessment that has been done on our force structure since 2015 has called for a larger, more capable Navy in this era of great-power competition that not only deter but also to be able to respond if required,” Gilday said.

The administration of former President Donald Trump released a document Dec. 9 that called for up to 446 manned ships and up to 242 unmanned vessels by 2045. But Gilday said Tuesday, within the service, the goal hasn’t changed.

The document was considered the Trump administration’s “own vision for future Navy force structure and/or a draft version” of the 2022 30-year Navy shipbuilding plan due to Congress later this year, according to the congressional report.

“The future naval force structure assessment sent up by [former Defense] Secretary [Mark] Esper certainly went far above 355, but 355 is the law of the land right now, and I think given where we are just shy of 300, that's not a bad target,” Gilday said.

Whether growing to a 355-ship fleet is possible remains to be seen. Gilday said recent projections indicated the Navy would need a 4.1% boost in its budget to achieve a 355-ship fleet within the next decade.

“But as you’re probably well aware, the buying power of the Navy has been relatively flat since 2010,” he said. “We’re going to see us just hovering – lucky to actually keep pace with inflation.”

Further, rising personnel and maintenance costs “typically rise at a rate higher than inflation,” Gilday said, which will “potentially put a squeeze on the shipbuilding budget, unless money is found elsewhere outside of Navy's top line.”