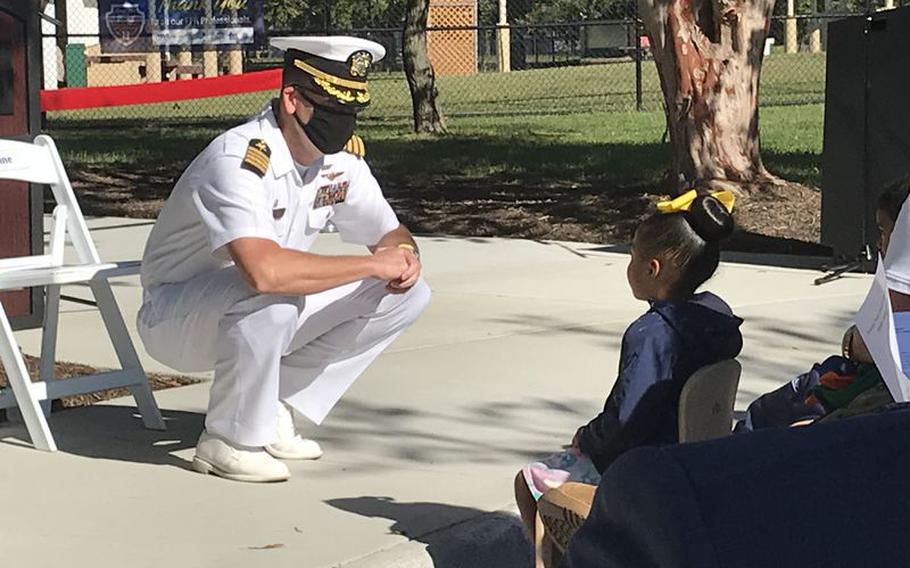 (Tribune News Service) — Up at the Navy’s boot camp, a new sailor was worried about a classmate, and called his dad, Capt. Jonathan Kline, for some advice.

“He said, ‘Dad, what’s that place people’d go to when they needed a hand?’ and I said: ‘Oh, you mean Fleet and Family,’” Kline recalled.

Fleet and Family Services is one of those Navy functions that most people in the service have heard of – but Kline has learned a lot more about it during the past three years as commander of Naval Support Activity Hampton Roads, which runs the service at Navy installations in Norfolk, Portsmouth and Chesapeake.

“On sea duty, I knew they were there if I or one of my sailors needed them, but I really didn’t think too much about how they do what they do,” he said.

“What I’ve learned is about the wide range of expertise and passion they bring,” he said.

He’s seen that across the range of services NSA Hampton Roads handles. For example, a suggestion from the command’s former school liaison officer, Tiffany Johnson, led to the “Servicing Our Schools” initiative. As part of it, more than 400 sailors lend a hand to teachers in more than 25 Chesapeake schools.

A key part of Kline’s job is working with city governments, and where his regular meetings with Norfolk often focus on ways to manage the heavy traffic to and from Naval Station Norfolk, working with Chesapeake led to some new thinking at NSA Hampton Roads.

“There’s not a big installation footprint there,” he said. But there are many sailors and Navy families in the city.

“We think a lot about the impact of the military on a community, but it is not only negative. There’s the talent, the energy we can bring,” he said.

The school initiative made that concrete, he said. And ways sailors can contribute to Norfolk and Portsmouth are very much on the table these days when he sits down every quarter to meet with them.

Navy children are a big concern of the support activity, which reopened the Navy’s first purpose-built childcare center, the Sewells Point Child Development Center, in October, after a six-year gap for renovations. The command is scouting out locations for an additional one or two centers for children up to 5, Kline said.

NSA Hampton Roads also is talking to local schools about using their facilities for before- and after-school programs. The idea is to free up space in its centers for older children, to further expand facilities for the very youngest.

“If you’re worried about who’s taking care of your children or how they’re being taken care of, you’re not going to be able to concentrate as well at work,” he said.

His command, which serves Naval Station Norfolk, Naval Medical Center Portsmouth and the Northwest Annex and Fentress landing field, coordinates with counterparts at Naval Air Station Oceana to make sure any Navy family in the area can get the childcare it needs.

Kline’s job is making sure NSA Hampton Roads is providing the basic services of any small city — which is what any Navy installation really is. They range from public works to parks and recreation to security.

Fleet and Family Services pitches in to help with big events in sailors’ lives: a new baby, buying a home. They’re there if sailors get in a jam over money or if the stresses of military life are particularly hard to bear. They help with budgeting, spouse’s work searches, transition to civilian life, pre-deployment support, children with exceptional needs and the many tasks that fall into a Navy family’s lap with a transfer.

“If you’re a squadron commander, you want to be confident that the gate is going to open when you’ve got a sailor who has to be there at 4 in the morning,” he said.

“You don’t really care about how it happens. You just need it to happen.”