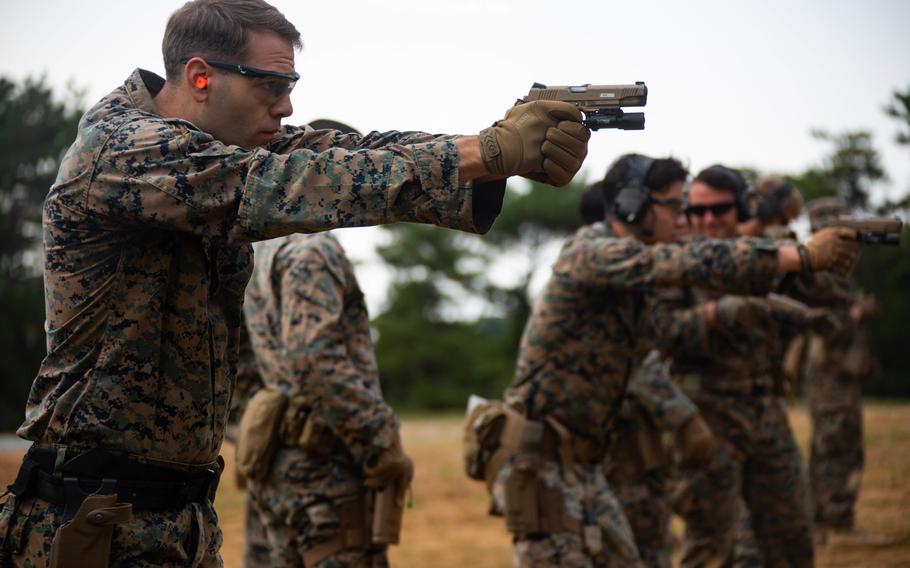 The Marine Corps wants an improved combat uniform that has fire protection and better dampening of infrared signatures, but it doesn’t want to pay a lot more for it.

Marine Corps Systems Command is looking for a uniform that would combine the benefits of the flame-resistant organizational gear, known as FROG, with the durability and comfort of the existing digital-pattern combat utility uniform, and at a price point closer to the latter.

A FROG set costs $184, more than twice the $89 for a combat utility top and trousers, Military.com reported. The Corps wants the new uniform to cost less than $106.

Both existing uniforms, worn in nontropical environments, shield Marines from visual detection and dampen their signatures in the near infrared portion of the light spectrum that’s invisible to the human eye. But only FROG also offers flame protection.

“A single-issued uniform with these protection properties will allow the Marine Corps to focus on optimizing funds and streamline the acquisition process while providing maximum protection and comfort to its service members,” Marine Corps Systems Command said in a solicitation updated this month.

The new uniform would reduce the “logistical burden” of having a separate fire-resistant uniform, the command’s Kelly Flynn told Military.com. “The Marine Corps expects a cost saving of a few million dollars due to not having to buy replacement FROGs.”

The service has “active but separate research and development efforts” for treating nylon/cotton blend textiles used in standard uniforms to reduce signatures and improve flame resistance, the solicitation stated. It’s seeking to reduce the fabric’s visibility to sensors that detect more of the infrared spectrum.

Flame resistant materials are designed to self-extinguish and prevent burn injuries such as those caused by roadside bomb blasts that have become commonplace in combat since 2001.

About four years ago, the Corps updated the long-sleeved shirt and trousers of its Enhanced Flame-Resistant Combat Ensemble, a part of the FROG system issued to Marines and some sailors.

The Marine Corps could evaluate somewhere between 100 to 200 uniform sets from contractors who respond to the solicitation, the documents show. They’re expected to be identical in design to the existing utilities but with a reinforced crotch and bigger belt loops.

The project is still in the research and development phase, and no companies have been selected to provide uniform samples, Flynn said. The service hasn’t set a date for wear tests or said which units would perform them.

Meanwhile, the Navy is looking for cost-effective commercially available black T-shirts that are both flame resistant and moisture-wicking for wear with its two-piece flame resistant uniforms on ships, that service said in a request for information this week.