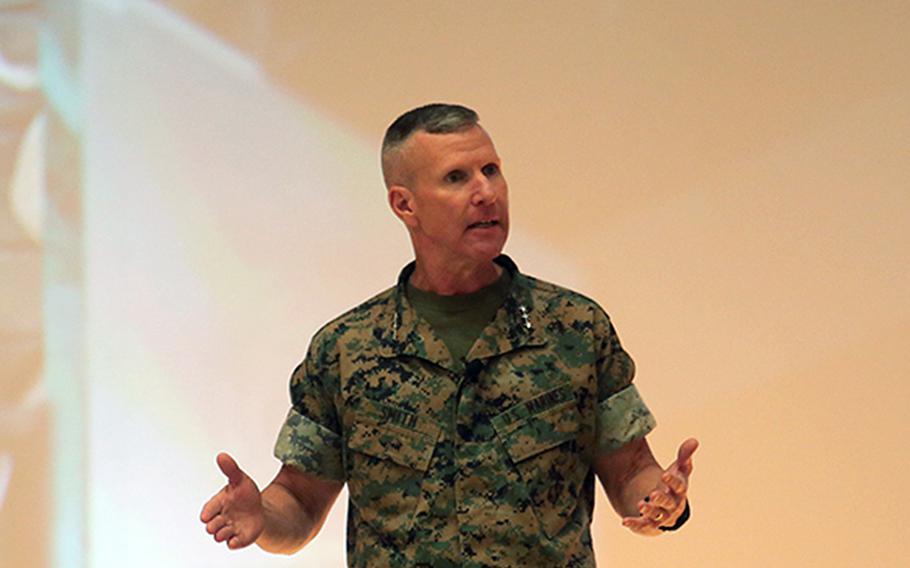 Lt. Gen. Eric Smith, commanding general of Marine Corps Combat Development Command and deputy commandant for Combat Development and Integration, speaks at Marine Corps Base Quantico in August 2020. The Corps plans to use small teams and long-range anti-tank systems to take out its enemies on the future battlefield, Smith said this week at a defense conference. (Marine Corps Systems Command)

Lt. Gen. Eric Smith, commanding general of Marine Corps Combat Development Command and deputy commandant for Combat Development and Integration, speaks at Marine Corps Base Quantico in August 2020. The Corps plans to use small teams and long-range anti-tank systems to take out its enemies on the future battlefield, Smith said this week at a defense conference. (Marine Corps Systems Command) 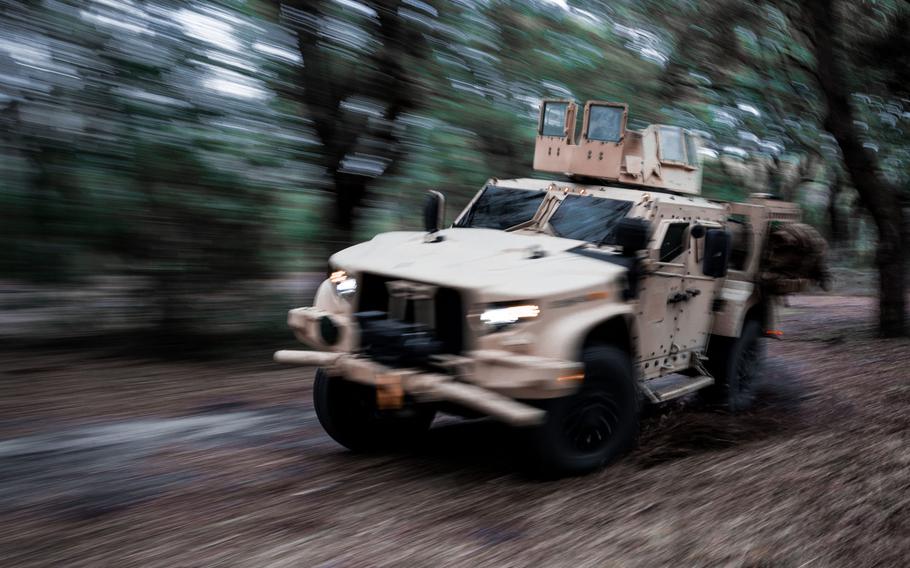 The Joint Light Tactical Vehicle on Camp Lejeune, N.C., Feb. 2, 2021. The Marine Corps is fielding long-range precision weapons that can be fired from mobile platforms like the JLTV as the service divests its heavy armor units. ( Zachary Zephir/U.S. Marine Corps)

Marine Corps experiments show lightweight vehicles mounted with long-range weapons can take out enemy tanks at a distance 15 to 20 times greater than a Marine tank could, a top general said this week.

The anti-tank mission was one of the examples cited by Lt. Gen. Eric Smith, deputy commandant for combat development and integration, for how the service is reshaping to create a “light, lethal and austere” force by the end of the decade.

Smith’s comments, made Wednesday at the International Armoured Vehicles Conference hosted by Defence IQ, were first reported by USNI News.

Law enforcement, cannon artillery, infantry and conventional aircraft units are also being cut or restructured, and officials expect to cut 12,000 Marines from the service’s troop strength by 2030.

It’s all in preparation for a future battlefield where U.S. forces expect to face more conventional forces with capabilities similar to their own.

To combat these “near-peer adversaries,” the Marines could employ groups of about 75 Marines on the first island chain off the coast of mainland Asia and outfitted with their own aircraft and surface ships to maneuver quickly and keep their enemy’s resources tied up trying to hunt them down.

“In the past, you would think, ‘Well, there’s 75 Marines in location X, they’re not a threat,” Smith said, as quoted by USNI News. But “if I can sink one of your billion-and-a-half-dollar warships with a one-and-a-half-million-dollar missile, I am a threat.”

That kind of capability “may change the calculus, if I can do that and rapidly move using things like our Joint Light Tactical Vehicle and make it incredibly hard for you to find me,” Smith said. “You have to respect that very small unit, of which we will have dozens and dozens and dozens placed strategically.”

U.S. forces have witnessed that kind of imbalance firsthand over the past 20 years, as insurgents used cheap improvised bombs to kill or wound troops and disable their expensive hardware.

The Marines plan to use more drones and robotics themselves for combat, as well as for resupplying food, water and munitions, and as potential decoys, Smith said.

A nimbler Marine Corps, capable of hit-and-run style tactics, would take away the “luxury” an enemy might have of focusing its intelligence, surveillance and reconnaissance on “a few key warships or a few key larger formations who may be closing in on the area,” he said.

The service is fielding long-range precision weapons that can be fired from mobile platforms like the JLTV and aircraft, as well as ground-based anti-ship missiles it could use to stop enemies hundreds of miles from a piece of contested territory. That would free up Navy ships to focus on controlling the sea, Smith said.

But while experiments have shown that a JLTV could “kill armor” at far greater distances than a tank, Smith said the service didn’t decide to divest its hulking M1A1 Abrams fleet because they weren’t good tank-killers. Rather, it’s a matter of logistics.

“We can kill armor formations at longer ranges using additional and other resources without incurring a 74-ton challenge trying to get that to a shore, or to get it from the United States into the fight,” he said. “You simply can’t be there in time.”

Still, the Corps’ changes have been criticized by some tankers, such as former Marine armor officer Dan Grazier, a military fellow at the nonprofit watchdog Project on Government Oversight, who spoke to Stars and Stripes last fall about his misgivings about the redesign’s rationale.

“This whole idea of gearing the Marine Corps entirely toward fighting an island campaign against China, I think is greatly misguided, not least because the kind of conflict that envisions is extremely unlikely,” Grazier said.