Parris Island Marine Band is up for an Emmy; here's how a South Carolina nurse inspired the piece 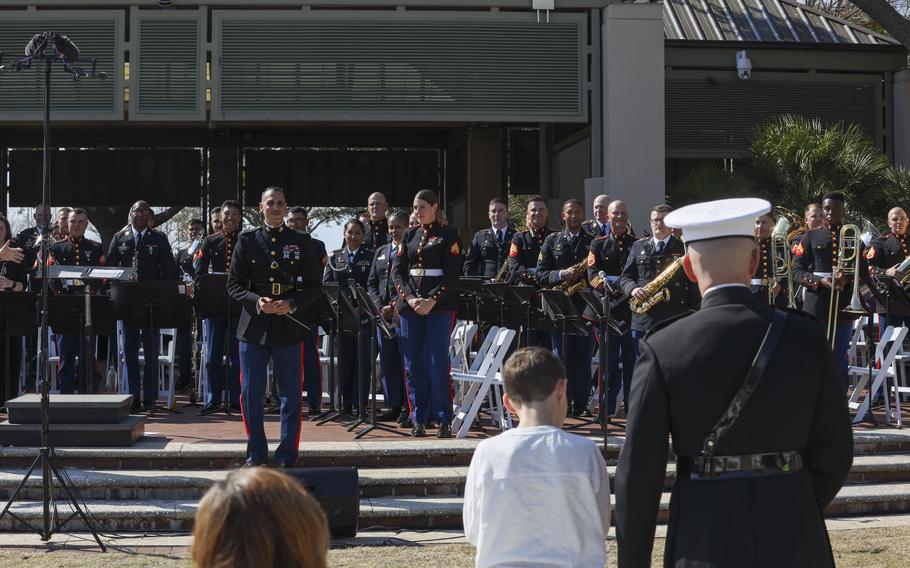 Marines with the Parris Island Marine Band, Headquarters and Service Battalion, perform in a combined arms concert with the 282nd Army Band, Fort Jackson, S.C., at the Beaufort Waterfront Park, March 5, 2022. An original composition performed by the Parris Island Marine Band — inspired by its musical director’s wife and her work as a nurse during the COVID-19 pandemic — has been nominated for an Emmy. (Godfrey Ampong/U.S. Marine Corps)

(Tribune News Service) — An original composition performed by the Parris Island Marine Band — inspired by its musical director's wife and her work as a nurse during the COVID-19 pandemic — has been nominated for an Emmy.

"You Were There" salutes first responders who continued to work at the height of the pandemic, from doctors and nurses to grocery store workers to garbage collectors.

"They were there when we all needed them," said Mark Pellon, a chief warrant officer 3 at Marine Corps Recruit Depot Parris Island and musical director of the band, "and because of that the Marines will be there when they need us and that was kind of the premise of the entire message."

The Parris Island Marine Band is made up of 50 instrumentalists, all Marines, who perform at community events in Beaufort County and up and down the Eastern Seaboard at Marine functions.

A former headquarters and service battalion commander, an Emmy winner himself, challenged Pellon to submit the composition. “Why not?” Pellon thought, “what’s the worst that can happen.”

Pellon was shocked when the COVID composition was nominated for a regional Emmy by the National Academy of Television Arts and Sciences' Southeast chapter, a professional association dedicated to media excellence.

An Emmy nomination is a first for the Marine Band at Parris Island in Port Royal, one of the nation's premier military bands. It's been around since 1915, when The Department of the Navy transferred Marine Corps recruit training to Parris Island.

Pellon will be on hand for the 48th annual Southeast Regional Emmy Awards June 18 at the Grand Hyatt in Buckhead, Atlanta, when the winners will be announced.

Pellon was raised in the Miami area. His wife, Lakin Pellon, is from eastern Kentucky.

Prior to moving to Beaufort County, Lakin was working with COVID patients in Los Angeles, one of the most hard-hit areas in the country.

After the couple moved to South Carolina in June 2020, Lakin continued to work with COVID patients at Beaufort Memorial and Hilton Head hospitals, working at both because of COVD-19-related staffing demands.

"It was a very difficult thing to watch her go through," Pellon said.

Watching the struggles of his wife, who continues to work at Beaufort Memorial, was the inspiration for the project, which is a salute to those working on the front lines, from doctors and nurses to grocery store workers to garbage collectors.

"The core message was that we Marines are typically the first responders when our nation calls," Pellon said. "In a situation like this, we were not the ones who had to answer that call. It was our first responders."

While the project was Pellon's vision, it was a collaboration.

The music was written by Onsby Rose, director of the music program at Dordt University in Iowa, a former Marine musician. Pellon and Rose had met a year before the pandemic began when Pellon recorded a piece of music Rose wrote. When Pellon asked him to write the music for the COVID composition, he flew to South Carolina and worked with the Marine Band for a week.

Staff Sgt. Victor Norris, a saxophonist in the band, wrote the words for the narration that accompanies the piece.

The 50 Marine musicians make up the concert band collectively, performing at graduation and colors ceremonies on the base and community concerts. It also performs in support of the recruiting efforts in the Marine Corps eastern recruiting region. The band's musicians make up smaller groups, too, such as a jazz big band, jazz combo, brass and woodwind quintets and a band that plays popular music.