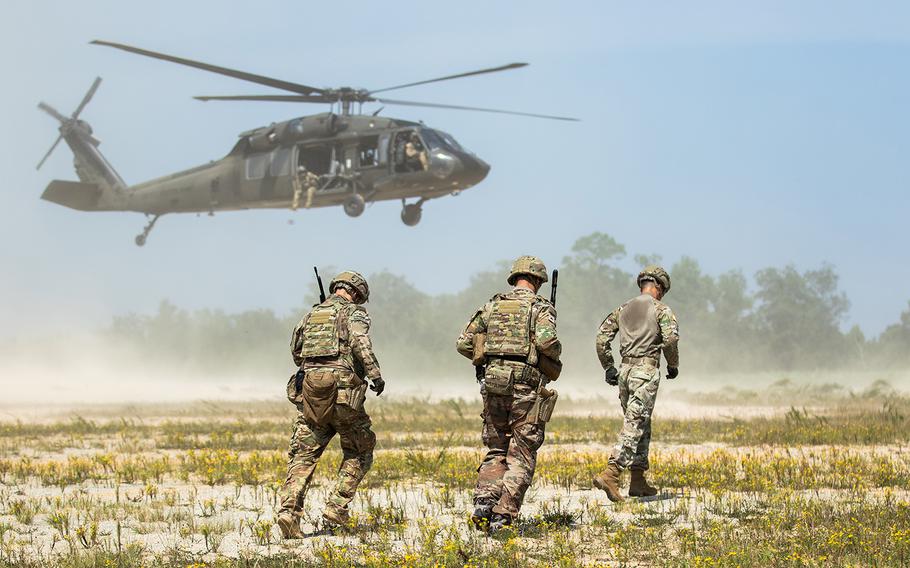 WASHINGTON — Members of the Army’s 1st Security Force Assistance Brigade will deploy to Africa soon to provide training and assistance to African forces as a way to compete with Chinese and Russian influence on the continent, the Pentagon announced Wednesday.

The SFAB unit, based at Fort Benning, Ga., will be deployed to conduct missions to train, advise and assist “in spotlight African countries,” Alyssa Farah, the chief Pentagon spokeswoman, said in a prepared statement. No countries were listed in the statement nor how many people from the brigade will deploy.

The deployment will be the “first of many decisions regarding [U.S. Africa Command’s] mission,” according to the statement.

The SFAB soldiers will replace members of an infantry brigade from the 101st Airborne Division out of Fort Campbell, Ky., who will return home in the coming weeks.

“Army SFABs are manned, trained and equipped specifically for the train, advise and assist mission. This allows them to perform this important great-power competition role more effectively and more efficiently than conventional units,” the statement reads.

Defense Secretary Mark Esper has been conducting a review of the military’s combatant commands to determine how they can be aligned better with the 2018 National Defense Strategy. which prioritizes great-power competition against China and Russia.

“The purpose is to make sure that what we’re doing is aligned with the National Defense Strategy, so I get the force sizing right, that the activities, the actions and tasks right in each theater of command,” Esper said Tuesday to reporters traveling with him to Europe.

For several years, AFRICOM has been focused primarily on counterterrorism operations as well as building relationships and training opportunities with African partner countries. U.S. military forces and local partners have conducted operations in Somalia against the al-Shabab terrorist group, which is seen as a serious threat in eastern Africa.

While al-Shabab is considered one of the biggest threats on the continent, “competition with Russia and China on the continent is critically important. We think we have a competitive edge there,” Maj. Gen. Roger Cloutier, the commander of U.S. Army Africa, said Wednesday to reporters at the Pentagon via a teleconference from Italy.

China has a military base in Djibouti, not far from the strategic American base there, and members of the Wagner group, a Russian mercenary organization, are known to operate in Libya.

Cloutier said African allies know the U.S. is a better military partner than Russia or China.

“So the competitive advantage that we have on the African continent, I think, is the professional nature of our military, the discipline of our soldiers, the great training that we can provide, and the fact that we believe we’re the partner of choice. So that’s how we compete head-to-head with them,” he said.

The U.S. Army Africa commander emphasized Esper’s review was not taking AFRICOM away from its commitments to the region.

“The message I’m relaying to my partners is that we’re not walking away. We are still engaged,” he said, adding U.S. Army Africa will have its largest exercise — Exercise African Lion — in late March with about 9,000 soldiers from the U.S., African partners and allied nations participating.