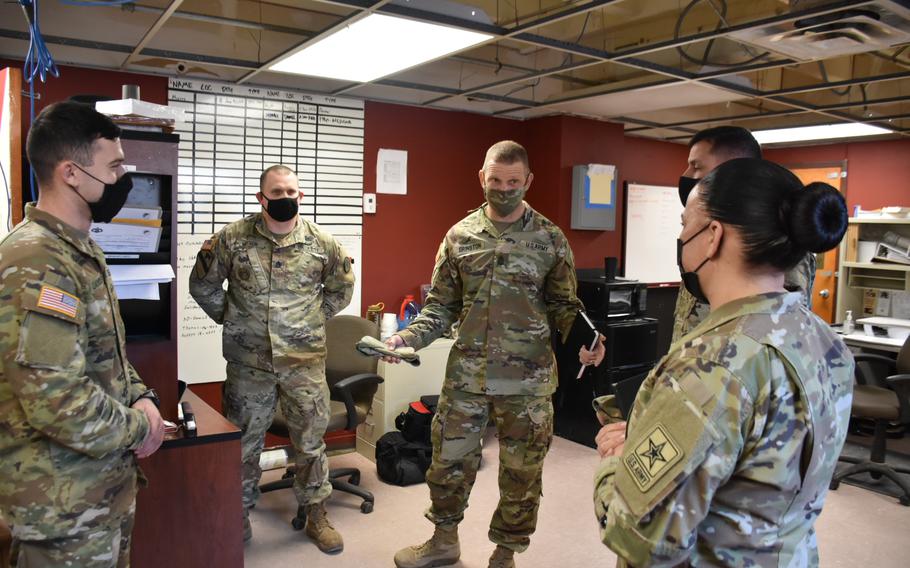 After hearing concerns from leadership at Fort Hood, Texas, about the conditions of the barracks, Sgt. Maj. of the Army Michael Grinston toured the living space of soldiers in the 3rd Cavalry Regiment. He also spoke with leaders about how to address soldiers’ concerns while waiting for pledged funding to be released for renovations. (U.S. Army)

AUSTIN, Texas — More than $1.65 billion will flow to Fort Hood for housing, day cares and unit facilities in the next 10 years as the Army and a private housing company have pledged funds to improve infrastructure on the base, Army Chief of Staff James McConville said Thursday.

The Army will spend $1.13 billion through a 10-year investment plan, McConville said during a visit to the base.

“This is a very important post to the U.S. Army,” he said. For anyone who serves here, “we ask a tremendous amount out of them.”

McConville announced the funding during a visit to Fort Hood to see progress made to improve the command climate and culture of the base after a series of incidents there led Army senior leadership to assign a civilian committee to investigate conditions.

The Fort Hood Independent Review Committee, which was appointed following the disappearance and death of Fort Hood Spc. Vanessa Guillen in April, released a report in December that highlighted several concerns at the base.

While housing and the barracks were not a focus of the report, the committee said its members heard enough complaints of health and safety hazards and poor maintenance that it recommended “further investigation to determine what actions might be taken to better address these quality-of-life issues.”

The Army funding that McConville discussed Thursday will come from the current facilities investment plan and go to support quality-of-life and military operations facilities. It includes $496 million for barracks construction, $1.5 million for child development centers, $428 million in maintenance facilities and company operation centers, and $280 million in power projection platforms.

Meanwhile, Lendlease, the private company that manages family housing for Fort Hood, has committed $519 million in “the next couple of years” to improve options for families that chose to live on base, McConville said. It will include new construction of 540 homes for noncommissioned officers, demolition of 586 old homes, and major renovations and infrastructure improvements for 2,287 homes.

“This is going to significantly improve the quality-of-life for our soldiers on post,” he said.

The housing investment is part of $1.1 billion in new private investment Lendlease and the Army announced last month to improve housing at six bases where the company manages homes.

Construction is expected to start in the spring, Lendlease said.

“Thank you to the soldiers and families who participated in various town halls, focus groups and surveys. This accelerated funding is a direct result of your input during those open forums,” Lt. Gen. Pat White, commander of III Corps and Fort Hood, said in a statement. “I look forward to seeing our soldiers and their families in modern housing that they can be proud to call home. People are our greatest asset, and we owe it to the soldiers and families who work and live here to provide them the best housing possible.”

As soldiers wait for funding to make its way to the barracks, McConville said leaders at Fort Hood have plans make do with current infrastructure and are working with units to improve security around the buildings.

“We’d like to see more lights and cameras. That’s something we can do right now. We don’t have to wait to have new barracks to do that,” he said.

This work is in the hands of unit leaders who have responsibility of the barracks where their soldiers reside, McConville said.

“They need to make sure that they are clean, that they’re safe and they’re secure and that we provide the quality-of-life that our soldiers deserve. We can’t give everyone brand-new barracks, but we can give them barracks that are safe and have appropriate life health, safety conditions. They should be clean and they should be functional.”