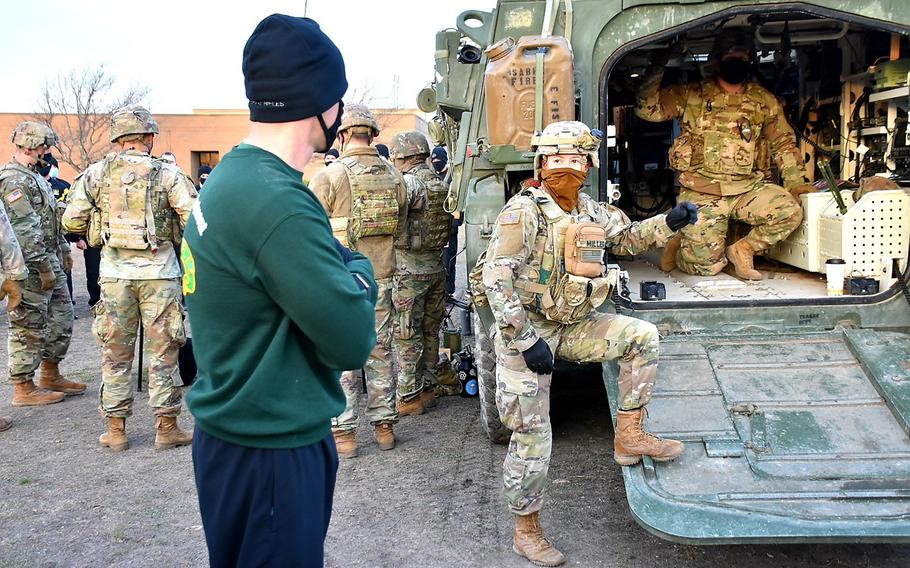 AUSTIN, Texas — Soldiers of the 3rd Cavalry Regiment will spend the majority of 2021 training individually and with their squads as the Fort Hood unit regroups from incidents last year highlighted in a recent review of the base culture and climate, the new regimental commander said.

“There are no easy fixes in the [Fort Hood Independent Review Committee] report,” said Col. Kevin Bradley, who became regimental commander Dec. 9, the day after the previous commander was fired following the report’s public release. Rebuilding this unit, is “going to take time,” he said during an interview about one month into the job.

The independent review committee was formed in July after the body of Spc. Vanessa Guillen, a soldier in the regiment, was found buried alongside a river in Bell County, miles from Fort Hood. Investigators determined fellow soldier Spc. Aaron Robinson killed Guillen with a hammer in a base arms room on April 22 and moved her body off base in a plastic container later that day.

During the two-month search for Guillen, her family said the soldier had been sexually harassed, which encouraged veterans and service members to come forward and tell their stories of harassment and assault in the military. Eventually senior Army leaders pledged to look into the allegations.

Five civilians were appointed to the committee, which found significant cultural and leadership problems at Fort Hood, as well as an environment “permissive” of sexual harassment and assault. It identified Guillen’s unit, the 3rd Cavalry Regiment, to have some of the most troubling statistics on base.

The regiment’s soldiers had the highest rates of drug and alcohol-related offenses of any other unit at Fort Hood, the highest rates of suicide among soldiers in their first enlistment and a general lack of trust in leaders, particularly among the women serving in the lower enlisted ranks, according to the committee’s report.

Women make up about 11% of the regiment’s nearly 4,400 soldiers, according to the report.

Soldiers in the regiment, which is known as “Brave Rifles,” were up to three times as likely to say fellow soldiers were engaged in criminal activity, the report said. A knowledge survey showed only 46% of the unit’s soldiers could demonstrate basic understanding on how to report a sexual assault and the support afforded victims, compared with about 55% of soldiers base-wide.

“Indeed, a noteworthy and troubling lack of overall respect and emphasis on dignity and equality was noted within the culture [of the 3rd Cavalry Regiment]. This is emblematic of a broader problem that may require further focus on personal development, adjacent to leadership development, in order to ensure an Army comprised of soldiers with reciprocal appreciation for the worth of their fellow soldiers,” the report stated.

After just a few days with the unit, Bradley had read the report, reviewed the troops and determined a scheduled January rotation at the National Training Center at Fort Irwin, Calif., needed to be canceled so the unit could stay home and focus on soldiers and families.

He said he told Army senior leaders that he preferred the regiment band together “to absorb what was in [the report] and truly address the problems in a coherent manner. To be able to do that was important.”

Gen. James McConville, Army chief of staff, agreed, and he wanted to give Bradley the opportunity to build his unit from the individual soldier up using a foundational readiness program. He visited Fort Hood this week to see cultural improvements for himself and spoke directly to this year’s training plans for the regiment.

“What we are advocating, or at least directing, is spending more time at the lower levels where you have these brand-new soldiers coming in. You build a solid foundation and when you get to combat training centers, we see much better results,” McConville said.

Seen as a culminating training event to certify a brigade as ready for combat, units spend months working their way up to a combat training center rotation, beginning first with certifying individual soldiers, then working up to large-scale operations. At the National Training Center, all these skills would come together against an opposing force in a simulated combat environment.

After returning from the holidays, the unit laid new plans that focus training through September on soldiers becoming experts at their jobs, while incorporating trust-building exercises, said Maj. Bradford R. Morgan, regimental operations officer. They’ve also pulled in resources related to the Army’s “This is My Squad” and “Golden Triangle” initiatives, which both aim to help leaders build trust through personal relationships with their soldiers as well as their soldiers’ families.

“People first is a mentality that we must apply not only through deliberately planned activities but also integrate within our daily routines,” Morgan said. Without building trust, the unit can’t meet its mission to be a lethal force in combat.

“If you cannot trust the trooper on your left and right to perform their job in combat, your supervisor to care about your family, or even feel safe amongst your peers on a military installation, there is a significant problem that must be immediately addressed,” Morgan said. “We summarize our approach to combating these trust-violating corrosives within the ranks as the following: Know your troopers, hold others accountable and leaders take action.”

Bradley emphasized there will be more opportunities for soldiers to participate in cavalry unit morale events known as spur rides as well as compete for the Expert Infantryman Badge and the Expert Soldier Badge.

“For our training path, we are not going to train at the same level. We’re not training as a regiment in the field and working on regiment tasks and fighting as a regiment. But what we thought was more important was to focus back on individual soldiers and squads,” Bradley said.

In competitions for each badge, the regiment will include scenarios that test a soldier’s knowledge of the Army’s sexual assault and harassment program or one that tests an understanding of Army values and ethics. Soldiers must prove mastery of these skills in the same way they are tested on assembling a machine gun, assembling a radio or navigating to points of land at night, Bradley said.

“If we are really going to get after the knowledge, it’s got to be part of the major events we’re doing,” he said.

Bradley said he hopes to have as many soldiers earn these badges by Brave Rifles Week in May, when the unit will celebrate its 175th anniversary with a weeklong celebration that includes gathering veterans of the unit to build comradery.

“Then that is the good jumping off point to continue our training path,” Bradley said.

The unit is rescheduled to train at the National Training Center in spring 2022, according to U.S. Army Forces Command. In the interim, McConville said the unit will continue to work its way up toward brigade-level training, and that progress “will determine what type of mission we will give them.”

As part of McConville’s visit, he said he met with soldiers and believes Fort Hood is improving since he last visited the post in September.

“The leadership has taken the Fort Hood independent review very seriously. They are getting after the notion of people first. I think we have a lot of work to do,” he said. “They are on a much more positive path and I think the leaders are making a difference.”