Fast and furious: Army to test laser weapon as it looks to field rapidly developed system next year 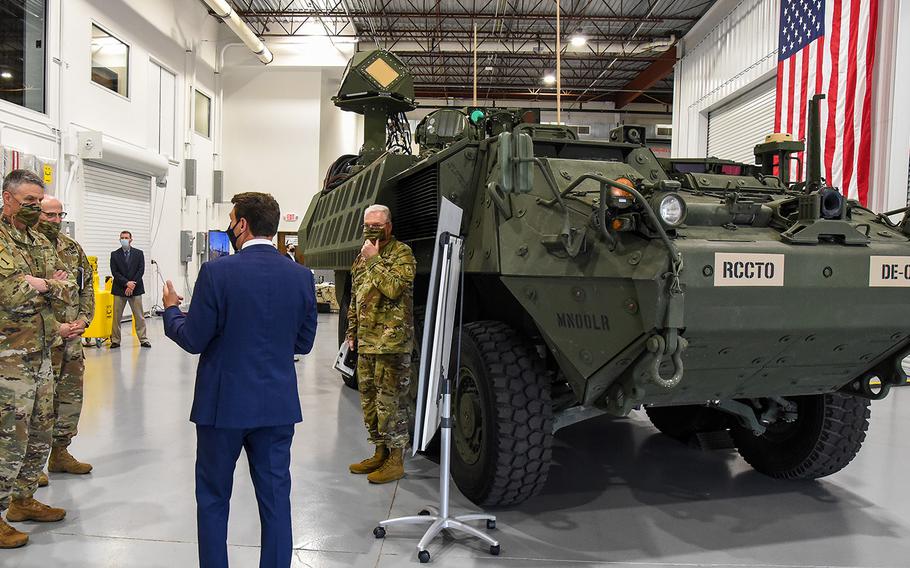 Buy Photo
Gen. Joseph Martin, the vice chief of the Army, left, views the first prototype of the service's new laser weapon, the Directed Energy Maneuver Short-Range Air Defense system, or DE M-SHORAD, during a visit to Huntsville, Ala., and Redstone Arsenal on April 29, 2021. (Corey Dickstein/Stars and Stripes)

Buy Photo
Gen. Joseph Martin, the vice chief of the Army, left, views the first prototype of the service's new laser weapon, the Directed Energy Maneuver Short-Range Air Defense system, or DE M-SHORAD, during a visit to Huntsville, Ala., and Redstone Arsenal on April 29, 2021. (Corey Dickstein/Stars and Stripes) 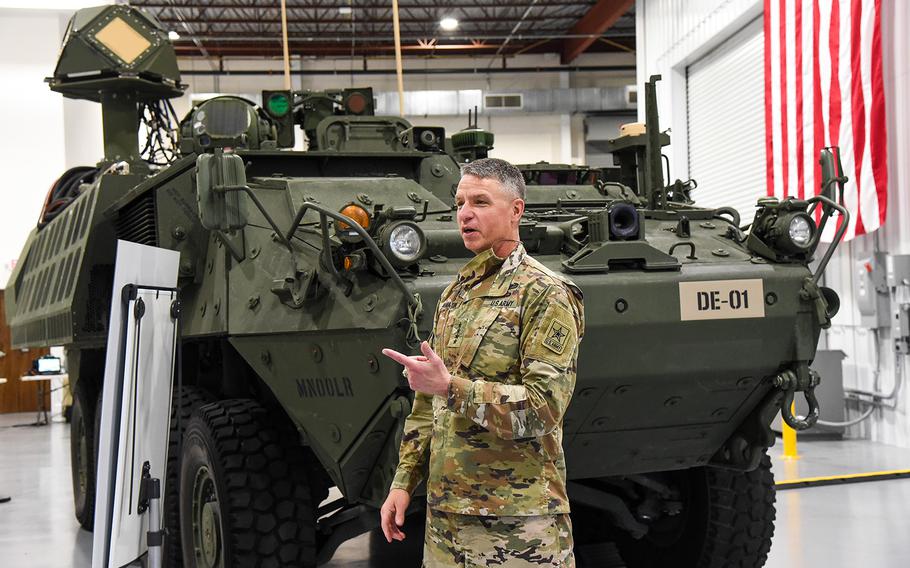 Buy Photo
Gen. Joseph Martin, the vice chief of the Army, speaks at Kord Technologies headquarters in Huntsville, Ala., where the company is working with the Army's Rapid Capabilities and Critical Technologies Office, or RCCTO, at nearby Redstone Arsenal to develop a new laser weapon. The first prototype of that weapons, the Directed Energy Maneuver Short-Range Air Defense system, or DE M-SHORAD, is pictured behind Martin, who visited April 29, 2021. (Corey Dickstein/Stars and Stripes)

REDSTONE ARSENAL, Ala. — The Pentagon is betting big that laser weapons, once firmly confined to the realm of science fiction, will prove to be critical battlefield technology as the Army’s first prototype laser weapon is set for its initial live-fire test this month.

In a battery of tests — beginning next week — the Army and Kord want to prove DE M-SHORAD’s ability to locate airborne threats, instantaneously lock on and track and then destroy them in a matter of seconds. The technology has “game-changing” potential for close range air defense against the near-peer rivals — namely China and Russia — that the Pentagon has shifted its focus to in recent years, said Gen. Joseph Martin, the Army’s vice chief of staff. Martin saw the first DE M-SHORAD prototype April 29 during a visit to the Army’s Redstone Arsenal in Alabama.

“Twenty-three months ago this was just an idea,” Martin said after crawling through the prototype system at Kord’s Huntsville headquarters just outside Redstone’s gates. “It’s very promising. It’s very powerful. There (are) many things we’ve got to do in terms of testing, and it’s about to go through a shootout to see how it does. But I can’t wait … to see what they can do with it.”

Martin has seen firsthand why the Army needs easily deployed systems to protect soldiers from quickly advancing airborne threats. As a two-star in command of U.S. and coalition land forces in Iraq in 2016 and 2017, Martin watched as Islamic State terrorists outfitted small commercially developed drones with grenades and other munitions to kill and maim the Iraqi troops he was responsible for training.

“ISIS took off-the-shelf [unmanned aerial systems,] weaponized them and used them very effectively against the Iraqis,” Martin recalled. “And so we had to come up with some solutions. And we did.”

Now, the Army must look to give its soldiers the best chance to defend themselves against much more advanced threats, much like the United States military uses against its own enemies including airplane-size drones with advanced, guided missiles.

In a training scenario described by officials at Kord’s headquarters, radar on the DE M-SHORAD detects an enemy drone about 8 kilometers in the distance. The laser locks onto the drone, tracking it as it moves closer to the vehicle. When the DE M-SHORAD detects incoming mortar fire, the laser quickly moves to intercept the incoming rounds and fires, instantaneously sending heated energy at the round, which is destroyed in seconds. The laser then returns to the drone, destroying it several seconds later.

“We’ve got a target acquisition system that can sense and lock on and then strike a moving mortar round ... an unmanned aerial system and other aircraft with energy sufficient to the point that it will penetrate and disrupt that particular munition or platform’s ability to accomplish its mission. That’s an incredible power to have,” Martin said. “That is the kind of capability we have to have, and it demonstrates our ability to respond to the world around us with technology.”

New weapons, rapid paceMartin and other Army leaders warn that if the Army cannot produce dramatic changes to its weaponry in the coming years it will find itself outgunned by the battlefield technology under development in China and Russia.

The Pentagon between fiscal years 2017 and 2019 boosted its funding on directed energy programs from $535 million to more than $1.1 billion. In addition to Army efforts, the Air Force and Navy are also developing directed energy weapons, including the Navy’s Optical Dazzling Interdictor-Navy, or ODIN, program, an anti-drone high-energy laser outfitted on three Arleigh Burke-class guided-missile destroyers for testing.

The Army tasked its Rapid Capabilities and Critical Technologies Office, or RCCTO, headquarters at Redstone with leading the efforts to bring directed energy and other newly emerging but high-priority capabilities, including hypersonic weapons, to soldiers. Martin said the office has a track record of taking requests from the commanders leading troops in combat and quickly filling capability gaps, like the drone threat presented by ISIS.

The general believes the Army will have to constantly update its weaponry — through updated software — to keep up with the increasing pace of technological changes. Adversaries will look to exploit any perceived gaps in soldiers’ abilities to defend themselves.

“It never ceases to amaze me the work that the Rapid Combat Capabilities and Critical Technologies Office does to deliver capability on a short timeline,” Martin said. “We’re going to have to get really good at this.”

In August 2019, RCCTO granted Kord a contract for more than $200 million to build the DE M-SHORAD prototype, which could increase to a $490 million contract if the Army buys four prototypes next year.

That system, fielded by the Ansbach-based 5th Battalion, 4th Defense Artillery Regiment, was meant to quickly fill air defense gaps in Europe as the U.S. and NATO face off with a more aggressive Russia. The missile-armed M-SHORADs are expected to be fielded to five air defense battalions later this year. Martin said the Army had yet to determine who would receive the laser-outfitted Strykers, but RCCTO officials said they would complement the M-SHORADs and not replace them.

Why lasers?In scenarios Kord and the RCCTO have run where the DE M-SHORAD detects multiple threats — ​including the one briefed during Martin’s recent visit where an enemy drone is located shortly before an incoming mortar strike is sensed — laser weapons have been able to lock on and destroy enemy threats in less than 20 seconds, demonstrating one of the most critical advantages: speed.

“The mortars are the more emergent threat” in the scenario, said Craig Robin, who heads the RCCTO’s directed energy project office at Redstone. “So I engage that threat and then I go back to the [unmanned aerial vehicle] and I engage it. And that type of military utility is adding decision space for commanders on the battlefield.”

Kord officials, explaining how the laser works to Martin, described it like a blowtorch, heating its target with invisible infrared light until it explodes.

Lasers can find and destroy targets much faster than traditional weapons because they operate at the speed of light, said Wes Freiwald, vice president for Kord’s parent company KBR, who oversees its directed energy programs including DE M-SHORAD. Unlike air defense systems that launch a missile to destroy an incoming threat, the laser allows the operator to know if it hit its target immediately and to destroy in seconds instead of the several minutes it can take with older technology.

“You can tell if you’re hitting it almost instantaneously,” Freiwald said. “And that in and of itself is a significant improvement over [traditional weapons] where you launch and wait. Launch and hope.”

Lasers also offer other benefits, Robin said. The DE M-SHORAD is self-contained, meaning everything needed to operate and fire the system exists on the platform. Its only requirement is gas, which powers the eight-wheeled vehicle, its computer systems and the laser.

Robin said that would be a huge logistical advantage for the Army.

“Think about a missile: I have got to make the missile, I have to maintain it, I have got to carry it to the battlefield. I have got to store it, and if I don’t use it, I have got to decommission it,” Robin said. “That laser system — we need gasoline and we need spare parts for our system, right? That’s the entire logistics burden.”

And it is the entire cost, he added, saying an engagement with the 50-kilowatt high energy laser uses “cups of gasoline” versus the cost of a missile to destroy an enemy threat. For example, the Stinger missiles that the M-SHORADs fielded last month by U.S. soldiers in Germany can cost $38,000 per round.

“I think that puts laser technology, directed energy technology, on the right side of that cost curve,” he said.

Don’t expect laser-shooting blasters or lightsaber-style weapons a la Star Wars anytime soon, said Robin, who explained the lasers under development by the U.S. military — including those that could eventually boast more power than the DE M-SHORAD’s 50 kilowatt laser — are “purely defensive weapons.”

Laser technology, as it exists, is not especially effective against human targets, he said.

“We’re clearly never intending to engage in people with a laser weapon,” Robin said. “It is not a good counter-personnel weapon. … Bullets are way more effective.”