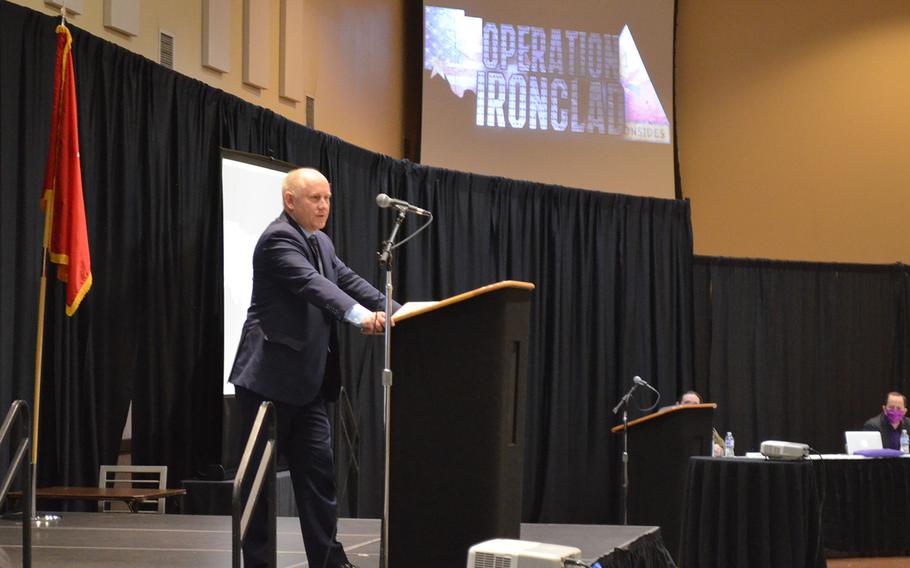 Buy Photo
Acting Army Secretary John Whitley on Thursday, March 11, 2021, told battalion command teams at Fort Bliss, Texas, it is their responsibility to set an environment in their units to build cohesive, winning teams that are free of sexual assault and harassment. (Rose L. Thayer/Stars and Stripes)

Buy Photo
Acting Army Secretary John Whitley on Thursday, March 11, 2021, told battalion command teams at Fort Bliss, Texas, it is their responsibility to set an environment in their units to build cohesive, winning teams that are free of sexual assault and harassment. (Rose L. Thayer/Stars and Stripes) 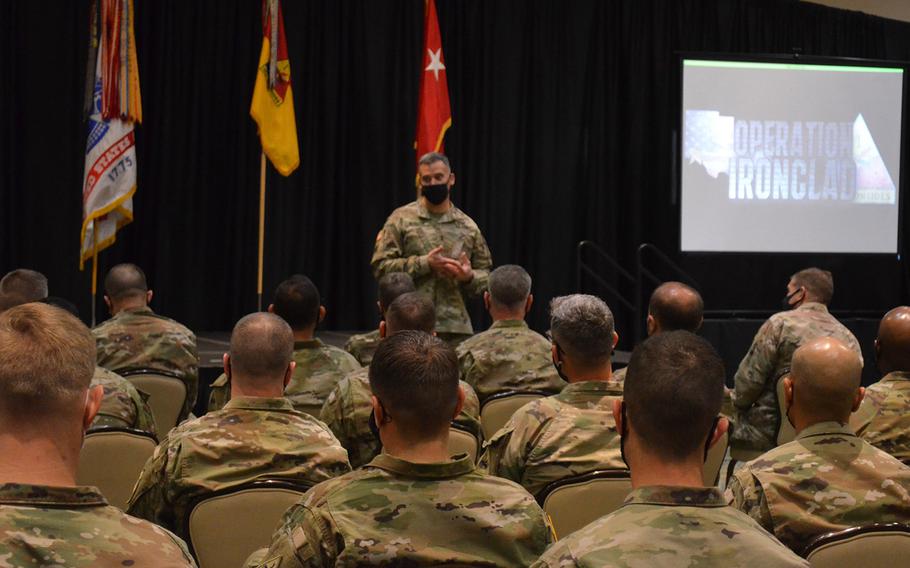 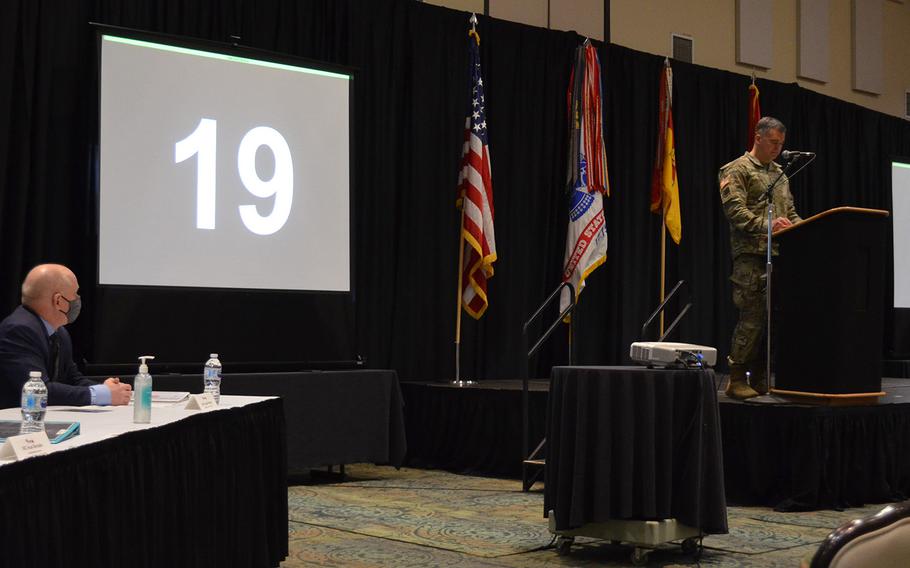 Buy Photo
In the past 30 days, 19 soldiers at Fort Bliss, Texas, reported being sexually assaulted either on or off base, said Maj. Gen. Sean Bernabe, commander of the 1st Armored Division and Fort Bliss, during an event Thursday, March 11, 2021, to encourage battalion command teams to take action to prevent sexual assault from occurring in their units. (Rose L. Thayer/Stars and Stripes)

FORT BLISS, Texas — If Army commanders cannot get sexual assault and harassment in the ranks under control, legislation is looming in Congress that will change the ability of military leaders to oversee cases and could bring “unwarranted consequences,” acting Army Secretary John Whitley said Thursday.

“The Army has to move the needle now,” he told commanders gathered at the base. “It’s about soldiers, it’s about readiness, it’s about being ready for the next war. It’s about what kind of Army we have.”

The legislation that he referenced is the I Am Vanessa Guillen Act, which would take the decision of whether to prosecute a sexual assault or harassment case away from the chain of command and move it to a prosecutor’s office within each military service. It is named to honor Spc. Vanessa Guillen, a soldier who was killed last year at Fort Hood by another soldier. Guillen’s family has said her killer had sexually harassed her, but she was too afraid to bring the harassment to her leadership.

“It’s a very well-meaning proposal, but it could have potentially unintended consequences,” Whitley said. “What you do and the reasons you make those prosecution decisions are about shaping your units and doing the right thing. We are going to have to show results if we want to keep the tools that we have available to us in our toolkit.”

Last year, about 6,500 sexual assaults occurred in the Army but just more than half were reported, he said. The number of cases must come down and reporting must go up, he said. When it happens, victims must feel cared for and safe.

Now, the Army’s prosecution rates for sexual assault are higher than in civilian cases, Whitley said. While that must remain the case, the service also has to prevent incidents from occurring. The way that Fort Bliss is tackling the issue is exactly “the types of initiatives we are trying to implement across the entire Army,” he said.

Whitley spoke to about 150 battalion and brigade commanders and command sergeants major gathered in person at a Fort Bliss event called Ironclad Summit, an all-day conference meant to inspire leaders on how to combat sexual assault and build cohesive winning teams, said Maj. Gen. Sean Bernabe, commander of Fort Bliss and the 1st Armored Division. It is part of an overall initiative, Operation Ironclad, that aims to rid the base of sexual assault, extremism and suicide. The three behaviors were identified by the Army as corrosive to readiness.

Through the initiatives, the base, which has about 25,000 active-duty soldiers, has reorganized its military police protocols to ensure that military protective orders filed by victims to prohibit contact from the alleged perpetrator are entered immediately into the base system as well as with civilian law enforcement. They’ve made certain that all units provide their sexual assault representative with access to a vehicle 24-7 in case they need to drive a victim to the hospital, and the base is opening a second courtroom to expedite a backlog of cases, Bernabe said.

Thursday’s event was designed to inspire action while also acknowledging the problem directly, he said. Many conversations throughout the day were uncomfortable, but Bernabe said it was necessary to help commanders find their way to contribute to “positive disruption” on base.

“This fratricide must stop. We must strengthen the cohesiveness of teams so that our soldiers protect each other,” he said. “We must confront those who denigrate our teams through action or inaction.”

In the last 30 days, 19 soldiers at the west Texas base have reported a sexual assault, Bernabe said.

“I wonder how many of our teammates were too afraid to report,” he said.

Each commander in attendance received a card on which they were asked to write concrete actions that they planned to take to combat corrosive behavior. Bernabe said commanders must keep the card with them from now on and be ready when asked to explain their proposals to him.

Because the majority of victims of sexual assault in the Army are between the ages of 18 and 24 and at the rank of specialist and below, Whitley said battalion commanders are in a critical position of pushing initiatives and training down to the lower levels.