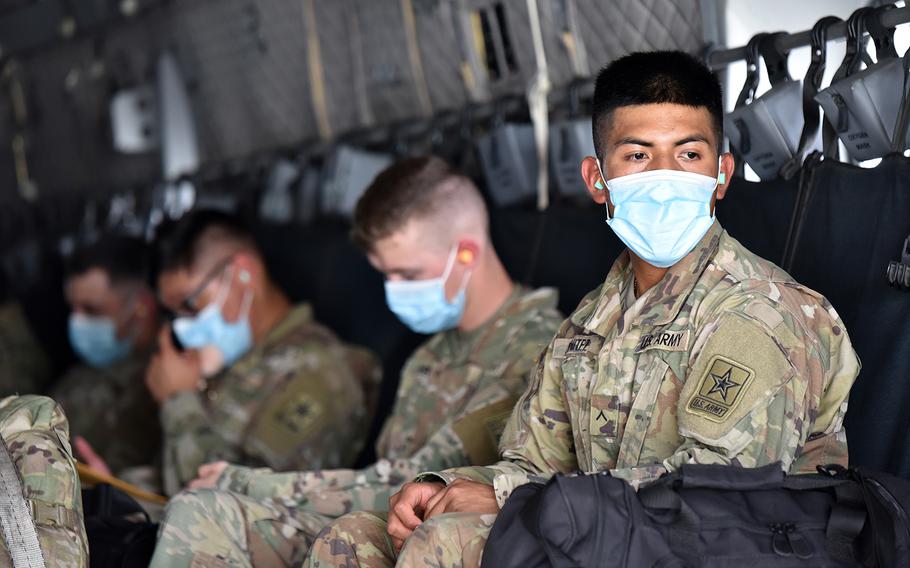 A soldier looks out of the loading ramp of a C-27 aircraft while he and his fellow soldiers wear face masks and maintain social distance. The soldiers were transported in controlled air and ground movements to their next duty of assignment as an exception to the Department of Defense movement stoppage enacted to curb the potential spread of the 2019 Coronavirus Disease, or COVID-19. (Jose Rodriguez/U.S. Army)

WASHINGTON — The Army believes many of the service’s large fighting formations can return to critical, high-level training exercises in the coming weeks at their home stations and the service’s combat training centers, senior service officials said Thursday.

The Army has developed a rough framework meant to guide commanders through the processes of safely returning to field training operations across the force, Army Secretary Ryan McCarthy said Thursday in a news briefing from the Pentagon. Defense Secretary Mark Esper was briefed recently about the framework for his approval and the plan could be finalized soon, McCarthy said.

“The Army continues to need a manned-and-ready force,” he said.

Ultimately, the decisions to return to large-scale training exercises for battalion- and brigade-sized units at their home stations will be left to those formations’ commanders, according to a senior Army official. The official spoke on condition of anonymity to describe the plan before it is finalized and announced publicly.

The Army wants local commanders to understand the risks of coronavirus infections to their troops and have plans in place to monitor soldiers’ health before beginning any training exercises. Commanders also must have plans to procure testing supplies quickly and to test widely in units if outbreaks are suspected, the official said. Commanders should have an understanding on the virus’ impact on their installations and neighboring communities within about 60 miles of their posts before returning large units to the field.

Commanders are expected to take similar precautions as Army officials have with recruits at basic training locations — isolating units together to move into and out of training exercises, implementing social distancing measures when possible, and mandating the use of face masks, the official said.

The Army has varying testing capacities at its installations. While all major installations have some ability to test for the virus, those range from the capacity to conduct about one dozen per day to other bases that can conduct nearly 1,000 per day, such as Fort Jackson, S.C., the service’s largest initial-entrance-training site, officials have said.

Gen. James McConville, the Army chief of staff, said Thursday that the service simply cannot wait out the pandemic or continue halting most training until all its soldiers can be tested. Soldiers still must deploy to combat zones in places such as Iraq and Afghanistan and continue preparations for the Pentagon’s primary mission to deter hostility from competitors such as China and Russia.

“Getting back to collective training is crucial,” McConville said. “It’s not going to be a one-size-fits-all solution. We’re looking at the long game. We’re not waiting for [the coronavirus] to go away.”

As of Thursday, 1,646 soldiers across active-duty, Reserve and National Guard units had tested positive for the virus, including 525 who have recovered, according to the Army. One soldier, a New Jersey National Guard officer, died of complication of the coronavirus.

McConville visited Fort Polk, La., this week to meet with officials who run that post’s Joint Readiness Training Center, one of the Army’s two major training locations in the continental U.S., where brigade-sized units rotate in and out every month to test their combat skills. Those rotations to the JRTC and the service’s National Training Center at Fort Irwin, Calif., often serve as mission rehearsals for combat or deployments to areas such as Europe or Africa.

Those two training ranges were closed down in March as part of the military’s efforts to thwart the virus’ spread, resulting in the cancelation of planned rotations for four brigades. The senior Army official said those brigades were expected to make up those rotations in the future, and the next training rotations set to begin in June are expected to be held.

The official played down the impact on the Army’s overall combat readiness caused by the pause in large training operations at the JRTC, the NTC and other locations throughout the world. Small-unit tactical training has continued at home stations in many places, the official said.

“Things did slow down,” the official said. “But there are varying states of training going on across the Army. The Army never stopped.”

Among the units set for a June rotation to a combat training center is the 4th Security Forces Assistance Brigade from Fort Carson, Colo., which is to train at the JRTC to prepare for a deployment to Afghanistan in the summer. The JRTC rotation is critical for that new unit of 800 soldiers specially trained to advise and assist Afghan forces.

It was unclear Thursday whether the unit could be certified for deployment without completing that training.

But top Army officials do not believe that will become an issue. McConville on Thursday noted that while areas in Louisiana, including New Orleans, had experienced large outbreaks of the virus, the area around Fort Polk had not. The post, about 220 miles northwest of New Orleans, is located in a largely rural area near the town of Alexandria.

“We’re going to live in the [coronavirus] world for a while,” the general said. “We have to train, and that’s why we’re putting these safety procedures in place.”