Army charges 8 in Afghanistan in death of fellow U.S. soldier 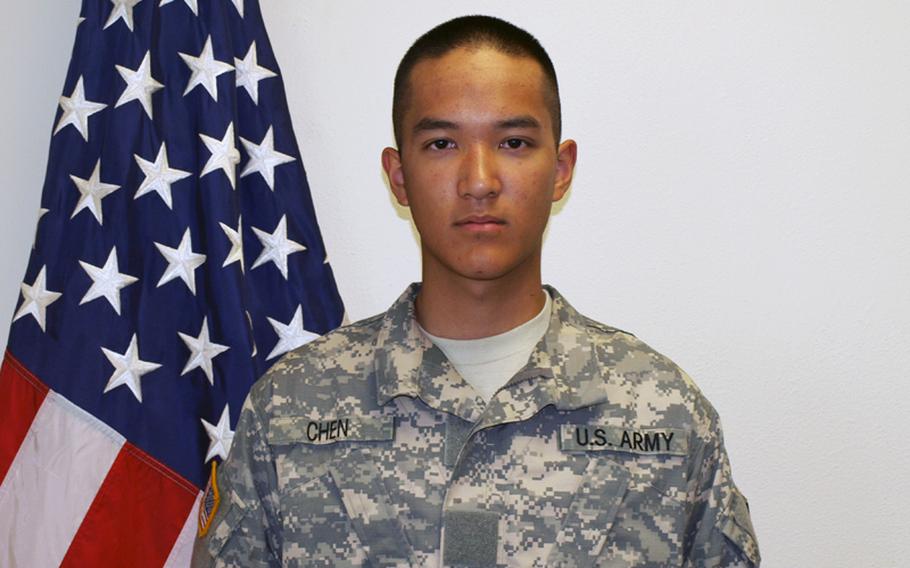 Eight U.S. troops are facing charges including involuntary manslaughter and negligent homicide in the death of Pvt. Danny Chen, 19, who was found dead of &ldquo;an apparent self-inflicted gunshot wound&rdquo; in a guard tower in Afghanistan in October, the U.S. military said Wednesday.

Chen&rsquo;s case became a major news story in New York after family members alleged he had been hazed before his death because of his Chinese ethnicity. An Army official told the family that Chen had been beaten by superiors and subjected to racially motivated taunts, according to an October story in The New York Times.

&ldquo;After two months of agonizing over the loss, it is of some comfort and relief that the Army is taking this seriously,&rdquo; Chen&rsquo;s mother, Su Zhen, said through an interpreter at a news conference Wednesday in New York, according to an MSNBC report.

Last week, hundreds of supporters took to the streets of Lower Manhattan to demand that the Army take action, and news of the military charges quickly led the stories on the websites of most major New York City news organizations.

ISAF spokesman Sgt. 1st Class Alan Davis said via email from Afghanistan that &ldquo;the charges relate to conduct that occurred in the time leading up to [Chen&rsquo;s] death.&rdquo;

* Staff Sgt. Blaine G. Dugas, charged with violation of a lawful general regulation, dereliction of duty, and making a false official statement; and

&ldquo;The soldiers are still in Afghanistan and have been assigned to a different [forward operating base], in southern Afghanistan, where the incidents occurred and removed from their duty positions,&rdquo; Davis said. &ldquo;They are under increased supervision.&rdquo;

The charges come amid intense concern over military suicides. By the end of November, 154 active-duty soldiers had taken their own lives, and both the Army and the Marines have had high-profile suicide cases involving hazing in 2010 and 2011.

A month before Chen&rsquo;s death, Lance Cpl. Harry Lew killed himself in Afghanistan after being berated and assaulted by three Marines, according to charges filed in that case. Earlier this year, Stars and Stripes also brought light to a hazing-related suicide from 2010. An investigative report last summer found that Spc. Brushaun Anderson shot himself in a portable toilet after enduring &ldquo;cruel, abusive and oppressive treatment.&rdquo;

Anderson&rsquo;s leaders, who were deemed responsible for the maltreatment by the Army&rsquo;s investigation, were essentially let off with a slap on the wrist.

Separately, The Washington Post reported that the Chinese-American advocacy group called OCA has been working with Chen&rsquo;s family and that Liz OuYang, president of the group&rsquo;s New York chapter, had met with Pentagon officials last week to push for more serious focus on soldier mistreatment, and especially on weeding out racist attitudes and soldiers with racist tendencies.

&ldquo;Whether suicide or homicide, those responsible for mistreating Danny caused his death and they must be prosecuted to the fullest extent of the law,&rdquo; OuYang said at Wednesday&rsquo;s news conference.

&ldquo;This is just the beginning,&rdquo; Vel&aacute;zquez said. &ldquo;We won&rsquo;t rest until the truth comes out and those involved are held accountable.&rdquo;