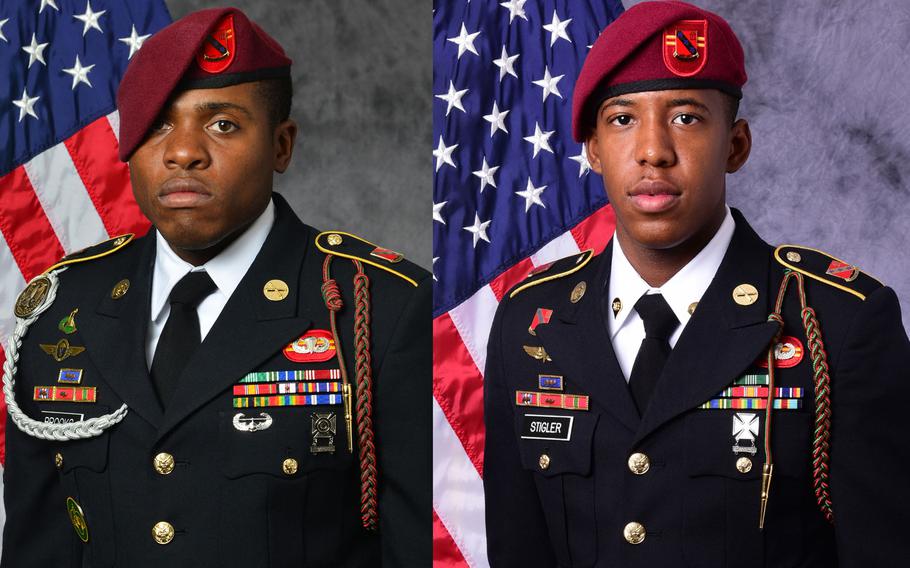 WASHINGTON — An Army sergeant from New York City on his second combat deployment and a specialist from Texas on his first were identified by the Pentagon late Monday as the artillerymen killed in an explosion in northern Iraq.

Sgt. Roshain E. Brooks, 30, and Spc. Allen L. Stigler Jr., 22, were killed Sunday when a round that they were firing at an Islamic State mortar position blew up, according to the Pentagon. Five other soldiers from their cannon crew were injured in the incident, but they are expected to survive, said Army Col. Rob Manning, a Pentagon spokesman.

Brooks and Stigler deployed to Iraq in January from Fort Bragg in North Carolina, according to the Army. They were assigned to the 2nd Battalion, 319th Airborne Field Artillery Regiment, 2nd Brigade Combat Team, 82nd Airborne Division, which has spent most of 2017 conducting artillery operations against ISIS militants, primarily to back Iraqi forces as they drove the terrorist group from its former stronghold of Mosul.

Both soldiers were due home next month.

Their brigade commander, Col. Pat Work, called them “courageous patriots,” saying they served with an “extraordinary commitment” to the mission to defeat ISIS.

“Our team extends its most sincere condolences to their families and friends,” he said in a statement. “Their personal commitments to our campaign against ISIS were extraordinary, and we are incredibly proud to have served with them.”

Manning characterized the deadly incident as a mishap that is under investigation. Pentagon spokesmen said Tuesday that they had no additional information about the incident.

A defense official said Brooks and Stigler were killed when a 155mm artillery round blew up inside the tube of the M777 howitzer that they were firing.

Brooks and Stigler were posthumously awarded the Bronze Star, the Purple Heart, the Meritorious Service Medal and the Combat Action Badge, according to an Army statement.

Brooks was from Brooklyn and joined the Army in July of 2012. He was initially assigned to Fort Hood in Texas from where he served a deployment to Afghanistan from June to November of 2014, according to the Army. He joined his unit at Fort Bragg last year.

Stigler, who was posthumously promoted to sergeant, was from Arlington, Texas, according to the Army. He enlisted in the Army in 2013 after graduating from Mansfield Timberview High School.

Stigler initially was assigned to the 2nd Infantry Division and served at Camp Casey in South Korea from May 2014 through June 2015. He then joined the 82nd Airborne and was serving his first combat deployment, according to Army records.

With the deaths of Stigler and Brooks, nine American servicemembers have died in Iraq in 2017, including non-combat deaths. At least two others have died in combat-related incidents, including another member of the 82nd Airborne. First Lt. Weston Lee was killed by an improvised bomb near Mosul in April.