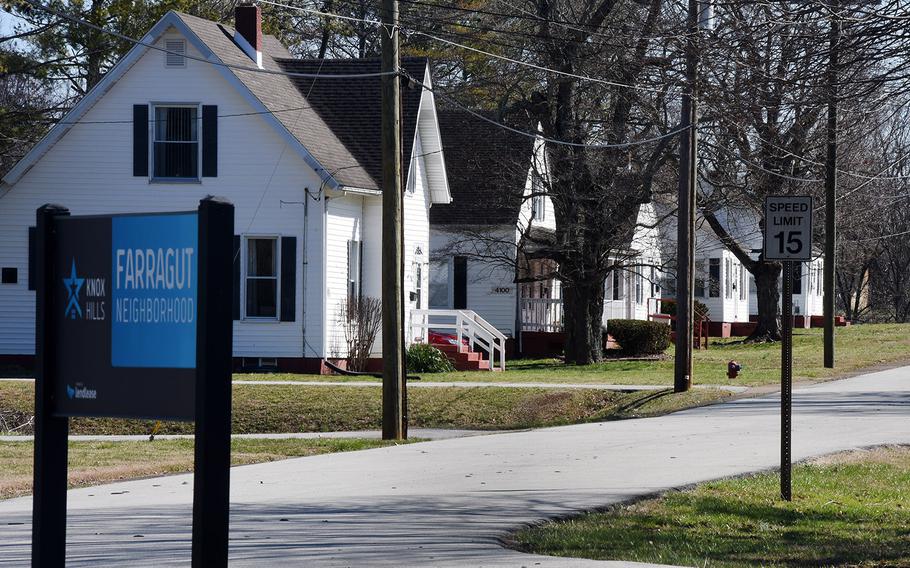 A housing area at Fort Knox, Ky. Fort Knox is one of six bases that will benefit from $1.1 billion being invested in improving military housing. (Eric Pilgrim/U.S. Army)

AUSTIN, Texas — The Army on Wednesday announced $1.1 billion will be invested in improving military housing by a company that manages residences at six bases across the country.

Lendlease, a company that manages housing at Fort Hood, Texas, Fort Campbell and Fort Knox in Kentucky, Fort Wainwright, Alaska, Fort Drum, N.Y., and Army housing in Oahu, Hawaii, will use the money that it has obtained from lenders to accelerate plans to revitalize or build about 14,000 homes at the bases.

The new injection of funds will speed up renovation plans by more than a decade, the company said.

Under its contract with the Army, Lendlease is responsible for the management and sustainment of about 26,000 homes, which it leases to service members at a rate that does not exceed their basic allowance for housing.

“Under the guidance of Army senior leaders to ensure readiness of our force and quality of life for soldiers and their families, we have reached an extraordinary milestone with Lendlease,” said Gen. Ed Daly, commander of Army Materiel Command, which oversees base housing for the service. “This additional investment will go a long way in improving the quality of homes for soldiers and their families.”

The $1.1 billion investment will fund “significant improvements” to 12,000 existing homes at all six bases and the construction of more than 1,200 new homes at Fort Hood, Fort Campbell, Fort Knox and Fort Wainwright, the Army said.

Specific improvements vary by base and include new home construction, major exterior and interior renovations, as well as demolition of outdated homes, Lendlease said. Work should begin in the spring.

“We stand committed, alongside our Army partners, to continue improving the quality of life for service members and their families now and into the future,” said Denis Hickey, CEO of Lendlease Americas. “Thanks to privatization and our innovative approach to financing, we’re able to expedite our improvement plans, allocating funds to projects based on those with the greatest needs and priorities, without appropriations from Congress.”

Fort Hood will get a significant portion of the total investment, the Army said.

Lendlease, which manages more than 5,600 homes at Fort Hood, is now repairing the exteriors of 972 houses at the Texas base that are known to have a flaw that can cause water leaks. Work began in July and 137 homes have been completed, according to the company’s website. All those repairs should be finished by the spring 2022.

The Army said it had previously approved the efforts of other privatized housing companies to secure investments to fund the development and renovation of more than 3,500 homes and replacement of more than 800 other homes. Details on the locations of those projects were not provided.

“We are getting in front of housing issues,” Daly said. “Commanders at all levels are engaged. Our leaders and housing staffs continue to address problems quickly. The feedback loops – such as web-based apps, installation town halls and help-desk lines to ensure our residents can quickly identify and report problems – are working. Leaders and housing company personnel are responding quickly, and we are seeing significant results.”

The military housing crisis drew national attention more than two years ago when Reuters published a series of reports on dangerous conditions some military families face when they lease homes on bases across the country. Since then, Congress has held hearings and passed legislation to combat to list of problems that families presented, including exposure to lead paint, asbestos and mold, pest and rodent infestation, water leaks and a lack of timeliness and proper handling of maintenance requests. The military service branches have also identified ways to improve oversight of contracts.

At least nine lawsuits have been filed against the companies that mange on-base family housing, with one filed as recently as December. There are at least two lawsuits pending against Lendlease for housing conditions at Fort Hood and Camp Lejeune, N.C. The Fort Hood suit has moved to pending arbitration.