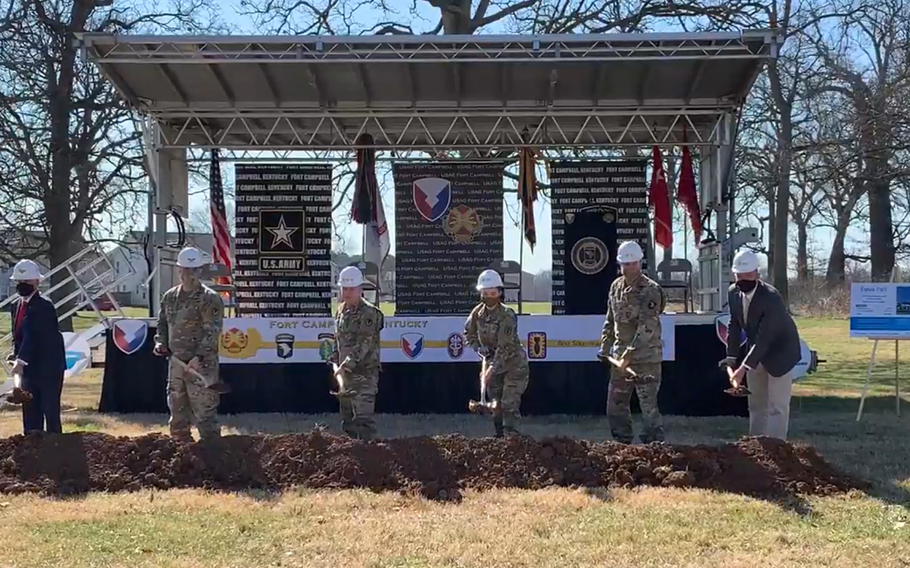 Officials from the Army and Lendlease on Thursday, March 4, 2021, mark the first of two housing projects that will build or renovate about 1,200 homes at Fort Campbell, Ky., Construction will continue for the next five to 10 years and focus on housing for junior enlisted personnel. (Fort Campbell)

AUSTIN, Texas — One in every four families living at Fort Campbell, Ky., will have a new or renovated house within the next five to 10 years based on plans by the Army and the base housing company.

The first of two military housing projects, which are estimated to cost about $320 million, began Thursday. The project stands as an example of the Army’s priority to care for people, said Lt. Gen. Douglas Gabram, commander of Army Installation Management Command, which oversees base housing for the service.

“This is a huge step in taking care of our soldiers and families,” he said. “The collaboration and the partnership with [privatized housing companies] is evident here today. It’s about quality homes and quality renovations, and you’re going to see that in near future.”

The first project, valued at $87.4 million, focuses on housing for junior enlisted soldiers and will build 144 new homes, renovate 177 homes and demolish 250 homes during the next five years. The groundbreaking on Thursday of new homes in a new neighborhood, Erevia Park, marked the beginning of construction.

The homes to be renovated are in Hammond Heights. The houses to be demolished will begin in LaPointe Village after construction is complete and families can be moved to new housing, said Phillip Carpenter, chief operating officer at Lendlease Communities, the parent company for Campbell Crossing, which manages housing at the base.

The second phase of the project has yet to be fully announced, but plans call for about 500 new homes and renovations to about 400 old homes at a cost of $233 million, according to Lendlease. The funding is part of a $1.1 billion investment that the company received that will allow it to speed up planned projects at six bases by more than 10 years.

About 14,000 homes will be built or renovated by the funding, and the other bases included are Fort Hood, Texas, Fort Knox, Ky., Fort Wainwright, Alaska, Fort Drum, N.Y., and Army housing in Oahu, Hawaii. Plans are set to be announced for these projects in the coming months, Lendlease said.

In total, the company manages about 4,400 homes at the base and about 26,000 throughout the Army.

Construction started this week on three- and four-bedroom houses. To design the homes, Lendlease and the Army said they solicited feedback from residents on what is important to them. Residents asked for open floor plans, open kitchens and garages instead of carports, Gabram said.

Designs were created with professional licensed and certified architects, then presented to the Army for final review, Carpenter said.

Residents “have been instrumental in the decision-making process to ensure our resources address the communities greatest needs,” he said. “We pride ourselves in going above and beyond to solicit feedback, engage with our community and implement suggestions.”

All neighborhoods at Fort Campbell are named to honor Medal of Honor recipients, and the new community will honor Sgt. Santiago J. Erevia, who received the medal for actions in May 1969 while deployed to Vietnam with the 101st Airborne Division, said Maj. Gen. Brian Winski, the division commander.

“I’m incredibly proud to have something named in Erevia’s honor,” he said.

Winski said he began meetings between the base, the Army and Lendlease about two years ago to secure the $87.4 million for the house construction that begins this week.

“We knew we wanted to generate more quality housing for junior enlisted soldiers,” he said.

That timing coincides with the release of a Reuters investigative series on the poor condition of some military housing. Since then, Congress has held hearings and passed legislation to combat the list of problems that some military families have faced, including exposure to lead paint, asbestos and mold, pest and rodent infestation, water leaks and a lack of timeliness and proper handling of maintenance requests. The military service branches have also identified ways to improve oversight of contracts.

Three housing companies, including Lendlease, will send officials to Washington next week to provide an update on reforms to a joint hearing of the House Armed Services Committees subpanels on military personnel and readiness.