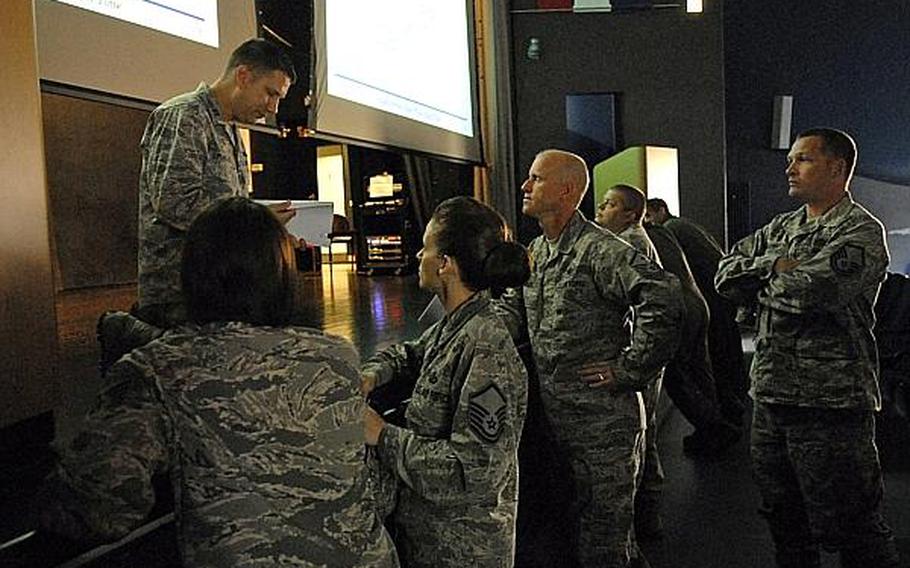 Buy Photo
Capt. Scott Simoneaux, commander of the military personnel flight at Ramstein Air Base, answers questions from airmen July 30, 2013, about programs the Air Force is using to help cut about 1,800 airmen in 2014. Most of those measures are voluntary, including the fiscal 2014 Temporary Early Retirement Authority, which gives eligible airmen with 15 to 19 years of service the opportunity to apply for early retirement. (Jennifer Svan/Stars and Stripes)

Of those approved to retire early under the Temporary Early Retirement Authority, there were 311 enlisted and 47 officers, according to information from Michael Dickerson, a spokesman for the Air Force Personnel Center.

Officials would not say how many applications they received, but in an email Dickerson said the Air Force approved all applicants that met TERA’s eligibility criteria.

The program was open to technical sergeants, master sergeants, captains, majors and lieutenant colonels with between 15 and 19 years of service in most career fields.

The military rank of the majority of applicants approved — 201 — were technical sergeants, according to Dickerson. There were also 110 master sergeants, 31 majors, eight captains and eight lieutenant colonels.

Air Force officials said this summer that the service needs to cut about 1,860 airmen by the end of next fiscal year to meet its congressionally-required active-duty end strength of 327,600. Most of the separation measures the Air Force has rolled out so far this fiscal year to help shrink force size have been voluntarily. But the Air Force has already announced that some lieutenant colonels and full colonels will face selective early retirement boards in December.