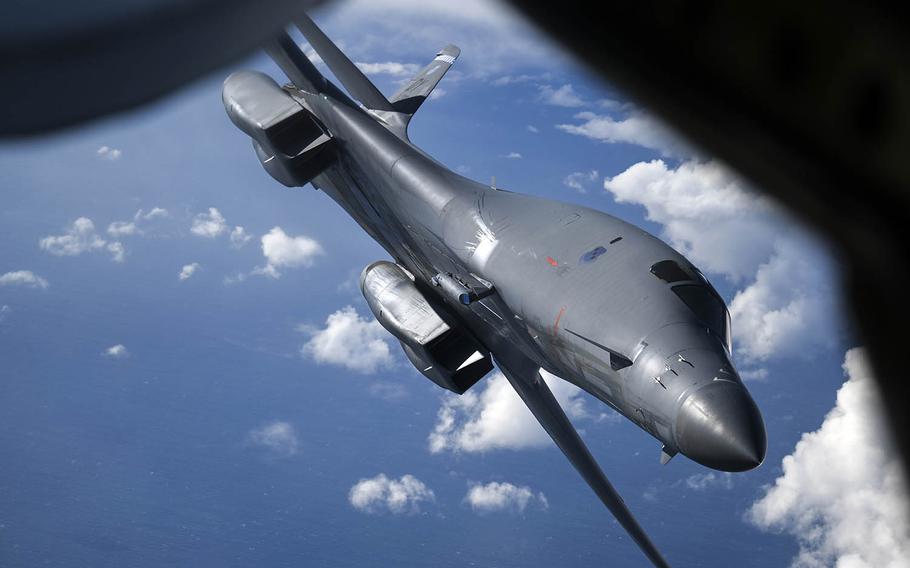 An Air Force B-1B Lancer bomber assigned to the 7th Bomb Wing flies away from a tanker after aerial refueling off the coast of Scotland, April 12, 2021. (Emerson NuÃ±ez/U.S. Air Force)

Some B-1B Lancer bombers began flying again Monday after the entire fleet was grounded for two weeks to inspect problems with the fuel system following a ground emergency last month at Ellsworth Air Force Base, S.D.

The bombers will return the air as inspections and maintenance arising from the stand-down are completed, the Air Force said in a news release Thursday.

Gen. Timothy Ray, commander of the Air Force Global Strike Command, ordered the safety stand-down on April 20 after inspectors found a “discrepancy” in the fuel pump on the B-1B involved in the emergency, the Air Force said.

“After further analysis, the commander stood down the fleet because it was determined a more invasive inspection was needed to ensure the safety of aircrews,” the strike command said in a statement when the stand-down was ordered.

“After each unit was determined to be free of defects, it was reassembled, pressure checked, and returned to service,” according to the service.

Maj. Gen. Mark Weatherington, who as commander of 8th Air Force is responsible for the service’s bomber fleet, implied in the statement that no systemic or universal problems were found in the Lancers.

“The aircraft are still safe to fly, and we are confident that this stand-down has resulted in increased safety within the B-1B fleet,” he said in Thursday’s statement.

The Air Force has ordered safety stand-downs for B-1B twice before in recent years.

In May 2018, a B-1B assigned to Dyess Air Force Base in Abilene, Texas, was forced to make an emergency landing at nearby Midland. The ejection seat malfunctioned during the emergency, prompting the Air Force to ground the bombers for two weeks to inspect all ejection seats.

All 62 Lancers in the fleet were grounded again in March 2019 for almost a month after a routine inspection found potential safety problems in the parachute used in the aircraft’s ejection system.

The Air Force has employed the Boeing B-1B for about 30 years, including combat in Iraq and Afghanistan. They have frequently deployed to Andersen Air Force Base on Guam in recent years as part of Indo-Pacific Command’s Bomber Task Force.

The aging fleet is expected to be entirely replaced by the B-21 Raider bomber by the end of this decade.