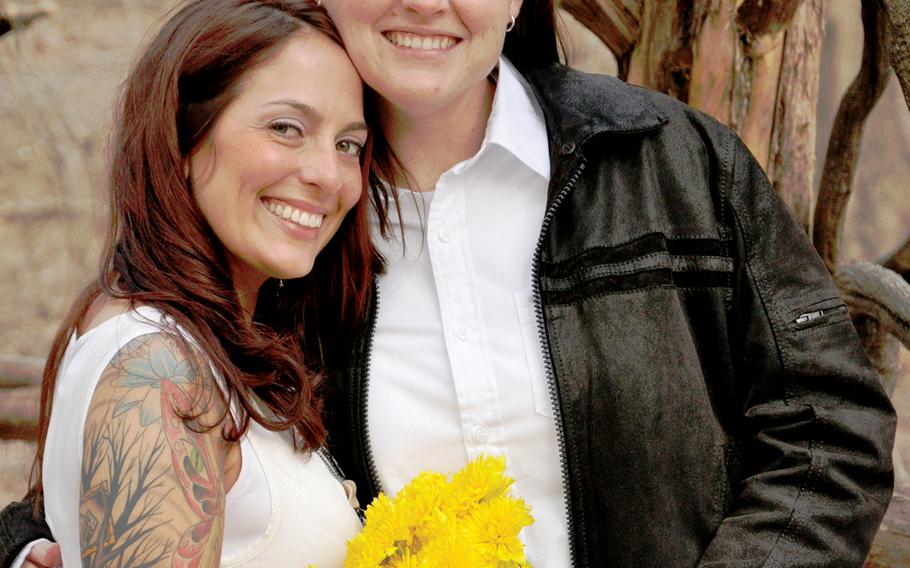 Air Force Master Sgt. Angela Shunk, left, and Tech. Sgt. Stacey Shunk, married in March in New York City's Central Park. The couple wants to start a family but faces an uncertain future together, since the Air Force won't allow them to apply to a program that tries to match military spouses with assignments at the same location. A federal law prevents U.S. government entities from recognizing the legal marriages of same-sex couples. (Courtesy of Angela Shunk)

Air Force Master Sgt. Angela Shunk, left, and Tech. Sgt. Stacey Shunk, married in March in New York City's Central Park. The couple wants to start a family but faces an uncertain future together, since the Air Force won't allow them to apply to a program that tries to match military spouses with assignments at the same location. A federal law prevents U.S. government entities from recognizing the legal marriages of same-sex couples. (Courtesy of Angela Shunk) 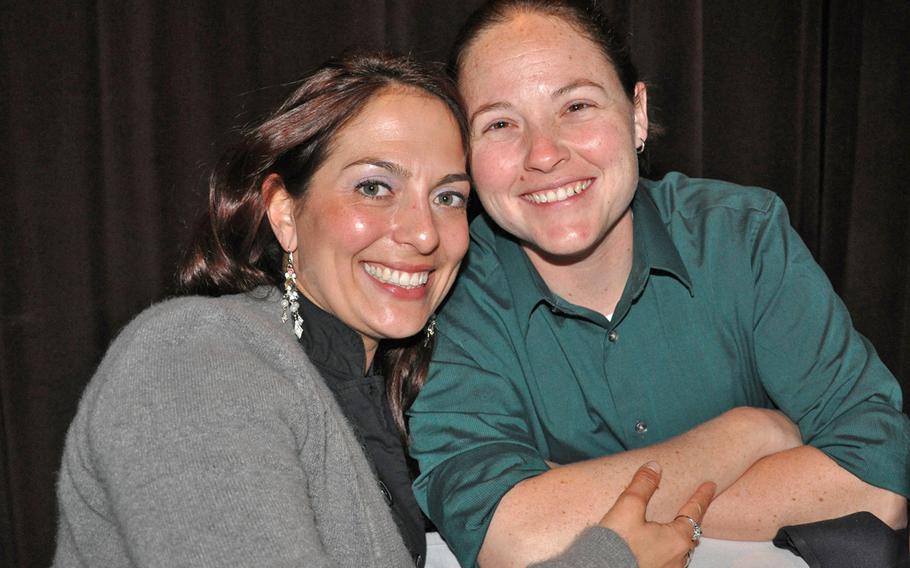 Air Force Master Sgt. Angela Shunk, left, and Tech. Sgt. Stacey Shunk are the first Air Force same-sex couple to be accepted for an assignment under the service's Join Spouse program. The Shunks, currently assigned to Aviano Air Base, Italy, will be assigned to Hill Air Force Base, Utah. The Shunks' application for join spouse consideration was approved Sept. 3rd, the same day the Pentagon made available a range of federal benefits to same-sex spouses of military members. (Courtesy of Angela Shunk)

KAISERSLAUTERN, Germany – With a sense of dread, Air Force Master Sgt. Angela Shunk imagined what it would feel like when, come November, she and her wife departed Italy and headed to separate bases and separate lives, thousands of miles apart.

It would mean delaying starting a family and force a difficult choice for one of them: Stay in the Air Force and live apart or give up one’s military career to be together.

“It was scary,” Angela Shunk said. “We’d be going to two different places, not because there wasn’t a place we could both go but because they couldn’t even consider us for that joint assignment.”

As it turned out, the Air Force had a place for two Shunks. All it took for the couple to get orders to the same base was a historic court ruling for gay rights.

Less than three months after the U.S. Supreme Court struck down the Defense of Marriage Act, Angela Shunk, 33, and her wife, Tech. Sgt. Stacey Shunk, 32, learned that the Air Force, after earlier denying their repeated requests for join spouse consideration, was sending them both to Hill Air Force Base, Utah, for their next assignment.

The decision makes the Shunks the first same-sex couple in the Air Force to receive an assignment together under the service’s Join Spouse program since the high court in June struck down the 1996 federal law that defined marriage as a union only between a man and a woman.

Their application for a joint assignment was accepted on the same day they submitted their last application, Sept. 3. That was the first day the Pentagon made a range of federal benefits available to same-sex spouses of members of the military.

“It was really great. We were really excited,” Angela Shunk said in a phone interview last week from Aviano Air Base, Italy, where she and Stacey Shunk are currently assigned. “We’re so happy the process is finally over and we’re going to be stationed at the same location.”

A spokesman with the Air Force Personnel Center said last week that the service has received three applications for a same-sex join spouse assignment and so far approved one. It’s unknown whether the other services have received or granted similar applications.

The Shunks were told theirs was the first application in the Air Force to be approved. An Aviano news release published Thursday confirmed that.

Each branch of the service has programs that try to match military spouses with jobs at the same base. The Air Force doesn’t guarantee join spouse assignment, but will typically accommodate active-duty couples if there are valid staffing needs for both airmen’s career fields at the same location. Same-sex couples weren’t given this consideration prior to the repeal of DOMA because the law prevented U.S. government entities from recognizing their marriages.

After marrying in March 2012 in New York’s Central Park, the Shunks began planning for the day when their assignments would end at Aviano. They were optimistic that the Air Force would grant their request for an “exception to policy” for a military couple assignment. The Air Force denied it, along with a second application, which provided more detail on how a permanent separation would affect them. Not even an appeal on their behalf by a member of Congress could sway the Air Force in their favor.

“We were in a desperate place,” Angela Shunk said.

The Shunks last hope was the Supreme Court. They checked the court’s calendar weekly to see when it would hear arguments on DOMA. Stacey Shunk, meantime, delayed her re-enlistment. They matched up their dream sheets, hoping they’d get picked up for the same location. But in May, Stacey Shunk received orders to Hickam Air Force Base, Hawaii, and in July, Angela Shunk’s orders arrived for Hill Air Force Base in Utah. By then, however, the court had made its decision, ushering in marriage equality and renewed hope for the Shunks.

Stacey Shunk re-enlisted. On Sept. 3, they updated their status in the Defense Enrollment Eligibility Reporting System as married and filled out their application for join spouse consideration.

That same day, “Stacey called me when we got our assignment,” Angela Shunk said. The Air Force amended Stacey Shunk’s order for Hill and the two will fly out on the same day. “We were super excited.”

“Of course, we were hoping for Hawaii,” Angela Shunk said with a laugh.

At Hill, both Shunks will work in an air control squadron doing the same jobs they did at Aviano. Stacey Shunk maintains digital systems and Angela Shunk is a weapons controller.

The couple is relishing the hard work that comes with any military move, such as shipping their car and making plans to house-hunt in Utah because they’re doing those things together.

“Now, we’re just normal,” Angela Shunk said. “I feel that this chapter is over. Now we just get to move on the way every other couple does and there’s not really any barriers.”