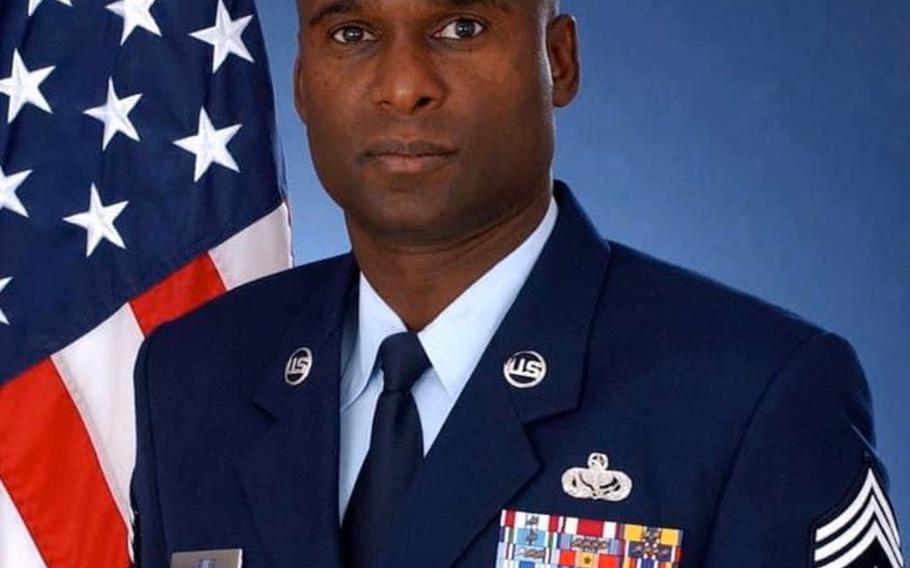 Retired chief master sergeant Juan Lewis, also known as the Fired Up Chief, is recovering from coronavirus in a Dutch hospital in Sittard, Netherlands, across the German border from Geilenkirchen NATO Air Base, where he works. Lewis, who earned his nickname through the uplifting talks he gave airmen, said the disease caused by the virus ''made me want to die.'' (U.S. Air Force)

Retired chief master sergeant Juan Lewis, also known as the Fired Up Chief, is recovering from coronavirus in a Dutch hospital in Sittard, Netherlands, across the German border from Geilenkirchen NATO Air Base, where he works. Lewis, who earned his nickname through the uplifting talks he gave airmen, said the disease caused by the virus ''made me want to die.'' (U.S. Air Force) 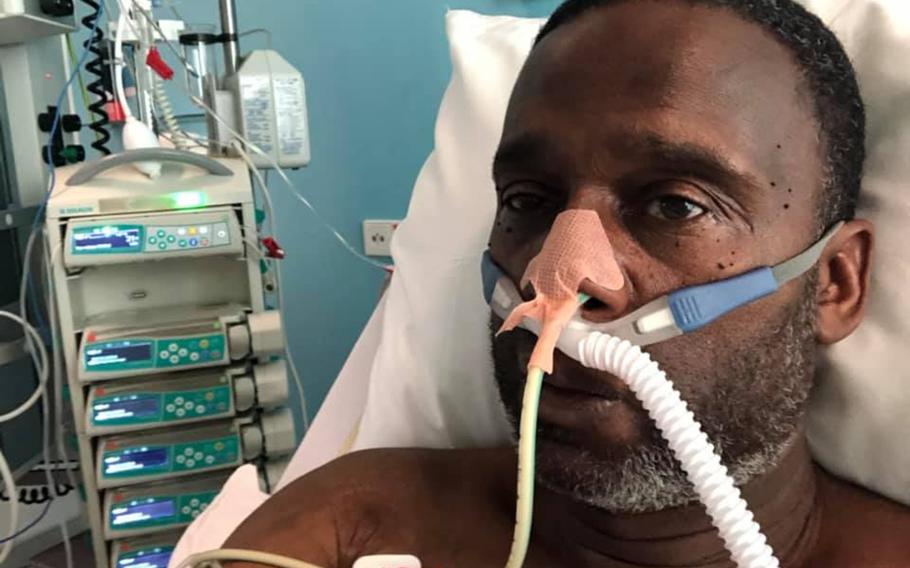 Retired chief master sergeant Juan Lewis recovers from the coronavirus in a Dutch hospital in Sittard, Netherlands, across the German border from Geilenkirchen NATO Air Base, where Lewis works. Also known as the Fired Up Chief for the uplifting talks he gave airmen, Lewis said the virus ''hit me so hard that it made me want to die.'' (Juan Lewis/Facebook)

KAISERSLAUTERN, Germany — Retired Air Force command chief master sergeant Juan Lewis is usually the one encouraging his tens of thousands of followers on social media and others in person to be positive and resilient in the face of life’s challenges.

But over the past few weeks, Lewis — who’s widely known as the “Fired Up Chief” for the uplifting talks he gave to airmen, starting when he was a command chief at Joint Base San Antonio-Lackland — was the one in need of support and motivation as he fought for his life after contracting the coronavirus.

“This thing, it hit me so hard that it made me want to die,” Lewis told Stars and Stripes over the phone from his hospital bed in the Dutch city of Sittard, which lies across the border from Geilenkirchen NATO Air Base in Germany.

Lewis works there as the deputy commander of the 470th Air Base Squadron, which falls under the 52nd Fighter Wing at Spangdahlem Air Base and supports about 2,300 Americans working for NATO.

Geilenkirchen is in the state of North Rhine-Westphalia, Germany’s most populous state, which has had nearly 29,000 confirmed coronavirus cases and 857 deaths, according to the latest figures from the Robert Koch Institute, the country’s public health agency.

“I was careful. I washed my hands, social distancing, and everything else that you can think of,” he said.

He’s physically fit and rarely sick, but has a rare condition called Melkersson-Rosenthal syndrome. People with underlying medical conditions “might be at higher risk for severe illness from COVID-19,” the Centers for Disease Control and Prevention says.

He was moved out of intensive care last week after being hospitalized in early April.

“I’m out of the woods, but I’m still struggling,” he said. “I don’t want to celebrate too early because I could have a relapse, but I do feel a hell of a lot better.”

His doctors told him that if he had not been fit from running, he likely would have died, Lewis said.

His battle with the coronavirus started in mid-March when he came down with what he thought was a cold.

His times for the 5-mile run he went on most mornings were around three minutes slower than usual, and he had a productive cough — not a dry one, which the CDC says is a common coronavirus symptom.

One day, while out with his wife, “I’m walking slower and slower and she’s, like, ‘Why are you walking so slow?’”

His doctor told him to self-isolate, but holed up in his home, the symptoms worsened.

“I had body aches, a fever, stomach cramps, sweating at night,” he said. “It was just doing a number.”

He went to the emergency room and was admitted to the intensive care unit on April 4, he said. There, a test showed he had COVID-19.

As the Fired Up Chief, Lewis has preached and practiced the power of positive thinking, but the virus sapped his mental and physical strength, he said.

“I was like, ‘Lord, just go ahead, I want to toss in the towel,’ the pain was so bad,” he said. “It hurt trying to breathe, the fever, just the chills.”

He’s thankful for the many messages of support from friends, airmen he’s mentored, even strangers who found him on Facebook.

“I didn’t get to read them all but the ones I did get to read were very, very inspiring and encouraged me to keep pushing,” he said.

Months of recovery lie ahead, he’s been told. Walking a few steps with a walker, even brushing his teeth, is arduous. He’s lost 40 pounds, prompting a friend to joke that “a KFC chicken leg has more meat on the bones than mine,” Lewis said.

The virus is still in his lungs, he said. His wife also tested positive for the virus but has recovered.

He can’t have visitors at the hospital, but on Sunday, his daughter called and told him to look out the window of his sixth-floor room.

She and her boyfriend “were outside waving at me. That made me feel so good, it brought tears to my eyes,” he said.

He’s posted several times from his hospital bed about his fight with the virus, hoping “to make people aware” and urge them to take the pandemic seriously, he said, even as some Americans demand that lockdown measures be lifted and the economy reopened.

“I understand people in the States, some of them want to get back to normality, but … the virus is still out there; it might even come back stronger.

“And I don’t know if that’s the price they really want to pay,” he said.