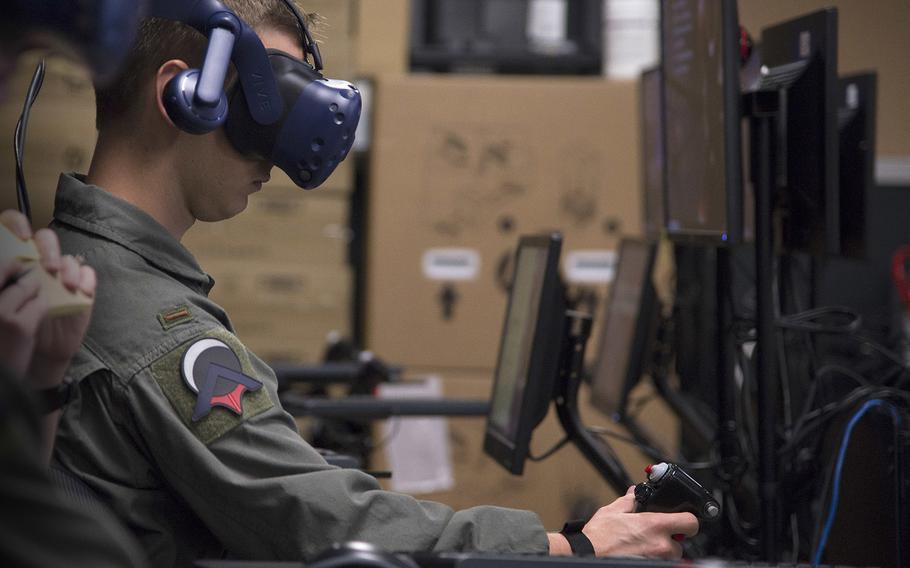 It’s an attempt by the Air Force to find ways to fill its pilot shortage and create a more diverse workforce, he said.

“The most important thing on that program is you still have to be willing to fight and kill and potentially die for your country to serve as an Air Force officer. And that's a pretty big lift,” Wills said Tuesday during a call about efforts to overhaul the Air Force’s pilot training to increase pools of candidates, speed up training time and redesign curriculum to match the technology-driven 21st century.

Air Education and Training Command, known as AETC, is tasked with sending 1,500 pilots a year into the Air Force, said Wills, who leads the command’s unit that trains pilots, as well as air crews, air battle managers, weapons directors, survival and escape specialists and many others.

To keep the standard the same for civilian-trained pilots, Wills and his team developed an assessment methodology that includes an oral exam, written exam and a series of flight checks in a simulator. Based on those scores, service officials determine how much Air Force training the pilots need.

“Somebody who is exceptional and extremely well qualified might be able to bypass undergraduate pilot training altogether. We would put those folks through an Air Force fundamentals course … to bring them up to speed on Air Force differences, teach them how we fly, teach them the things that they need to know to make a difference,” Wills said.

One challenge to launching the program is finding space in Officer Training School.

“We’re really not hiring pilots, we’re hiring officers who are trained as pilots. That's really the difference,” he said.

In a similar vein, the Air Force also is working on an initiative to offer ROTC scholarships at colleges and universities that have undergraduate aviation programs and are willing to work with the service on specific syllabus material. This could allow those students to graduate and then bypass a portion of Air Force pilot training using a similar methodology used for assessing prospective civilian pilots.

“Potentially, we could have an opportunity where we have added to the number of pilots at a relatively low-cost point,” Wills said. “Obviously, the number one thing is the quality of the training and the standard of these officers. That's non-negotiable.”

While recruiting more pilots, the service also wants to attract a more diverse pool of candidates that reflects the diversity of the Air Force and the country. As it stands, Air Force pilots are overwhelmingly white men.

As of March, the Air Force has 12,468 pilots and 87.3% are white, according to data self-reported by pilots to the service’s personnel center. The service has 860 female pilots, who are also about 87% white. Nearly 5% of pilots declined to provide their race. About 71% of the nearly 330,000 Air Force members are white, and 21% are women.

Last year, the service began developing a deliberate approach “to attract, recruit and retain the most qualified people from diverse backgrounds,” said Maj. Gen. Jeannie M. Leavitt, who is the AETC director of operations and communications and team leader of the Rated Diversity Improvement Strategy.

“A diverse force of unique strengths, perspectives and experiences strengthens our Air Force and helps maintain its competitive advantage,” she said in a statement on the efforts.

As it stands now, acceptance can lean toward wealthier candidates who can afford some flight training. Wills acknowledged this, and he said work is underway to overhaul the way that candidates are evaluated for pilot training. They are also looking at what can be done before prospective students arrive to provide them knowledge to help fill gaps in prior flight experience.

It’s not about lowering the standard but about removing barriers, Wills said. He also said he worries the current system is leaving behind exceptional candidates because of a lack of opportunity.

“We want the best candidate. We have no intention of getting anything but the best candidates, but we have to make sure we're using the right measures,” Wills said. “What I want is people who are willing to work as a team, people who have courage and grit and determination and resilience. I can go out with a credit card, and if I have a big enough credit card and I have a patient enough flight instructor, I can rack up a lot of hours and make myself look really good on paper. … But now you compare me to somebody who's working three jobs to get through school, who's an all-star on the football team, who's got heart and grit, and who's tough.”

Training the next generation

Other initiatives within AETC and 19th Air Force are targeting how to redesign pilot training so it better relates to a new generation of pilots who were raised on technology. This includes incorporating virtual reality, different types of simulators, and remote learning and teaching platforms.

“They have different expectations, and yet, our learning systems, generally speaking in our training pipelines, have failed to adapt thus far,” Wills said.

Many of the redesign concepts for undergraduate pilot training build off lessons learned from Pilot Training Next, a new, technology-heavy form of pilot training that began two years ago. Students get about 100 extra hours on immersive training devices such as virtual-reality simulators. A new, more reliable common immersive training device is in development with a contractor to provide to all students, Wills said. It should reduce the maintenance that is needed on the devices used now.

At the end of this phase, which uses the T-6 Texan aircraft, graduates will become Air Force pilots, and move on to further training specifically for their selected aircraft.

A separate concept to speed up training time called the Accelerated Path to Wings uses only the T-1 Jayhawk aircraft to train pilots and allows students to graduate in seven months instead of 12 months.

The first eight students in this accelerated program graduated this month at Randolph Air Force Base in Texas.

“What we found is that, in fact, you can train to the same standard,” Wills said. “We certainly had some lessons learned along the way, but the students responded magnificently. The instructors have given us good feedback on that program. Although we're continuing to pore through the data and look at it right now, we're quite confident that we've just sent high-quality graduates off to their formal training units after only flying the T-1.”

In a statement provided through AETC, 2nd Lt. Andrew Button said graduating in this first class was “pretty special.”

“I volunteered for this not knowing if it would work out or not, but I just put my trust in the Air Force,” said Button, who is slated to fly the C-17 Globemaster III, a fixed-wing cargo aircraft, at Joint Base Charleston, S.C.

When it comes to helicopter pilots, the Air Force is testing two options that do not require them to first fly in fixed-wing training planes before going to the Army’s training program at Fort Rucker, Ala. One option sends students straight to Fort Rucker, and the other sends them first to a contractor, then to Fort Rucker.

“We're very, very encouraged by the results thus far with both of those small group trials. We're in the final stages of evaluating the way ahead. We're very, very optimistic about a helicopter-only path for our helicopter pilots and very confident in the work that's being done,” Wills said.

These plans could shave about six months off training time and save the Air Force about $250,000 per pilot, he said.

Through all these initiatives, Wills sees a path toward meeting the goal of 1,500 new Air Force pilots each year by 2024.

“If we can't produce high-quality pilots in relevant numbers, we're going to have second- and third-order effects that stay with us for a very long time,” Wills said. “The charter that we've gotten here is to accelerate change. A lot of folks don't really like change, especially when you're changing something that you know works.”