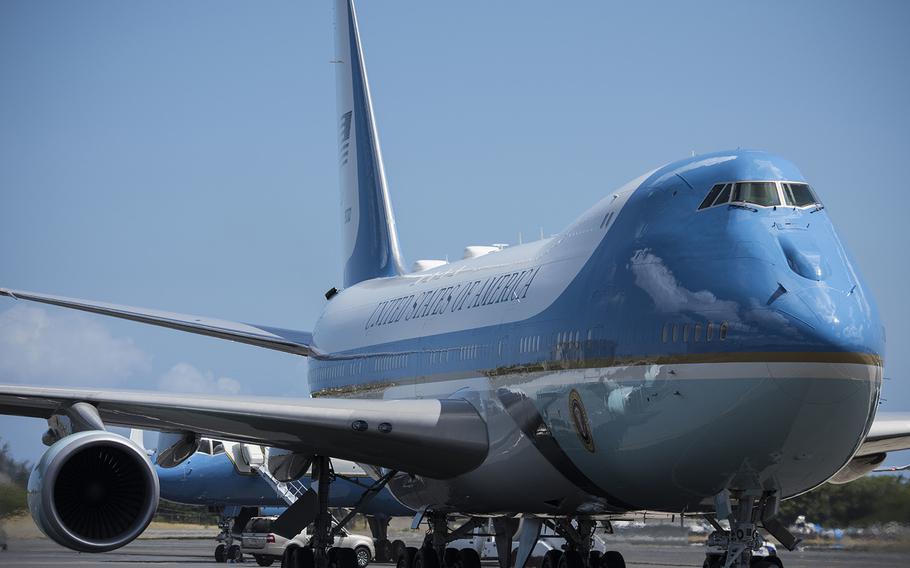 An $84 million contract to create manuals for two new Air Force One aircraft was awarded to Boeing, according to the Air Force.

The contract is the second additional contract awarded to Boeing for the new planes since President Donald Trump announced in 2018 that he saved taxpayers $1.4 billion by renegotiating the deal, which predated his administration. In July 2018, the White House announced the replacement aircraft would cost $3.9 billion through a “firm fixed-price contract” between the Air Force and the Seattle-based company.

Formal replacement efforts for Air Force One planes began in 2011. The current aircraft in service are more than 31 years old, according to the White House.

The two new planes began a multiyear modification process in March in San Antonio and have the military designation VC-25B, according to a March 11 news release from the Air Force Life Cycle Management Center, located at Wright-Patterson Air Force Base in Ohio.

The manuals contract announced April 15 pays for Boeing and subcontractors to “modify commercial manuals, update with VC-25B-specific information and deliver integrated manuals for the VC-25B system,” according to a news release about the contract. Work on the manuals will be performed in Seattle and the Air Force expects to receive them at least 30 days prior to delivery of the planes, said Ann Stefanek, spokeswoman for the Air Force.

They will continue to hone the documents through Jan. 15, 2025, when the contract ends.

These manuals are thousands of pages and include a library of information about flying, operating and maintaining the planes, said Jim Hodgson, executive director of the Fort Worth Aviation Museum. Hodgson served as a pilot in the Marine Corps and flew several Boeing aircraft during his more than 30 years with Continental Airlines.

Modifying commercial manuals for the Air Force’s use should make the process easier, but likely includes Boeing personnel using simulators to go through and verify all the procedures, Hodgson said.

“The manual has to be very precise and has to be the logical prescribed steps for items,” he said. “The Air Force may have some special requirements they want in there as well.”

In December, Boeing received an additional $12 million contract related to airworthiness directives and safety modifications to the engines of the future Air Force One planes. These directives are also pretty standard, Hodgson said.

The new aircraft are expected to begin operations in 2024 and to conduct presidential travel for the next 30 years.

Boeing prepared the two aircraft for modification by removing the commercial interiors, engines, auxiliary power units and numerous secondary system components, according to the release.

Both planes are 747-8 aircraft that, when used commercially, can carry more than 400 passengers, according to Boeing’s website. The model has been in use for about 10 years and stands as tall as an average six-story building.

To accommodate the new planes at their future home at Joint Base Andrews, Md., the Air Force is constructing a new $298 million hangar complex, which includes the relocation of a hazardous cargo pad, an explosive ordnance disposal range, areas of the existing golf courses and military working dog kennels.