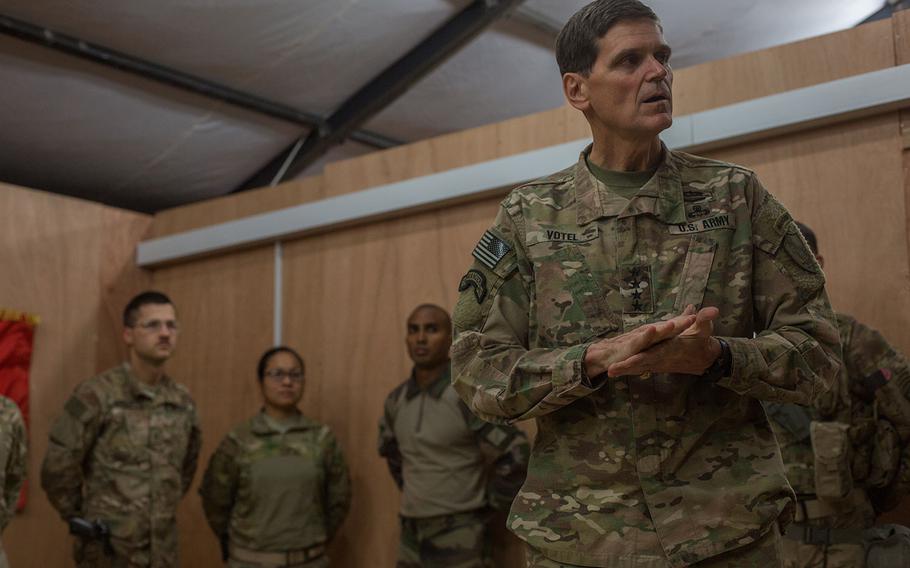 WASHINGTON — The top U.S. commander in the Middle East said Wednesday that any military plans in Syria should involve the moderate rebels there who have been allies in the fight against the Islamic State group.

During the last two years, the United States has trained and equipped thousands of Kurdish fighters and Syrian rebels to develop a force that is now advancing on Islamic State fighters in Raqqa, the terrorist group’s de-facto capitol in Syria.

Gen. Joseph Votel, who leads U.S. Central Command, spoke about the United States maintaining its support for those Syrian rebels Wednesday at a conference sponsored by the Foreign Policy Initiative, a nonpartisan, nonprofit think tank in Washington, D.C.

“I can think of a number of groups…who we have been working with, who have been very, very good partners to us and done our bidding with our support, with our coalition support," he said. "So I think we should look to do that, and I hope we will find a way to continue to do that.”

But whether President-elect Donald Trump’s administration will support those Syrian forces remains in question.

During Trump’s campaign, he made statements on the need to improve U.S. relations with Russia, which has generated speculation that his administration could alter the U.S. role in Syria.

Russia has backed the regime of Syrian President Bashar Assad in a more than five-year-old civil war against various rebel groups, some of which have received support from the United States in their fight against the Islamic State group.

On Wednesday, Russian Deputy Foreign Minister Mikhail Bogdanov said his government has been in contact with Trump’s transition team about Syria, according to TASS, Russia’s state-owned news agency.

But Votel, who previously led U.S. Special Operations Command and the deployment of 300 special operators who advised and assisted Kurdish fighters against the Islamic State group, said what happens in Syria is a political decision that remains to be seen.

"As a military professional we’ll take a look at what happens and we’ll look at how we adjust to that particular situation,” he said.