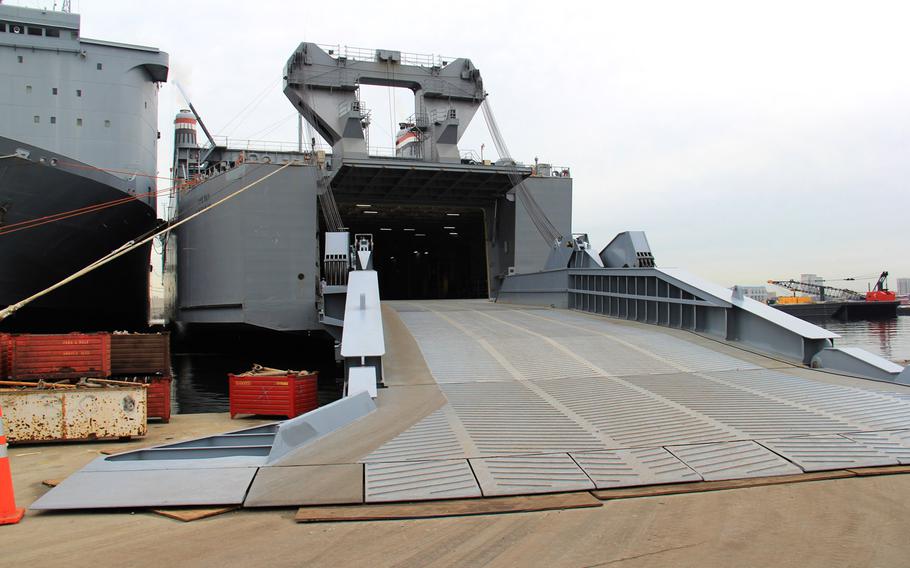 Pictured is the entrance to the Cape Ray docked at the NASSCO-Earl Shipyard in Portsmouth, Va., January 2, 2014. The Cape Ray is being utilized as a transport vessel for a Field Deployable Hydrolysis System designed to render chemical warfare material into compounds not usable as weapons. (Rick Vasquez/Stars and Stripes)

Pictured is the entrance to the Cape Ray docked at the NASSCO-Earl Shipyard in Portsmouth, Va., January 2, 2014. The Cape Ray is being utilized as a transport vessel for a Field Deployable Hydrolysis System designed to render chemical warfare material into compounds not usable as weapons. (Rick Vasquez/Stars and Stripes) 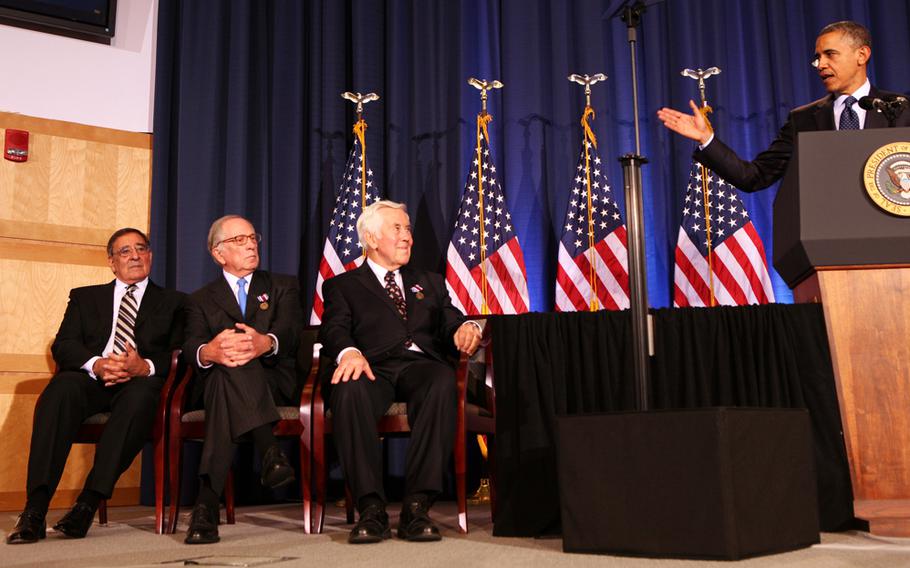 U.S. President Barack Obama delivers remarks to the Nunn-Lugar Cooperative Threat Reduction symposium at the National Defense University for the 20th anniversary of the CTR program while then Secretary of Defense Leon Panetta, left, former Senator Sam Nunn, second from left, and Senator Dick Lugar, second from right, listen in Washington, D.C., Dec. 3, 2012. In his speech, the president acknowledged the extraordinary progress made in securing nuclear material, and thanked Senators Nunn and Lugar for their works on those issues. (Pool photo by Aude Guerrucci/Polaris via Abaca Press/MCT)

NAPLES, Italy — When the breakup of the Soviet Union stranded thousands of nuclear warheads in unsecured sites across Russia and the former Soviet republics in 1991, Congress approved a $400 million emergency fund within the Pentagon to help dismantle and protect the loose arms.

Two decades later, the Nunn-Lugar Cooperative Threat Reduction program, named for the two senators who pushed the original legislation, remains an active and widely celebrated disarmament and nonproliferation program within the Defense Department. Since 1991, it has helped dismantle more than 7,600 warheads, destroy more than 900 intercontinental ballistic missiles and remove nuclear weapons from countries like Kazakhstan and Ukraine.

As last month’s destruction of a final cache of Libya’s chemical weapons showed, the program’s efforts now go beyond the boundaries of the former Soviet Union and into countries like Africa and Asia where it increasingly focuses on securing or destroying biological and chemical weapons.

With a budget that hovers above $500 million a year, a little more than 1 percent of the Pentagon’s baseline budget, Nunn-Lugar is money well spent, observers say.

“I think this program exceeded everyone’s wildest expectations,” said Joe Cirincione, president of the Ploughshares Fund, an American foundation that promotes the elimination and nonproliferation of nuclear weapons.

One of its latest efforts has yet to unfold. The refitted U.S. merchant vessel MV Cape Ray is steaming toward the Mediterranean Sea to receive 560 tons of Syria’s most toxic chemical weapons. On board is a chemical-neutralizing hydrolysis system installed with funding from Nunn-Lugar.

“The expertise that’s been developed over the years in the program with Russia has been applied in Libya and in Syria,” said Daryl Kimball, executive director of the Arms Control Association, a U.S. nonproliferation advocacy group.

At its creation, Nunn-Lugar faced a daunting task. The Soviet Union boasted 11,000 warheads at its dissolution, with missile-delivery systems on land and under water, and with weapons sites in Russia, Ukraine, Belarus and Kazakhstan.

“It was supposed to be a quick infusion of expertise and funding to secure the loose nukes in the chaos of the collapse of the Soviet Union,” Cirincione said of the program. “Then two things happened. They realized how bad the security and facilities were deteriorating and how much help was needed — so the program extended — and then they realized they could develop ties with the scientists … and help them transition into using their skills elsewhere.”

The program works with countries to identify projects and then provides funding, technical expertise and sometimes the materials to get the work done.

The earliest projects deactivated warheads and destroyed delivery systems under the Strategic Arms Reduction Treaty. Growing concern in the U.S. over terrorism and the possibility that material from former Soviet states could be used in an attack encouraged more funding to Nunn-Lugar for nonproliferation projects.

Congress expanded Nunn-Lugar projects in the 1990s to secure nuclear facilities and encouraged more work in securing chemical and biological centers. In the mid-2000s, the George W. Bush administration sought to use Nunn-Lugar funds for export and border control programs and for the detection of radiological “dirty” bombs.

In 2004, Nunn-Lugar worked for the first time outside the former USSR when it helped Albania destroy its chemical weapons stockpile. The project marked the first destruction of a country’s full chemical weapons program, according to the DOD.

Today, the program remains focused on securing potential material that could be turned into weapons of mass destruction. More than half of Nunn-Lugar’s annual budget now goes to securing biological agents held in laboratories in Asian and African countries. Few of those countries have biological weapons programs, but all collect dangerous pathogens for study.

The shift in Nunn-Lugar’s focus is underlined by its altered relationship with Russia, which curtailed Nunn-Lugar program activities in the country in 2013. Under a new agreement, Russian officials will continue the destruction and deactivation of munitions on its own while still allowing Nunn-Lugar to work on projects related to nuclear security in the country.

The program is likely to remain busy, however. The latest defense authorization bill passed by Congress called for Nunn-Lugar to reach out to more African and Middle Eastern countries to aid nonproliferation projects and destroy chemical weapons programs. Jennifer Elzea, a DOD spokeswoman, said the program will continue to evolve as new threats surface.

“Obviously Nunn-Lugar will live on because (weapons of mass destruction) live on,” she said.