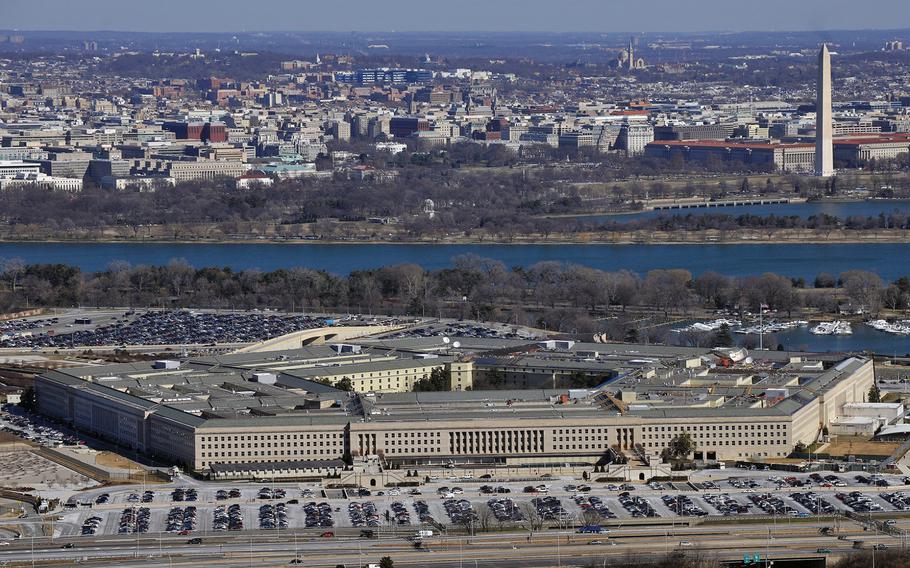 The Pentagon with the Washington Monument and National Mall in the background. (U.S. Department of Defense)

WASHINGTON — The Pentagon and the White House are weighing whether a new law that ensures military members as well as some Defense Department civilians keep getting paid during the government shutdown could be used to bring furloughed civilians back to work.

Federal legislators who passed the law, meanwhile, say the Pentagon has the authority now to end the DOD civilian furloughs.

On Tuesday, as hundreds of thousands of DOD employees went on furlough, Pentagon lawyers sent a legal brief to the White House Office of Management and Budget that a defense official, speaking on the condition of anonymity, said had “recommended maximum flexibility” in interpreting the “Pay Our Military Act.”

The act, signed into law late Monday, authorizes paychecks for military members as well as DOD civilians who Defense Secretary Chuck Hagel determines “are providing support to members of the Armed Forces.”

The questions of how broadly “providing support” could be interpreted and how many of an estimated 400,000 furloughed civilians might return to work were being ironed out Wednesday as executive branch attorneys mulled the legal requirements of a government shutdown brought on by a deadlocked Congress’ inability to pass by midnight Monday a measure to fund federal operations.

In a letter sent Tuesday to Hagel, Rep. Buck McKeon, R-Calif., chairman of the House Armed Services committee, told Hagel that DOD civilians who are currently sitting at home are actually authorized to work by the new law.

“I believe the legislation provides you broad latitude and I encourage you to use it,” McKeon wrote. “The text does not limit the provision of pay to civilians who were previously categorized by the Administration as 'excepted' or 'essential' … Therefore, I strongly encourage you to use the authority Congress has given you to keep national security running, rather than keeping defense civilians at home when they are authorized to work.”

In another letter sent Monday to Hagel, Rep. Michael R. Turner, R-Ohio, said all furloughed employees at Wright-Patterson Air Force Base in his district provide support for the military, as specified in the new law, and thus should be allowed to work.

“The law is clear and provides the department as well as the United States Coast Guard with authority to immediately call its civilian employees back to work,” Turner wrote. The Coast Guard falls under the Department of Homeland Security.

Earlier Tuesday, Hagel said the Pentagon was looking for ways to reduce the number of furloughed civilians.

“Our lawyers are now looking through the law that the president signed … to see if there’s any margin here, or widening in the interpretation of the law of exempt versus non-exempt civilians,” he said. “But it’s a priority that we have, that we’re working on right now. It’s, in fact, the priority in our general counsel’s office.”