What does the pizza MRE taste like? Troops try the long-awaited ‘holy grail’ of military rations 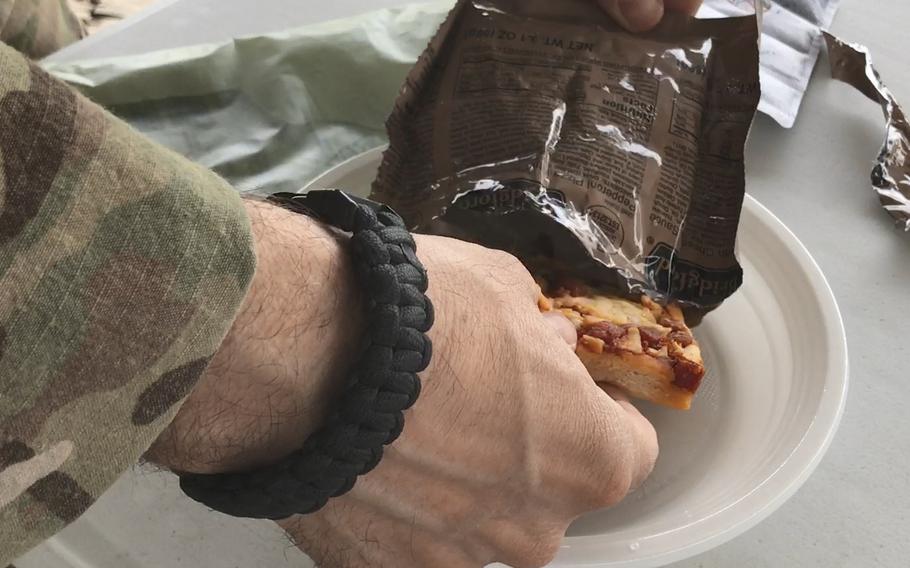 A U.S. servicemember pulls a Meal, Ready to Eat pepperoni pizza from its bag during a taste test of the new military ration at NATO headquarters in Kabul, Afghanistan, on Wednesday, July 4, 2018. (Chad Garland/Stars and Stripes)

A U.S. servicemember pulls a Meal, Ready to Eat pepperoni pizza from its bag during a taste test of the new military ration at NATO headquarters in Kabul, Afghanistan, on Wednesday, July 4, 2018. (Chad Garland/Stars and Stripes) 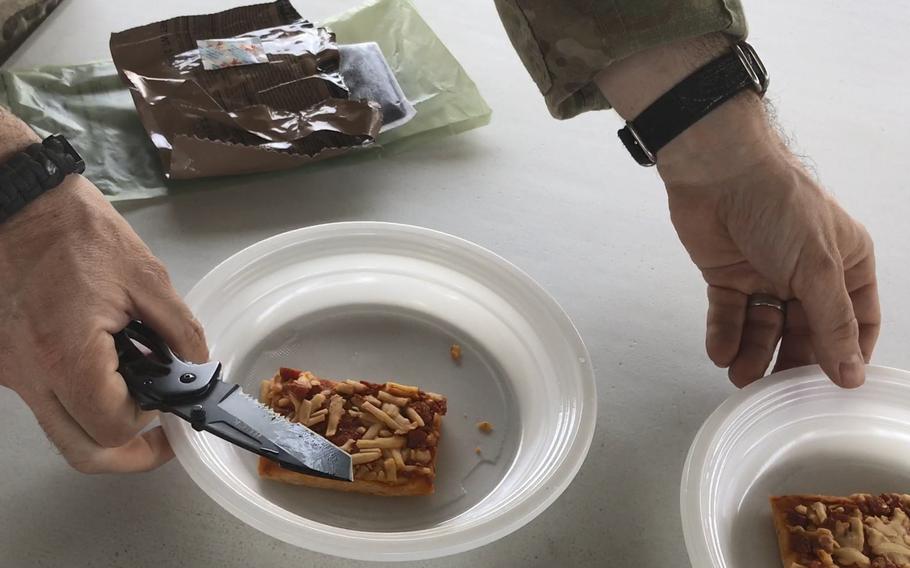 Navy Lt. Tom Perez prepares to serve two halves of a Meal, Ready to Eat pepperoni pizza during a taste test of the new military ration at NATO headquarters in Kabul, Afghanistan, on Wednesday, July 4, 2018. (Chad Garland/Stars and Stripes) 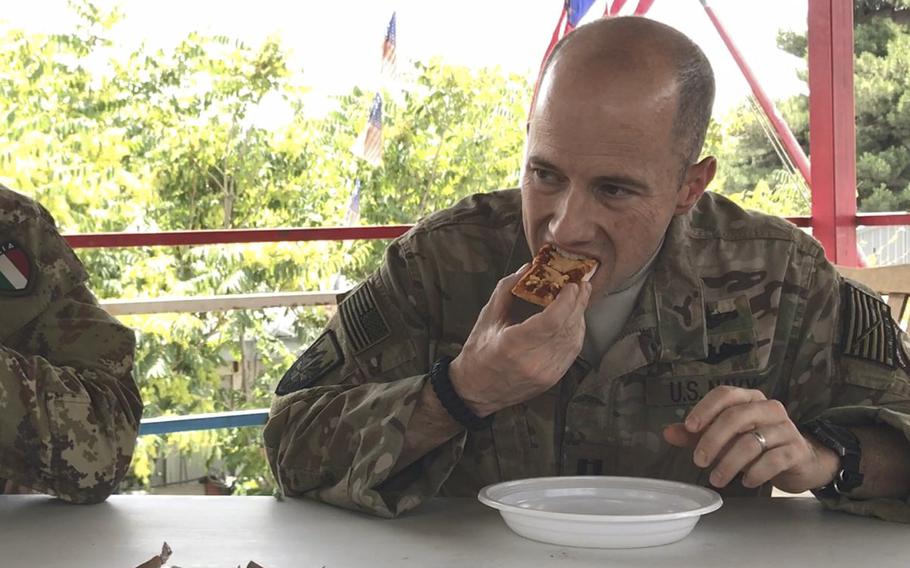 Pictured here biting into a Meal, Ready to Eat pepperoni pizza on Wednesday, July 4, 2018, is Navy Lt. Tom Perez, one of six U.S. troops to sample the new pizza ration during a taste test in Kabul. (Chad Garland/Stars and Stripes) 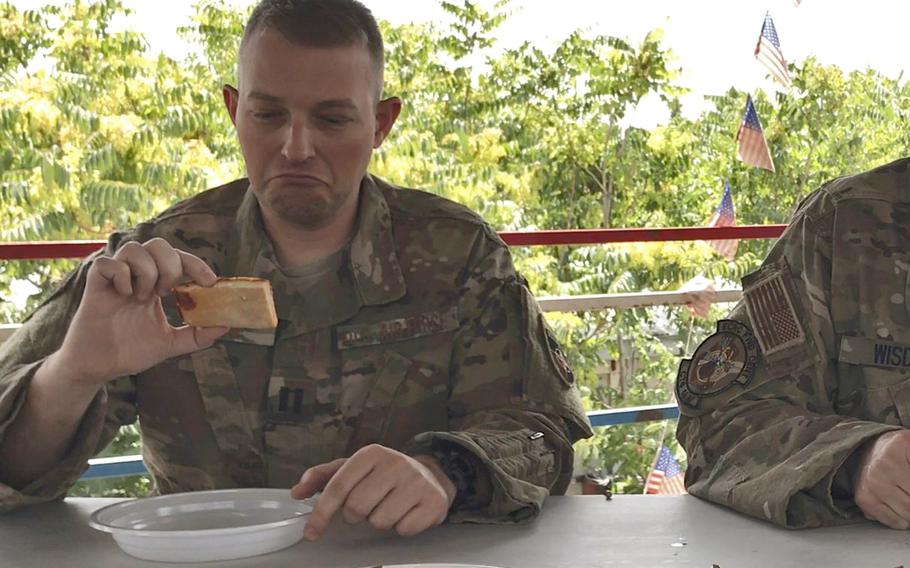 Air Force Capt. Robert Erskine inspects his half slice of a Meal, Ready to Eat pepperoni pizza during a taste test of the new military ration in Kabul, Afghanistan, on Wednesday, July 4, 2018. (Chad Garland/Stars and Stripes)

KABUL, Afghanistan — It took more than 30 minutes to arrive, but the pizza was coming from Massachusetts, via Ramstein Air Base in Germany and Bagram Air Field, to the Afghan capital.

Plus, unlike Domino’s, it’s got a three-year shelf life.

In anticipation of the long-awaited rollout of the Meal, Ready to Eat pepperoni pizza that’s been called “the holy grail of MREs,” Stars and Stripes flew several of the military ration’s main pizza entrees into Afghanistan for taste tests with the troops.

The feedback was generally positive — some said it was a contender for a new favorite menu item. It’s designed to be eaten cold or hot, but those who tried it cold said it would be better heated. Some said it was a bit too bready or needed the added flavor of cheese spread, which will come with the full MRE.

Erskine, from Yakima, Wash., said he wouldn’t order it if it was on the room service menu. Partial to thin crust, Erskine said he liked it better once he sliced off the bottom two-thirds of bread.

Since the 1980s, soldiers have been asking for a pizza MRE, according to the Army. In 2012, the U.S. Army Natick Soldier Research, Development and Engineering Center in Natick, Mass., began the tricky task of developing a slice-in-a-pouch that would be shelf-stable for 36 months.

“It’s a very difficult food to create to be able to store for a long time at room temperature,” said Anastacia Marx de Salcedo, the author of “Combat-Ready Kitchen: How the U. S. Military Shapes the Way You Eat.”

Marx de Salcedo keeps up with military food innovation and traces the ways the technology and foods eventually reach the public. McDonald’s McRib, for example, traces its lineage to military food developments.

Recent military advances in chemical-free food preservation may lead to healthier processed foods, she said, such as “a TV dinner that you can throw into a closet” instead of a freezer.

It’s too soon to say whether the MRE pizza will one day reach the public, but the techniques that make it possible may.

Part of the difficulty for the pizza developers was creating a barrier between the various pizza components — cheese, sauce, crust and toppings. Basil and tomato films were used to create “very, very thin layers between each ingredient,” Marx de Salcedo said.

The components can be made shelf-stable on their own, but “the real trick” is to get them “inside a pouch, happily together,” Jeremy Whitsitt, deputy director of the Defense Department’s Combat Feeding Directorate, said in a statement.

The pizzas were field-tested beginning in 2014. They were delayed in reaching the troops by production hiccups last year, but Whitsitt said they will hit the pipeline next year at the latest.

In addition to a square of pizza, the full MRE will contain cheese spread with jalapenos, Italian breadsticks, cherry/blueberry cobbler, cookies and chocolate protein powder.

The full MRE wasn’t available this summer for the taste test, but the Combat Feeding Directorate shipped a few of the pizzas by themselves.

“You can’t fully appreciate the value of an MRE unless you are cold, wet, tired and hungry — sitting in the dark and the rain on a mountain in Afghanistan,” said David A. Accetta, spokesman for the Soldier Research, Development and Engineering Center and a veteran of the wars in Iraq and Afghanistan. “That’s when the MRE, and the ability to have a hot meal anywhere, provides that touch of home and comfort.”

To test this theory, Stars and Stripes hand-delivered the pizzas to Tech. Sgt. Jeffrey Akin at Ramstein, who put them on a flight to Bagram. From there, they made it to our reporter in Kabul.

Meanwhile, Stars and Stripes cobbled together some cheese spread — with and without jalapeno — MRE heaters and other condiments from near-expired MREs that were being sold on Kabul’s black market.

Seven U.S. servicemembers and two Italian soldiers tried them at the NATO mission’s headquarters in Kabul. Not exactly cold, wet and starving on a mountain, but still in harm’s way.

The consensus among the volunteers was that it tasted somewhat like day-old pizza, which many said was not a bad feat.

Hailing from Racine, Wis., the “land of cheese,” Chaplain (Col.) Kenneth Sorenson said he even liked the cheese.

The Italians seemed to like it — at least as a field ration.

“Taking into consideration where I’m going to eat that kind of pizza, yes, it’s good, in the middle of the s---,” said Maj. Gianluca Cinque, a member of Italy’s Alpini mountain warfare troops. “We just need a beer inside.”