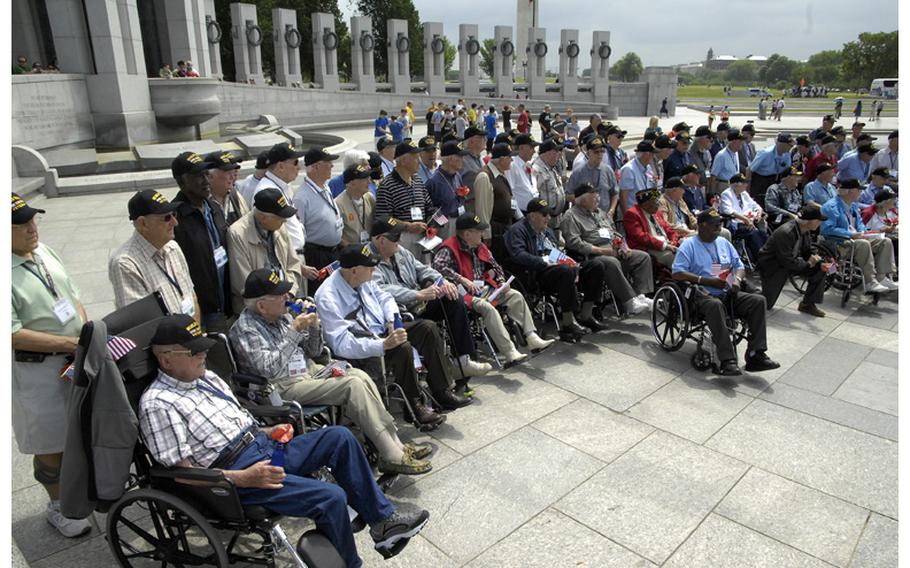 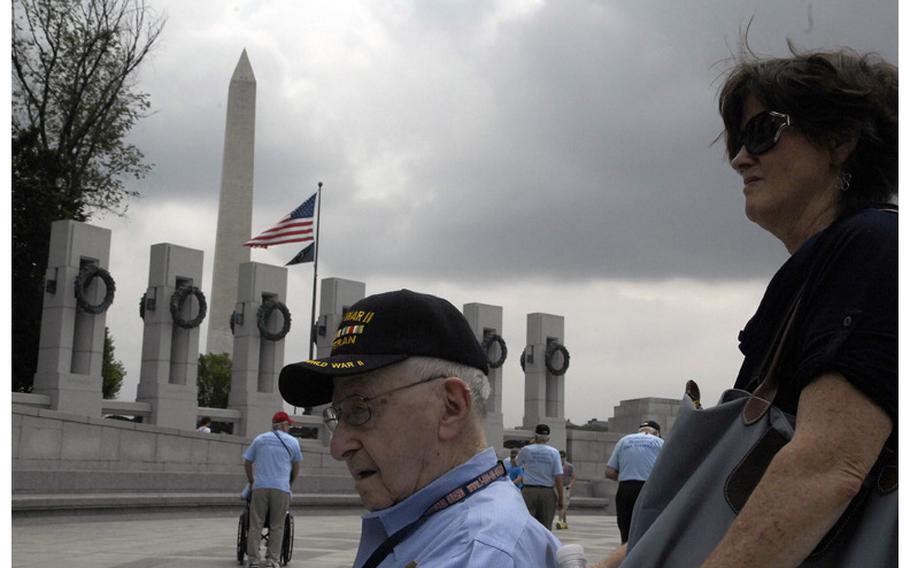 Billy Coleman looks at a fountain with "Salerno" etched in the stone. For the 96-year-old WWII veteran, Salerno, Italy, was, in his mind, the toughest battle. (Carlos Bongioanni/Stars and Stripes)

When Charles Kayhart looks back on his long life, the 100-year-old WW II veteran calls it a happy one. Except, he says, for the time he spent on Iwo Jima.

Kayhart, among a host of other veterans visiting the World War II Memorial in Washington, D.C., on Wednesday, recalled the terrible spectacle he saw as dead bodies by the thousands were brought in from the battle field.

Turning down an Army offer to be stationed on Hawaii with his family after the war, the former signal corps officer, originally from New Jersey, returned to civilian life and eventually relocated to Greenville, Tenn., where he retired in 1976. He says he keeps busy mowing his own lawn with a push mower, tending to his flower garden and playing an occasional round of golf.

The secret to his longevity? &ldquo;I&rsquo;m very lucky,&rdquo; he said. &ldquo;The good Lord did that for me&hellip;. He has made me see the light, and, number one, don&rsquo;t get angry with people. And, treat people very decently, which I have always done. And they have treated me decently.&rdquo;

Billy Coleman, 96, recalled what, in his mind, was the toughest battle of all: Salerno, Italy.

The former Navy officer told of the Army officer he befriended who couldn&rsquo;t wait to get off the ship they were on in the Mediterranean and step onto solid ground. To while away their time, they played bridge days on end, with daily breaks for the soldier to relieve his seasickness.

When they finally reached land, German aircraft swooped down on them with all their guns firing. The two jumped into the sand. After he got up terrified, Coleman felt himself to see if he had been shot. After realizing he was OK, Coleman saw his buddy lying dead in the sand an arm&rsquo;s length away.

Melvin Decker, 88, was on his 13th mission as a rear gunner on a B-24, when he was shot down over France, according to Jackeline Clawson, his daughter.

Clawson said she brought her father to the memorial because, &ldquo;I wanted him to be honored&hellip;. He&rsquo;s a great man.&rdquo;

She recalled that after being shot down, her father had a metal bar inserted in his injured leg. When he was released from the hospital towards the end of the war, he was transferred to an infantry unit and sent to help out in the decisive Battle of the Bulge.