Warrior Games 2015: Athletes gear up to show off elite skills 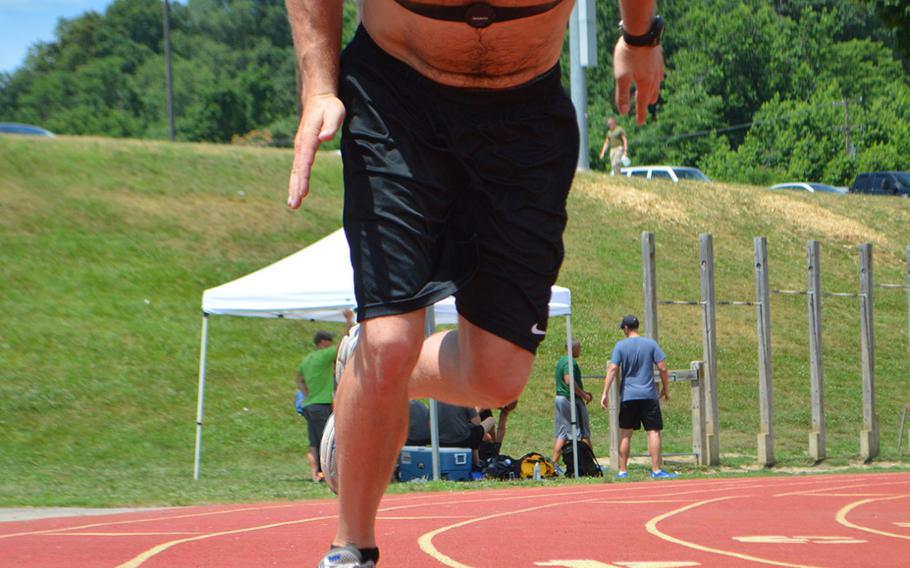 Retired Air Force Sr. Airman Kendell Madden, 31, takes off from a starting position for the camera June 18, 2015, during training a day before the Warrior Games kicks off at Quantico in Virginia. (Meredith Tibbetts/Stars and Stripes)

Retired Air Force Sr. Airman Kendell Madden, 31, takes off from a starting position for the camera June 18, 2015, during training a day before the Warrior Games kicks off at Quantico in Virginia. (Meredith Tibbetts/Stars and Stripes) Maj. Gen. Juan Ayala, commanding general of the Marine Corps National Capital Region, prepares to pass the ball as he works out with wheelchair basketball players in advance of the 2015 Warrior Games at Marine Corps Base Quantico, June 18, 2015. ( Joe Gromelski/Stars and Stripes) Lance Cpl. Duncan Mathis talks about his experiences after a workout with the Wounded Warrior wheelchair basketball team on media day for the 2015 Warrior Games at Marine Corps Base Quantico, Va., June 18, 2015. ( Joe Gromelski/Stars and Stripes) 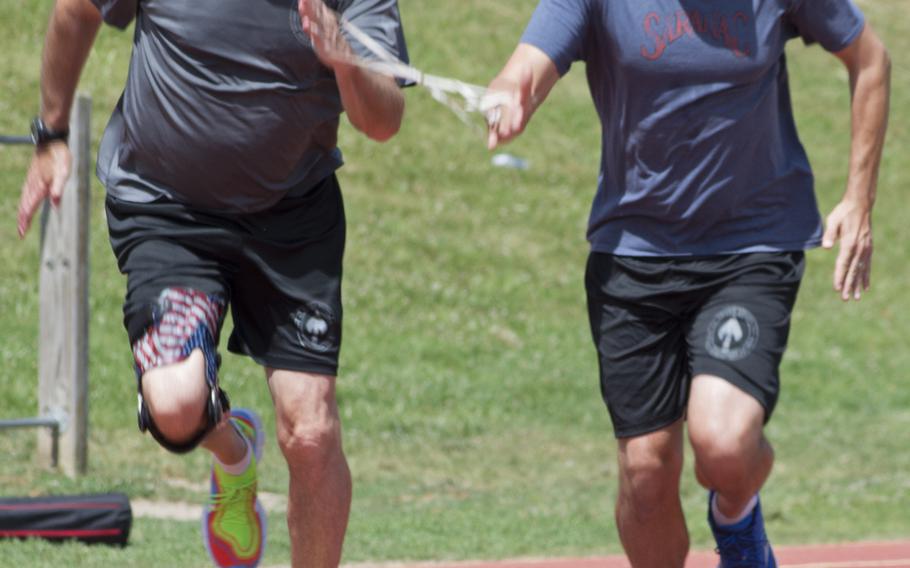 A wounded warrior runs during training practice at the track at Quantico on June 18, 2015, the day before the Wounded Warrior Games kick off. (Meredith Tibbetts/Stars and Stripes) Two people practice on the track the day at Quantico on June 18, 2015, the day before the Wounded Warrior Games kick off. (Meredith Tibbetts/Stars and Stripes) A US Army runner cheers on a wounded warrior at Quantico on June 18, 2015, the day before the Wounded Warrior Games. (Meredith Tibbetts/Stars and Stripes) Haley Gilbraith, 23, poses for a photo during a break in training on June 18, 2015, the day before the Wounded Warrior Games kick off at Quantico. (Meredith Tibbetts/Stars and Stripes) Mike McPhall practices on the track on June 18, 2015, the day before the Wounded Warrior Games kick off at Quantico. (Meredith Tibbetts/Stars and Stripes)

MARINE CORPS BASE QUANTICO, Va. — Last summer, Lance Cpl. Duncan Mathis was in no mood for sports. A year into his recovery from devastating injuries in Afghanistan, the young marine wasn’t enthusiastic about anything.

But he was still an active-duty Marine and despite not having the use of his left leg, he wasn’t exempt from following orders. So, at the behest of his command, he sulked over going to the Warrior Games, a sporting event that brings together disabled veterans and active-duty athletes from across the country for a series of competitions.

“They kind of force you to go, so I was kind of pissed off and angry,” Mathis said. “But to watch the spirit of being here — everybody’s injured and nobody gives a (expletive). To see a quadruple amputee run track; yeah, you’ve got nothing to complain about.”

Mathis, 21, later had his injured leg amputated below the knee, and this year he will compete in wheelchair basketball, cycling and track and field. Starting Friday, he will join about 270 athletes from around the country as they compete in events such as volleyball, shooting and archery. On Thursday, athletes with a variety of injuries, from paralysis to amputations to traumatic brain injuries, took to the gym, track, and pool to warm up for what is to be more than a week of competition.

Some have retired from the military because of their injuries, others are still recovering, and at least one has returned to active duty and has logged multiple deployments to Afghanistan after having his leg amputated.

The Warrior Games started in 2010 as a venue for elite veteran and active-duty disabled athletes to compete and show their skills to Paralympic Games coaches. This year, the Department of Defense is organizing the event for the first time, taking over from the U.S. Olympic Committee, broadening it to include athletes at all skill levels and to keep the focus on sports as a means for recovery, Warriors Games officials said.

For Mathis, the competition proved to be the breakthrough needed for a stagnant rehabilitation. His ordeal began in May 2013 while on a mission in Helmand province, Afghanistan, when the ground gave way beneath him. He fell 80 feet into a well, shattering his legs and suffering serious injuries throughout his body.

Then, his unit was caught in a firefight and it took four hours for a helicopter to get him out. He worked for more than a year and a half to save his left leg, but he finally decided in January to allow doctors to amputate it.

In the midst of his recovery he grew depressed — he was doing rehab while his fellow marines were still in danger. He lashed out at his loved ones and struggled to find motivation.

“We call it ‘going internal,’” he said. “ I was very negative, extremely angry.”

That changed last summer, when he was, as troops call it, “voluntold” to participate in the Warrior Games. There, he saw more severely injured troops excelling athletically, which boosted his spirits and helped him accept his reality.

“I was terrified of losing my leg until I came here,” he said.

Many of the Warrior Games participants only picked up their sports after getting injured.

Haley Gilbraith, 23, hadn’t played any sports competitively before she was paralyzed from the waist down in an ATV accident in 2013. But just two months after her accident, the Air Force senior airmen’s recovery care coordinator took her to a camp for adaptive sports. Gilbraith said her arms were so sore she could barely feel them after the first day, but slowly her skills improved.

Watching athletes who were further along in their recovery inspired her, and after attending the Warrior Games last year, she went from barely leaving her stepfather’s house to becoming independent and buying her own home., where she lives on her own.

“I wanted to get to where they were, so I started pushing myself instead of just lying about, feeling sorry for myself,” Gilbraith said.

For Kendell Madden, 31, a retired Air Force special operations senior airman who was badly injured in a plane crash during an exercise in South Korea, being around wounded veterans and troops who know what he’s been through is just as important as the competition.

Madden, who is still dealing with the effects of traumatic brain injury and post-traumatic stress disorder, is competing in track, swimming and discus this year.

“This is probably the best treatment you can get,” he said. “Everyone [here] knows what the struggle is like.”

One athlete who’s helped Madden and many others gain confidence is Army Master Sgt. Joseph Kapacziewski, a 32-year-old Ranger whose prowess on the track is overshadowed by his accomplishments in uniform.

In 2005 he was severely injured by a grenade while serving in northern Iraq and had his right leg amputated below the knee after working for a year and a half to save it. After working tirelessly to learn to walk and run on a prosthetic leg, he re-qualified as a Ranger in 2009 and deployed to Afghanistan - six times.

Kapacziewski says the games are an important venue for more seasoned athletes like himself to instill confidence in troops and veterans early in their recovery.

“For first-timers, it opens up their eyes to some of the possibilities for them,” he said.

The Warrior Games run through ​June 28 at Marine Corps Base Quantico.