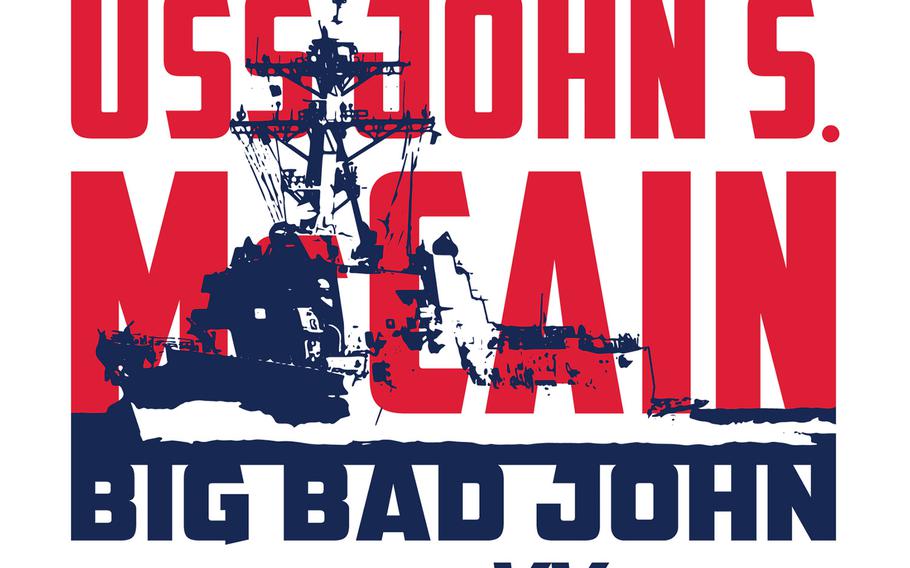 The design on the shirt paying tribute to the USS John S. McCain. (ragsofhonor.us)

WASHINGTON — A group of veterans plans to hand out thousands of T-shirts during President Donald Trump’s Fourth of July event in Washington that feature one of Trump’s political rivals — the late Sen. John McCain.

VoteVets, a liberal advocacy group founded by Iraq and Afghanistan war veterans, are behind the effort to distribute shirts Thursday featuring the USS John McCain, a Navy destroyer, along with the words, “Big Bad John.” Jon Soltz, chairman of VoteVets, said the action is meant to be a show of inclusivity.

“While VoteVets and John McCain never much saw eye-to-eye on policy, and probably still would not if he was around today, his family’s service to America spoke to that sense of realizing this nation is bigger than just one man,” Soltz said in a statement. “Honoring that kind of legacy — especially of a political opponents — seemed fitting for July Fourth.”

The feud between Trump and McCain intensified during the 2016 presidential campaign, when Trump, referring to the Arizona Republican, said he liked “people that weren’t captured.” McCain, a Navy pilot, was held as a prisoner of war in Vietnam for more than five years.

Trump has continued to disparage McCain since his death in August 2018. During a rally in March, Trump said, “I wasn’t a fan of John McCain” and suggested he didn’t receive a thank you from McCain’s family after he “gave him the kind of funeral that he wanted.”

Last month, White House staff asked the Navy to hide the USS John McCain during Trump’s state visit to Japan, according to media reports. The destroyer is named for McCain, his father and grandfather, all of whom served in the Navy.

A statement from VoteVets didn’t mention the rivalry between the two men but said the shirts were meant to celebrate “coming together as a country.” VoteVets is a vocal critic of Trump and has filed multiple lawsuits against his administration.

The “Big Bad John” shirts were made by Rags of Honor, an apparel company that hires homeless veterans. All of the money from T-shirt sales will go to Rags of Honor, according to a statement.

“Whether it was Sen. McCain, his father, his grandfather or his sons, the McCain family has given more to this country than most, and America’s birthday seems like a great time to honor that service and sacrifice,” Mark Doyle, founder of Rags of Honor, said in a statement. “After all, people like them — and there aren’t many — made these kinds of celebrations possible.”

The shirts will be distributed in downtown Washington on the evening of July Fourth, ahead of “A Salute to America” — an elaborate event planned by Trump that includes music, military demonstrations and multiple flyovers of military aircraft followed by a fireworks display. Trump plans to address the nation from the Lincoln Memorial.