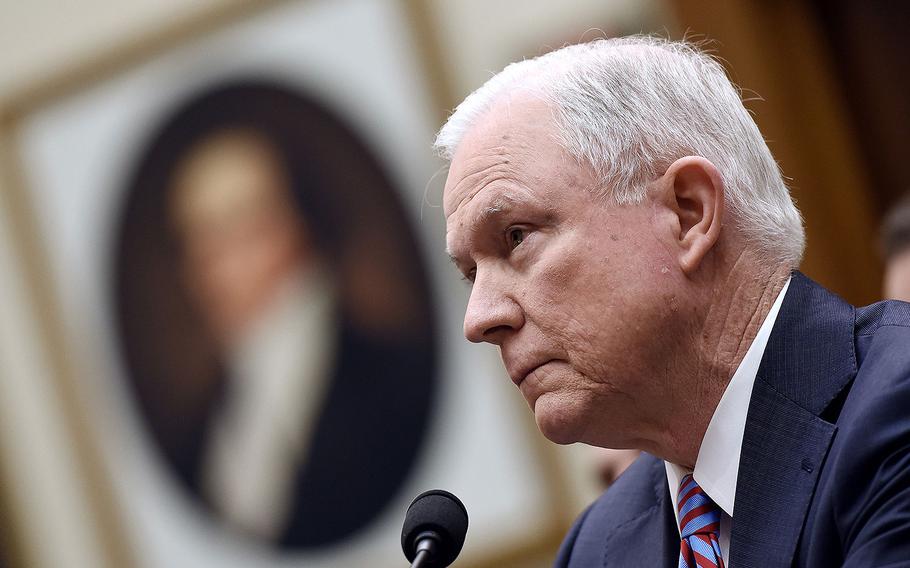 WASHINGTON — Just down the hall from where Attorney General Jeff Sessions told the House Judiciary Committee on Tuesday he would maintain current marijuana policies, a retired Navy SEAL, NFL lineman and two Republican lawmakers urged him and President Donald Trump to ease up.

Etten founded the Veterans Cannabis Project and has joined a growing number of veterans in Washington advocating for marijuana research. On Tuesday, he and former NFL lineman Kyle Turley, as well as other marijuana advocates, renewed a push for legislation to remove marijuana from the list of Schedule I drugs in order to expand research.

Drugs under that classification also include heroin, LSD and Ecstasy, and are designated as having no medical use.

Rep. Matt Gaetz, R-Fla., introduced a bill to reclassify marijuana as Schedule III, meaning it’s an accepted medical treatment, and Rep. Tom Garrett, R-Va., has a bill to remove marijuana from the federal controlled substances list. Both bills are stalled in the House.

“I would ask you to reach out to your subcommittee chairs, committee chairs, leadership of both parties, and say we just want an up or down vote, because that’s where this is stopped up,” Garrett said. “This is not a partisan issue. It’s a freedom issue, an individual liberty issue, a quality of life issue, a life or death issue.”

Etten wants marijuana to be federally legalized. He cited it as a potential alternative to addictive opioids for veterans struggling with chronic pain and other injuries and illnesses.

During Sessions’ testimony Tuesday, Rep. Steve Cohen, D-Tenn., a member of the House Judiciary Committee, brought up marijuana’s use as an alternative treatment option.

“Put your enforcement on crack, on cocaine, on meth, on opioids, and on heroin. Marijuana is the least bothersome of all,” Cohen said. “It allows people a way to relieve pain without using opioids. I would hope you’d look at that.”

Sessions responded that he and the Justice Department would be “looking at some rigorous analysis of marijuana usage.” “I’m not as optimistic as you,” he told Cohen.

Sessions has been a long-standing opponent of marijuana legalization and this summer sought authority to prosecute medical marijuana distributors. When Cohen asked him Tuesday if he agreed that marijuana is not as dangerous as heroin, Sessions said, “I think that is correct.” But, he said, it “still remains illegal.”

Etten plans to bring a team of lobbyists to Capitol Hill each month next year to talk to individual lawmakers and change their perceptions of marijuana. He’s one of many veterans who’ve come to Washington asking Congress to ease restrictions.

The American Legion has strongly advocated for more research into medical marijuana since May, and its membership adopted a resolution in August urging the Department of Veterans Affairs to allow doctors to discuss and recommend marijuana in states where it’s legal.

The Legion released a commissioned study earlier this month that found most veteran households, regardless of state, age or political affiliation, supported researching and legalizing medical marijuana.

Referencing those findings, Etten said, “To be pro-cannabis is to be pro-veteran.”

“For many of our veterans, coming home does not mean the war has ended. They continue to battle both physical and psychological wounds,” Etten said. “I started Veterans Cannabis Project to improve veterans’ quality of life, but I hope our work benefits all patients that rely on cannabis.”

Turley, who played eight seasons with the NFL, said Tuesday that “marijuana saved my life.” Turley was diagnosed with a degenerative brain disease found mostly in athletes and veterans and used marijuana to gradually stop taking opioids, he said.

“We’re not asking permission to use cannabis,” Turley said. “We’re demanding you look at the science.”