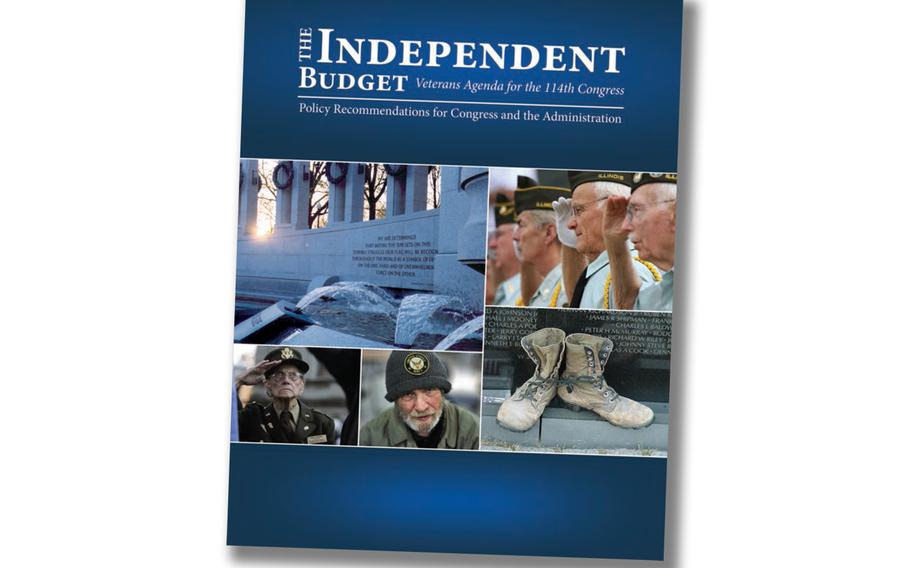 The Independent Budget – Veterans Agenda for the 114th Congress ()

WASHINGTON — Four of the nation’s top veterans service organizations said Thursday that the VA health care system is still underfunded and running the risk of new delays for care, despite a $16.3 billion shot in the arm last summer.

The nationwide system of hospitals serving nearly 9 million vets annually will run about $2 billion short of the money it needs this fiscal year — and could be significantly more after a wait-list scandal revealed much higher demand than the VA had acknowledged, according to American Veterans, Disabled American Veterans, Paralyzed Veterans of America and the VFW.

Furthermore, expanded vet access to outside care runs the risk of creating more delays without proper management and oversight, they said.

The concerns are part of the groups’ Independent Budget, a collaborative list of policy recommendations for the Department of Veterans Affairs and Congress that has been published annually for the past three decades. The document focuses on access, claims, infrastructure, caregiver support and women’s issues.

The shortfalls in VA funding “is a problem that has compounded over time” and began as early as 2000, said Carl Blake, associate executive director of government relations for Paralyzed Veterans of America.

The $16.3 billion Veterans Access, Choice and Accountability Act was an emergency measure that drastically increased the funding but is not enough to dig the department out of its funding hole, according to Blake.

The VA overhaul act was passed in a bipartisan vote in Congress after revelations of long waits at hospitals and clinics across the country and of manipulation of appointment records by management and staff to hide the delays.

The law pumped money into VA’s health care capacity, including $10 billion for veterans who needed to seek outside treatment due to long delays at department facilities.

VA’s admission late last year that it needs to hire as many as 28,000 new health care providers including doctors, nurses and therapists “clearly reflects the fact that VA has been left wanting for resources to appropriately build its capacity,” according to the policy document.

The groups acknowledge that the federal government is under pressure to rein in spending and that Congress has attempted more spending restraint. But they said vet health care outweighs those concerns.

“We certainly appreciate the fact that Congress provided approximately $5 billion to expand internal capacity, as well as supported other priorities” as part of the Veterans Access, Choice and Accountability Act passed in August, the groups said. “However, we also recognize that these resources will be released only slowly over an extended period of time while, demand for health care services will continue to grow. To satisfy this increased demand, new and sufficient resources must be found.”

VA has offered outside referrals to veterans who need specialty care not available in its system. The overhaul passed last summer dramatically increases access to that outside care to vets who wait too long or who live more than 40 miles from a VA facility.

The newly expanded program could cause “referral backlogs and persistent billing problems” that cause more access problems if VA does not provide appropriate staffing and oversight, the veterans groups said.

Increasing outside care could also undercut VA health treatment that cannot be found in civilian care, such as treatment for spinal cord injuries, they said.

“By sending veterans out of the system, they are abandoning a system that veterans rely on,” Blake said.

The department has launched a number of initiatives to hire more staff and reform its health care system to avoid the delays and records manipulation that was rampant a year ago.

Congress and its veterans affairs committees will likely look to the veterans organizations recommendations as it sets out on a new session and begins considering oversight of the overhaul law passed in August.