VA will extend benefits to all same-sex couples 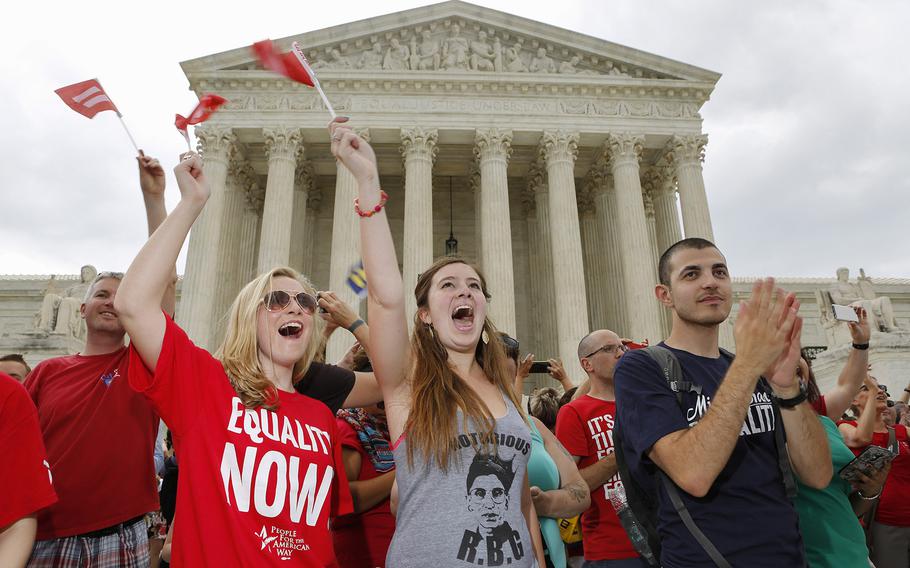 Supporters of gay marriage celebrate outside the Supreme Court on June 26, 2015 in Washington, D.C. The U.S. Supreme Court struck down bans on same-sex marriage in a historic 5-4 ruling. (Oliver Contreras/Zuma Press/TNS)

WASHINGTON — The Department of Veterans Affairs said Monday that same-sex couples in states across the country will now have access to a raft of denied benefits following the Supreme Court’s landmark marriage equality decision.

The couples will no longer be denied VA disability pay, home loan guarantees, death pensions and burial rights based on the laws of the states where they have lived and worked, the department announced.

A spokeswoman said the VA will send out new guidance to all staff and will temporarily halt any benefit applications that would have been denied under previous guidelines.

The VA had been issuing benefits only to same-sex partners who lived in a state that permitted gay marriage at the time of their union or who lived in one of those states during their service. But the Supreme Court effectively struck down state bans on same-sex marriage — though some have vowed challenges — and removed the basis for the department’s rules.

“VA will work quickly to ensure that all offices and employees are provided guidance on implementing this important decision with respect to all programs, statutes, and regulations administered by VA,” according to a statement.

The denial of benefits based on where same-veterans lived sparked outcry and lawsuits from advocates including Lambda Legal, a New York group focused on the civil rights of lesbian, gay, bisexual and transgender Americans.

Susan L. Sommer, the group’s director of constitutional litigation and senior counsel, said the VA had taken a number of steps to expand spouse benefits to same-sex couples. It created new guidelines after an Obama administration decision in 2011 to no longer fight challenges to the Defense of Marriage Act, which barred the government from recognizing the unions.

“But the VA had taken the position that its hands were tied with respect to some benefits that remain very important, including some survivor’s benefits and home loan guarantees,” Sommer said.

She said the VA change in policy announced Monday could affect thousands of veterans.

Lambda legal sued the VA in a Washington, D.C., federal circuit court over the denial of benefits based on state laws. The case was put on hold while the Supreme Court deliberated.

Now, the VA and the legal group have 30 days discuss the ruling and then return to the federal court with a plan on how to proceed. Sommer said Lambda Legal will also be looking closely at what the VA tells its staff about approving the benefits.

“We certainly want to see what the guidance is,” she said.