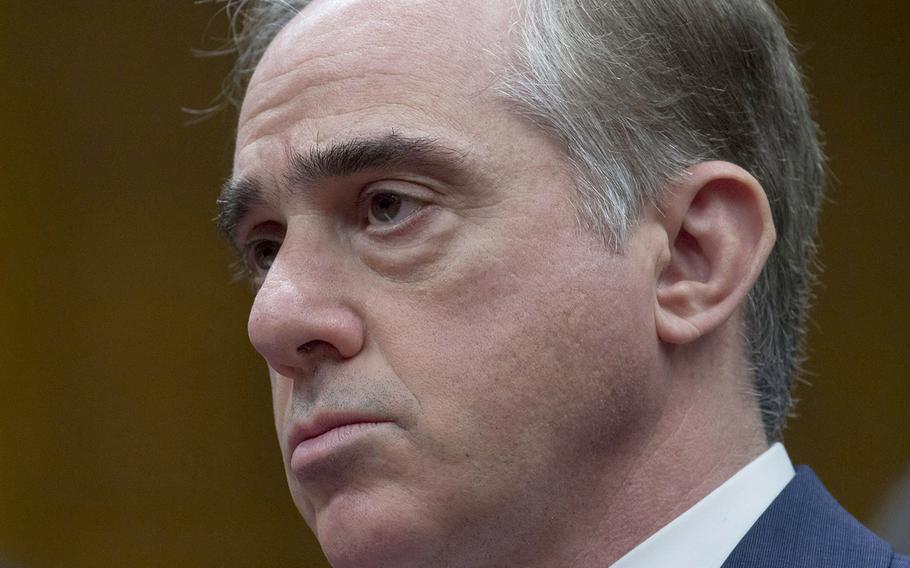 WASHINGTON – Department of Veterans Affairs Secretary David Shulkin improperly accepted two tickets to the Wimbledon tennis tournament for himself and his wife in July during an official trip to London, a VA watchdog said Wednesday in a 97-page report that also listed misconduct by the VA chief of staff.

The VA inspector general’s office released the report Wednesday – the result of five months of investigation into Shulkin’s 10-day European trip. The investigation was prompted by a Washington Post report in September that Shulkin and his wife spent much of the trip on leisure activities. The inspector general found “serious derelictions by VA personnel” and outlined five instances of poor judgment or misconduct by Shulkin and VA Chief of Staff Vivieca Wright Simpson.

Simpson doctored an email and sent it to Tammy Kennedy, the designated VA ethics official, as the basis for having the VA pay travel expenses for Shulkin’s wife, Merle Bari, the report stated. Simpson made it appear Shulkin would receive an award in Denmark – the pretext needed for Bari’s travel expenses to be approved. The VA paid more than $4,000 for Bari’s airline ticket – an expense that Kennedy said she wouldn’t have approved if she knew Shulkin was not receiving an award.

The inspector general shared the finding with the Department of Justice, which decided not to pursue criminal prosecution against Simpson “at this time,” the report states.

Investigators didn’t find any evidence that Shulkin knew of the altered email.

While in Europe, Victoria Gosling, who served as CEO of the 2016 Invictus Games in Orlando, Fla., gifted two tickets to Shulkin and his wife for the women’s final match at Wimbledon, and hosted them and their adult son for lunch, the report stated. The inspector general and the ethics counsel determined Shulkin shouldn’t have accepted the tickets.

Shulkin made an “inaccurate statement” about the trip during a public interview with The Washington Post in November, the report states. During the interview, Shulkin said he bought the Wimbledon tickets and asserted they were not a gift from anyone associated with the Invictus Games. He criticized Post reporters, stating they “didn’t do their homework.”

“The last time I checked, there’s nothing illegal about going to enjoy sporting events,” Shulkin said during the interview.

The European trip cost $122,334, and the report shows that full days of the 10-day trip were spent on leisure activities. The inspector general wrote they were unable to determine whether the cost of the trip was appropriate because of discrepancies in VA documentation. The issue will get a closer look by VA auditors, the report states.

Shulkin is expected to face lawmakers Thursday morning at a hearing of the House Committee on Veterans’ Affairs. The hearing was scheduled to discuss the VA’s proposed budget for fiscal 2019.

In a statement later Wednesday, leaders of the House and Senate VA committees said they were “disappointed by the details described in the IG report.” The statement was issued jointly by Rep. Phil Roe, R-Tenn.; Rep. Tim Walz, D-Minn.; Sen. Johnny Isakson, R-Ga.; and Sen. Jon Tester, D-Mont.

“We believe that public officials must be held to a higher standard, and whether intentional or not, misusing taxpayer dollars is unacceptable,” the statement reads. “We need to continue the progress we have made and not allow distractions to get in the way of helping our veterans. We’re counting on Dr. Shulkin to actively address all of the allegations outlined in this report. Our veterans deserve no less.”

In a statement Wednesday, Shulkin denied the allegations, stating simply: “I have done nothing wrong.”

“The report is neither accurate nor objective,” he said. “It is a direct assault on my spouse, my character and my unblemished record of service to veterans.”

In September, the VA pre-empted the Washington Post report about the European trip by posting Shulkin’s travel details online as an act of transparency. The itineraries show Shulkin hasn’t used private charter planes, as some of Trump’s other Cabinet members have.

Until recently, Shulkin -- a holdover from former President Barack Obama’s administration who was confirmed with unanimous support from the Senate -- has mostly stayed clear of the political discord that’s plagued other Cabinet members. But over the last few months, he’s faced an escalating level of controversy.

During a public hearing in December, Sen. Jerry Moran, R-Kan., accused Shulkin of double-talk and and blamed him for a rift between committee members that led to delays in Congress tackling reform to the VA Choice program, which allows veterans to seek private-sector medical care. Last week, The Washington Post reported that some in the White House wanted to remove Shulkin’s new deputy, Tom Bowman, as a “warning shot” to Shulkin for deviating from the administration’s plans on Choice reform.